Okay so I recently replace the rear shock absorbers and now every time I take a corner or when I’m going on a surface that’s not flat or just if I go over a bump too quick. I here squeaking sounds I replace the shock absorber as well as the strut mount to no avail I’ve found the noise I’ve located location of the squeak if where coil meets the mount I wanted to know what your guys opinions are. I don’t want to replace the coil it does look like it might need some replacing the protective metal sheet is gone on the top some of the bare metal is exposed but I would hate to replace the spring and have noise again

Did you replace the rubber spring mounts and other rubbery bits when changing the struts?
Most people don’t but it makes a big difference in ride and quietude, and in your case is probably the source of the creaking.

Rubber under compression “cold flows”, it changes shape to match the things that are compressing it. Over time, it then hardens to the new shape. Then, when reused, it doesn’t interface properly with the new configuration. Since it’s hardened, it has lost its elastomeric properties and, well, it can creak.

You can try this, but “@the same mountainbike” is correct. 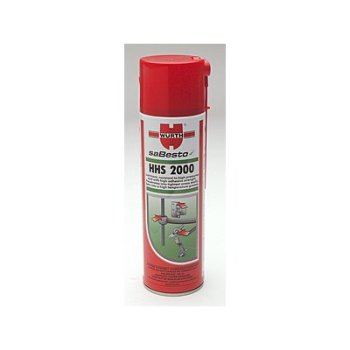 Please note that Wurth HHS-2000 has now been replaced by HHS-K, a new improved version. Wurth HHS-2000 / HHS-K lubricant is highly adhesive and resistant to high pressure. It penetrates into tight are ...

The HHS-2000 is supposed to stay on the rubber, penetrate and last. It’s made for your problem.

That’s because the spring mounts on the new struts aren’t exactly the same as the ones on the old struts, and the rubber has formed and hardened to fit the old mount. Your test, an excellent one by the way that I’ll probably steal in recommendations to other posters with similar problem, is sort of concrete evidence that my guess is correct.

Note that I’m interpreting your comment as meaning that you changed the rubbery parts that came with the strut and new upper mount, but not the rubber pads that cushion the springs in the strut’s spring mounts. Generally the spring pads need to be ordered separately, as do the bump-stops and (if you have them) bellows that protect the strut shaft.