If the toe is out by a significant amount, the tires going in different directions will put tension on the suspension and affect the camber appearance. Drive the vehicle backwards for 10 feet, get out and see if there is less negative camber.

I’ll be taking it for a small tour after my wife gets home. Just so I can see if there is any change from the other day cause of what I did. I will have to back up at least that to get outta the driveway so we will see soon. I’ll come back and post after.

So it has improved slightly. the tire is more on the ground now. I still have to fix the bit of toe on the one side and put that breathing rod back in that was mentioned earlier. I’ll have to see what it’s like on a longer journey. All I did was take it around the block.

Also, getting this right requires alignment tools, not something you can set by eye.

Sounds like it’s time to drop by an alignment shop and have them do one.

I think I’ll do just that, lol. It’s crazy to think back to all I have changed lately. I just did a rear wheel bearing in the driveway with no tools. That was crazy. I think I’ll let the pro’s do the alignment, lol.

Most wheel bearings on newer cars are unitized. And bolted in. How do you remove bolts with no tools? Is a jack a tool? Or a jack stand?

I just did a rear wheel bearing in the driveway with no tools.

How do you remove bolts with no tools?

Good question. But guess anything is possible, after all he thinks an Escape is a truck. Bless his heart.

Got my beer and jumped back in the truck.

Well, I went to Canadian tire to rent their slide hammer…that was a 90 buck deposit. Bought the wheel bearing, so, so far I think I am good to go. (I usually just replace the steering knuckle as it has the bearing already pressed into it) I get the slide hammer home and open it to find all it is is a slide hammer…no attachments to put it on the hub. I called them and they said that is how they always rented them. So i ditched that idea. (never again)

I went to YT watched a video of a guy pulling a hub out using the drum. So This is what I did:

Took the back tire off and the drum. Turned the drum around and put three lug nuts on it. I then started to pull the hub out. just snug with the snap ring. I didn’t know this at the time but you only have to pull the hub out far enough to get a pair of snap ring pliers in there to remove the snap ring. Once the snap ring is out and the wheel bearing is in bad enough shape, with a few more pulls it will fall out. So now you are left with the hub out and the outer race or outer encasement stuck inside the knuckle. With a dremel tool you can cut off the part that is stuck in the knuckle and the part that is stuck on the hub. I think it’s the inner race of the wheel bearing. With all that out you take the new wheel bearing out of the freezer just after you put some heat to the knuckle and press it in gently with a socket. Can’t remember the size now, lol.

That’s how I did it. the tire is tight and the back end is runnin good. I took nothing else apart on the back end. Even the axle stayed in place. Hell of a thing to do and I would not recommend it just cause of the shear damage to your hands from pulling the hub out.

Next time you get stuck in a diy’er repair, one idea, stop, then ask for advice here. Usually someone here will have had that same or similar problem before, and know the options what to do

There was a call on the Car Talk program years ago about removing a CV joint from a front axle. In that era some cars, CV removal was fairly easy, snap ring pliers then pull it off the axle by hand. CV joint remained useable. Other cars, even same car different model year, CV joint couldn’t be removed except by cutting it off, ruining the joint. Caller was asking Ray and Tom why removing CV joint was so difficult? Caller said he had a sawzall with metal cutting blade and using it to cut CV joint in half. But taking hours and hours. Ray explained w/that design better to just install a new half shaft … lol …

I hear ya. I coulda been done a lot different and simpler. Which next time I will do.

At least you were not having to wrestle a Subaru with protruding stub axles. Those had a roughly 6 MM hole drilled them and the inner joint (which also had a through hole) was held in place by a saw toothed DOJ pin.

Some mistakenly thought those holes were lined up and nothing could be further from the true. The beating of that small pin during a simple CV axle job at times led to broken transmission cases, ruined ring/pinion gears, ruined stub axles, etc, etc.
Sometimes the only way of getting it apart was with the acetylene wrench and that’s on the ones that are still salvageable. Broken case/ruined ring/pinions are often considered scrap due to sheer economics.

A hole on the stub axle and a hole on the CV joint has a slight bevel. Lining those bevels up on the same side is what would allow the DOJ pin to enter smoothly and many DIYers did not know this. Somebody blamed this one on the pin being the wrong size. With bevels lined up they tap right in with no problem. The hammer I generally use is a 3.5 ounce jeweler’s hammer. Some apparently resort to the bigger hammer technique… 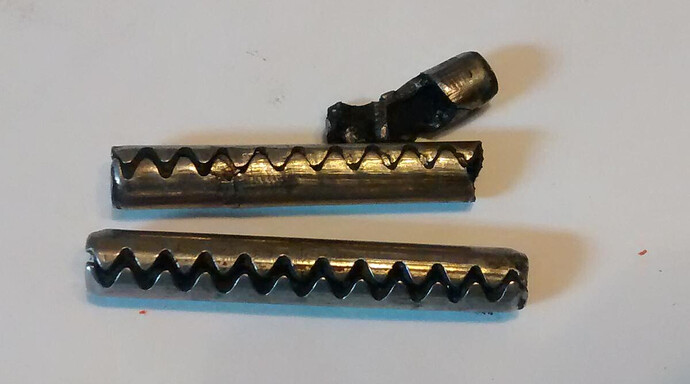 Sounds like a rough job. Glad I wasn’t doin it.

So I got the toe fixed and the camber on the one tire looks good actually. Plus I hooked up that breathing rod between the two boots. All in all, other than putting it in for an alignment, I think this is done. Now, I might change out the other inner tie rod end, not sure yet. It seemed fine today when I tugged on it and tried to move it.

breathing rod between the two boots.

Ah, so that’s what that tube is for. I don’t see it on the oem steering gear parts diagram for your car. Maybe not considered to be part of the steering gear. Thanks for the info!

A hole on the stub axle and a hole on the CV joint has a slight bevel. Lining those bevels up on the same side is what would allow the DOJ pin to enter smoothly and many DIYers did not know this.

I’m not exactly sure what you mean by the hole has a bevel. I presume you are saying the CV joint needs to be rotated w/respect the axle in a non-obvious way so the holes line up correctly, before the sawtooth pin can be easily extracted. Your comment about pounding on the pin so hard something else got broken reminds me of the time the brake rotor was stuck on my VW Rabbit’s hub. I pounded and pounded on that thing in every which direction wouldn’t budge. At some point I decided to heat it up. Still wouldn’t budge. Then about 20 minutes later, while laying under the car wondering what to try next, the rotor fell off the hub by itself, promptly landing on my leg … lol …

I don’t see it on the oem steering gear parts diagram for your car.

I will have to take another picture but on the 2002 ford escape v6 3.0l 4x4 on the front drivers side inner tie rod end boot. There is a rubber nub that sticks out of the back off it facing the engine. When i pulled the boot off, this rod came with it attached to the boot. The whole it feeds into is to dark and to small to tell where it is attached to.