So the other day I changed out the drivers side inner tie rod. That job went very good. I got the tie rod installed and I thought all was good. On the way to town however, I noticed that the wheel I had been working on had ALOT of positive Camber (bottom of the wheel out farther than top) So I searched on how to adjust the camber and came up short of nothing. Is there a way to adjust the camber or have I done something wrong putting the new inner tie rod in ??

I made sure it was turned into the steering part tight enough and that the outter tie rod was in the same position as the old one. I can’t figure out why the tire looks the way it does. Any help would be greatly appreciated.

You have to install a camber kit.

Why did I not need one with the old tie rod. Is it not a bit weird that now all of a sudden I need one. Could the new inner tie rod be effecting it at all. ??

positive Camber (bottom of the wheel out farther than top)

No, that is NEGative camber. Positive is top farther out than the bottom.

If you unbolted the strut or lower control arm at any point, the slop in the bolt holes allowed the camber. Jack it up, loosen the strut and let it hang loose and re-tighten OR loosen the control arm, push it in and tighten.

JUST changing the inner tie rod would not change camber.

Did you adjust the toe after replacing the tie rod?

@Mustangman I did not unbolt anything. I did however unbolt the strut yesterday and cleaned up the bolt holes and retightened it.

@texases No I did not have to adjust the toe at all, it looks fine.

Sounds like it’s time to drop by an alignment shop and have them do one.

I did however unbolt the strut yesterday and cleaned up the bolt holes and retightened it.

There is your problem…

Loosening and tighten the strut bolt shouldn’t effect the camber.

However, according this diagram, he upper control arms have eccentric bolts for adjusting the camber.Items 6. 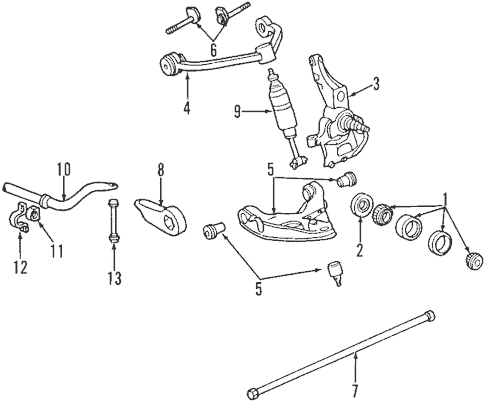 That picture is not a 2002 Ford Escape. The 2002 Escape front suspension is a coil over strut with a 2 bolt clevis attachment to the knuckle. And the bolt holes in the clevis bracket allows about 0.5 degrees of camber shift

This looks to be an Expedition SLA with torsion bar spring.

Do we know what year it is?

Do we know what year it is?

There is your problem…

Please explain ?? I did this after I had found the camber was off not before this problem.

Did you adjust the toe after replacing the tie rod?

Correction. I was out there today and did notice a bit of toe on the wheel in question but I have not adjusted that yet.

I did not unbolt anything. I did however unbolt the strut yesterday and cleaned up the bolt holes and retightened it.

How would I know that you found the camber problem BEFORE you loosened the strut?

Then it needs an alignment.

Again, just replacing the tie rod inner should not affect your camber. You did something else to affect it OR it was off to start OR you didn’t roll the car around after dropping it off the jack to relax it.

Also, getting this right requires alignment tools, not something you can set by eye.

I pulled into our local beerstore parking lot, found a spot, and as I pulled into that spot the steering became real loose. Got my beer and jumped back in the truck. I noticed my reflextion in the window as I turned the wheel and only one wheel was turning. Jumped back out and got underneath. Drivers side inner tie rod had snapped.

Got it towed home, jacked it up and took off the wheel. removed the boot and the broken crap. Replaced the inner tie rod end and put the old outer tie rod back as it was new the year before. Put the tire back on and took it off the jack. Went for a drive around the block and all seemed fine. Parked it and the next morning went to work.

Going around a corner on a bridge on the hiway, everytime it would go over a brdge section divider line the tire would squeel. Pulled of and noticed that a good 10% of the bottom outer portion of the tire was not touching the ground. Took it home removed the wheel and figured the camber would get adjusted by the two camber bolts at the bottom of the strut. Which, it does not. As already said here, you have to buy a camber wedge kit, which I did not know until I seen one at rockatuo and then confirmed here.

So, the second time I took the tire off I did loosen the two bolts at the bottom of the strut to take preasure off the knuckle, cleaned up the rust and tried to pull the top of the knucle out or hold it out as far as I could and then tightened the two bolts back up. Took it off the jack and it looks straight but I suppose it would just getting dropped off a jack. I have not drove it yet cause there is road construction out front of my house.

Well, maybe 5% of the tire wasn’t touching the ground. It wasn’t right anyway.