I flared/shaped a cunifer brake line to replace an old original brake line, and I cannot get the threads on the fitting to start grabbing into the brake master cylinder port threads. the simplest reason I think explains this is that the new cunifer line is going in the port at a slight angle so the fitting doesn’t get in all the way. Any other ideas welcome.

more details : I test-fitted the new line and fitting to the old brake master cylinder port with success. Two other old original brake system lines thread into the new cylinder as expected (in separate ports). I note that the new line, where it is supposed to connect to the cylinder port, appears pretty straight when held next to the old one, and the fitting slides back/forth without snagging. the bubble flare is not identical, but differs by less than 1mm in length. however, I tried two or three times so far, wiggling the line in between turning the fitting with my fingers, and also bending the line a bit more to get it to sit all the way down. this is troubling because while trying this, the fluid seeps out of the port, lubricating the fitting, and also making a puddle on the floor. The other two lines were done with minimal trouble. I also note the new cylinder has one of those plastic blue bleeder port fittings in it nice and snug. At worst, I hope to use the old line or get a new factory line. That’s enough detail for now.

If it is easy to run a factory line I would do that. If you mess up the mc threads it will leak and suck in air.

Did you coil the brake lines at the master cylinder? 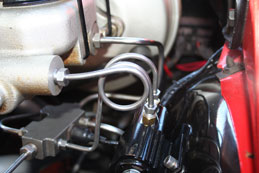 Are you sure the new fitting is the right thread. There are Metric and SAE lines.

@Tester no, but that looks brilliant to me.

@Yosemite pretty sure - note that I test fitted the line on the old removed cylinder, and it works perfect. Also the blue bleeder valves, being metric, fit perfectly in the ports.

@knfenimore the line is no longer available, so I’d use my old one in that case - I have to plan a testing session, and that is part of it.

Then here’s what to do.

A lock nut is just that.

You torque it to a certain spec and it locks.

But once you remove it, it’s no longer a lock nut.

I think Tester has the right procedure. I always turn the fitting slightly counter clockwise first until I can feel the thread catch a little, then clockwise to actually tighten it. It helps to prevent cross threading and sometimes helps get it started.

One difficulty is that brake fluid continually empties through the port while jiggling the fitting. I have tried keeping the reservoir cap tight, putting bags/absorbing materials below the work area and on the brake line - through which lots of fluid flows. This is a small nightmare.

Any tricks to keeping the fluid flow minimized?

BYW I loosened the cylinder, still can’t get the line on. Might make a new one. The old one - steel - goes on, but magically became bent while it was off.

Before you make a new line and double flare it, try the flare nut in the master cylinder without the line to be sure it’s the right thread. If it threads in good, then make up your line.

Great - I stripped it.

I guess my only hope is to tap it ( cylinder is aluminum ), either with the old line or new. I worked both on some way after I put the cylinder on the bench… I think the first run of thread only got damaged. It was a moment where I had nothing new to try, and then… I stopped after a 1/4-1/2 turn were complete.

Use the old nut to match your tap up. You may find a fitting that has that same thread and the nut goes into, then find a tap that fits that good thread.

I doubt that you’ll have the depth to get much of a tap in it, but if you do…go slow and only try to repair the threads that were damaged. If you go too deep, the tap will bottom out and strip all the threads.

If the threads on the MC are now stripped, replace the master cylinder with a new one. They usually aren’t overly expensive. Before you install the new MC, do a bench experiment first and make sure the new brake line fits nice and smooth into the threaded port where it goes. Do a visual to make sure the new line’s fitting threads aren’t corrupted too of course.

Since you are having so much difficulty – and let me tell you, you are not the only one who’s had this problem – I think what I’d do is install the MC on the firewall empty, and then you can figure out which direction the tube needs to be bent so it goes in straight. Without worrying about spilling the fluid I mean. At this point you should be able to thread the fitting into the MC by hand only, and only need to wrench it for the final tightening.

After that, remove the new MC, bench bleed it, then install everything, bleed the system, and you are done.

This all reminds me of a story. I was plumbing up some stuff under the kitchen sink and no matter what I did, one fitting would leak. I worked on it for a couple hours and gave up. My solution was to put a bucket under the sink and empty it out once in a while, but the spouse didn’t see things that way. So I called in a plumber, and he got out a mirror and a ruler (as a straight edge) and a bright light bar and was able to quickly show me I had the pipes aligned at a slight angle to the fitting, which was causing the leak. He had it fixed in like 10 minutes.

Been there, sometimes I feel like jethro in the beverly hillbillies, I done gradiated 6th grade and I can’t screw a nut on the bolt? Sometimes there is debris on the treads, sometimes it is a matter of goofing with it till the threads line up, been there, feel the pain!
And as stated previously make sure the threads are a match.

I can see two areas where the thread has been mashed. I’ll try to get a pic. What tap would be best to … fix … the threads - plug, tapered,…? Probably going with … tapered…

I have stated on JM 's many other brake threads that he should have a real brake shop take over.

Get a new fitting, see if it screws in well, if so cut the tube with a proper tube cutter, put on new fitting and flare the end. Assuming it is a flared fitting. Or buy a new line, and if thread is stripped on MC as suggested above replace both

At this point I’m going to side with @Volvo V70 and you should have the car towed to a mechanic.

I don’t mean to be insulting, but I think you need to find another hobby @Junior Mnit.