The owner claimed that he left his car parked next to a fire hydrant for FOUR DAYS because the battery in his key fob died. Then, a fire broke out in a nearby building, and this was the result.

He parked there at all was his first mistake. 4 days with no ticket?

I am sure the firefighters enjoyed busting those windows! I tip my hat to them. You just can’t overstress those hoses!

I know I have seen a number of pictures of similar incidents over the years… not always a BMW.

Seems to be a pretty common thing… SOME people just don’t have a clue! 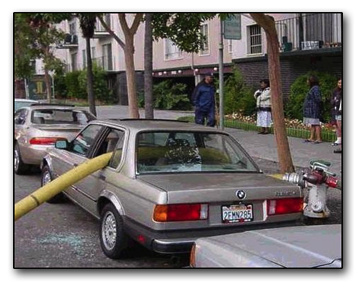 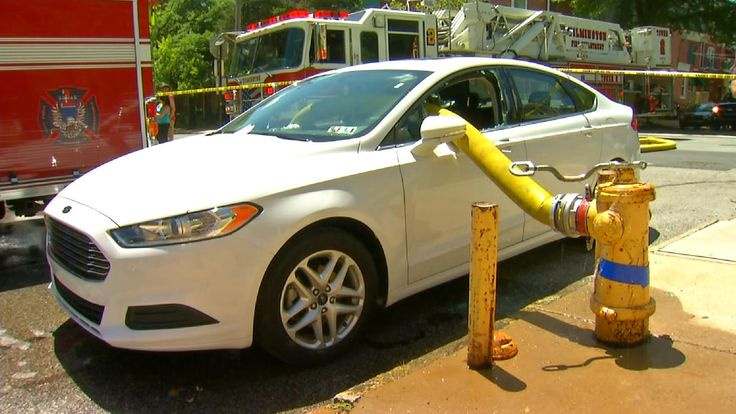 Since seconds can matter during a fire I have no sympathy for that guy. I tend to think that the key fob battery was just a lame excuse.
My dad went into a burning structure once and dragged someone out just in time so those seconds do matter.

This is what is known as justice.

I actually think the broken window method would be faster, and incidentally cause less damage to the car…

You’d think the dope could get a fob battery in four days, especially given where the car was parked. It’s a shame about the fine, though. It would have be at least $500. Also, I think this is the third or fourth time someone posted an event like this.

Depends on which type of fob the car has, As far as I can tell the battery for this fob is a rechargeable type that requires some soldering to replace. The comfort Access option uses a CR2032 battery which normally could be found just about anywhere. Amazon is giving estimated arrival for the rechargeable battery as fast as a week from Sunday, going into October for certain suppliers.
From one of the amazon listings
" The battery is used in Non-Comfort Access KeyFob. Please, notice that to replace the battery you’ll have to disassemble the Key Fob. Replacement also requires some technical abilities. If You are not sure that can correctly disassemble the Key Fob and install the battery, we recommend you to ask a specialist to help you. You would need to have some soldering skills in order to replace the battery"

Found this picture taken when we lived in our last house. As you can see when they built the neighborhood they put the fire hydrants on the house side of the sidewalk instead of at the parking strip. So I had a hydrant right off my front porch. Always thought that was odd.

Most people didn’t park right in front of it when they came over. 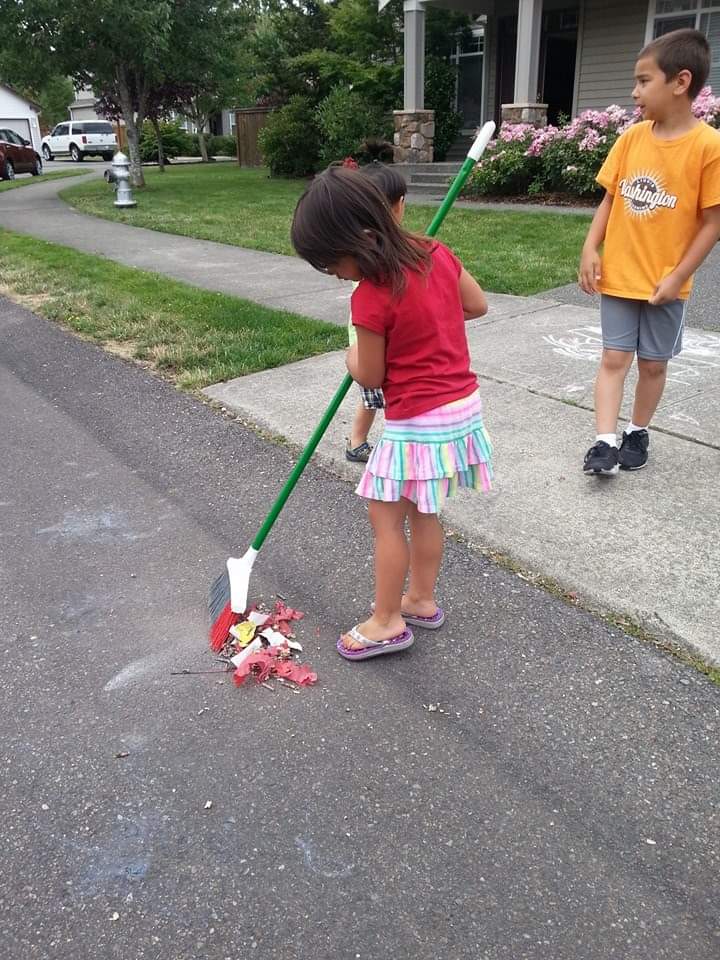 That is an odd location for the hydrant. I’ve never seen that done as that is homeowner property. Is that a city street or private street? If the latter then maybe I could understand it as there would be no city easement.

As for my father being a firefighter and using a firetruck to shove a car out of the way there was actually little to no damage done although the car owner would get up in arms over it. The vast majority of his time was spent on military bases so fire hydrant parking was not an issue.

Yes that was on a private street. But I still always wondered why they didn’t put the fire plugs on the parking strip instead of on my front lawn. I was at the cul de sac of the street so maybe that had something to do with it, the way they ran the lines or whatever. Anyway, sold that house in 2016 so it’s no longer my eyesore.

Just guessing but I think that is a private street built by the same people who put up the houses and for some godawful reason made that decision to put a fire hydrant in the yard.
Generally speaking, from the inside edge of the sidewalk to the edge of the street is city owned and that is why hydrants are placed there.

If you think the hydrant is bad you should see what someone did in a neighboring city. Nice neighborhood, brick homes, kept up well, etc.
Since this is Tornado Alley they decided to put in a storm shelter which is a great idea around here.
For some unexplicable reason they chose to put it in the front yard right in front of the entrance door.
This mound of dirt, with grass, is about 5 feet tall and 15 feet long. Air ventilation ducts on top and a steel door on the end.

It looks absolutely hideous and I do not understand why the back yard was not an option.
It’s grassed over and must be a royal pain to mow as it is roughly 60 degrees from horizontal on the sides and ends. If I were going to buy that house they would have to make some concessions on the asking price to factor in moving it or plowing it under.

I will offer an alternative explanation that might–or might not–be correct.
Isn’t it possible that the original land survey and the resulting construction plan might have been inaccurate/flawed, and that nobody acted in a timely manner to correct the inaccuracies before it was too late?

I find it hard to believe that those fire hydrants were intentionally placed on homeowners’ front lawns.

There was subdivision that put storm an sanitary sewers in the front yards, figuring if they had to repair them it would be less costly than digging up the street.

All of the storm sewers are next to the street in Maryland, not under the street. Even in urban areas, storm sewers are under the sidewalks. Maybe it’s different where you are. Winter freeze is never deep enough to mess with the sewer system. I can’t recall seeing storm sewer repair ever, and we have them over 100 years old in many areas. The only time they might dig the sewer lines up is to enlarge them.

Park next to a fire hydrant and win valuable prizes.

No accounting for what officials will do sometimes. In the small town where I live the city ran the main water line right down the middle of Maine street. Every time the pipe bursts up comes the asphalt and a 6 foot hole to access the line. After a leak 4 times in the same place the city didn’t even asphalt it anymore. They just left the dirt there; and in front of my house.

So a couple of years later it’s grassed over and before long there’s a 3 foot tree growing in the middle of the road. Before I could cut it someone ran it over but a few years later it was growing again. It only took another 7 years before they put asphalt over it.

I met a guy at the post office once who was looking for info about the water lines as they were about to do some construction. I provided a city map with all water/sewer lines on it and his first question was “What kind of morons would run a main line down the middle of Maine street. Are you sure?”. Yep, see those asphalt patches. Those are from fixing prior leaks. Rolls his eyes and thanks me for the map.
I just said good luck; you’re going to need it sorting this mess out.

@ok4450. My community in East Central Indiana runs the water lines right down the center of the streets.
Back in 1972, I bought a 1950 Chevrolet 1 ton pickup truck from a farmer who hadn’t used the truck in a year. There was a tool box on either side and a hitch on the back. The farmer who sold me the truck had bought the truck from another farmer and that was all I knew about its history until I flipped up the seat cushion. Under the seat was a complete map of all the water lines in my city. The truck had begun its life with the water works. The hitch was there to tow the compressor for the jackhammers.
I was sometimes tempted to rent a compressor and jackhammer, put up a barricade and dig a hole in the street. I would half fill in the hole and leave it that way. Nobody would know the difference.