Bizarre Issue, OUTSIDE of Windshield Fogging

So, fairly recently (last year or so) I had my windshield replaced- but I’m not sure that this problem started right away to my recollection, but that is also possible.

This is the weirdest problem I’ve ever had with a vehicle:

The OUTSIDE of my windshield keeps fogging. And I don’t mean a little fog, I mean it fogs so fast that even running the wipers can’t get rid of it fast enough.

It’s been going on for months. Doesn’t matter what the weather is, how humid, what season (winter, summer, etc).

I have tried the following:

NONE of these things have made the slightest difference.

To be clear, I’m not talking about “just a little fog.” In some cases the fog was so severe that I had to pull over because I was unable to see the line markers between lanes on the high (although admittedly, usually when I’m driving on the freeway, I’m going fast enough that the air flow removes the moisture.

I’ve asked several people as well as several mechanics, I’ve googled, and so far I’ve rarely found someone who’s heard of the issue much less how to solve it.

Can somebody please, please help me!

Are you having to ad engine coolant very often?

Is your windshield washer system working properly? With your key on, is it possible that your wasshers are emitting just a little bit of washer fluid?

Thanks for taking the time to respond!

The washer system puts out plenty of fluid; also one night when it was so bad I that couldn’t safely drive, I pulled over a gas station and thoroughly washed the glass with their cleaner. I also experimented by using dish soap on a quarter of the glass (to see if it was better compared to the unwashed side), and also - of course - washed the entire windshield multiple times with various products.

One thing I forgot to mention is that I haven’t tried Rain-X, which I think is my best bet.

I admit that part of this is solving the mystery!

Thanks for your suggestion!

Very interesting question! I don’t believe so, is your thinking that perhaps the coolant is leaking into the wiper reservoir?

Very interesting question! I don’t believe so, is your thinking that perhaps the coolant is leaking into the wiper reservoir?

No, My thinking was maybe a small coolant leak could be vaporizing and coming from under the back of the hood and landing on your windshield.

If this has been going on for a year, I would think you would have had to be adding coolant.

Oh duh, how would coolant be leaking into my windshield fluid reservoir

I’ll top off my coolant and check it every day, maybe I’ll notice a drop. Nice idea!

I’ll report back with my findings!

I noticed you listed every option with the defroster except turning it off… that’s your problem. It doesn’t need to be on.

Ah that was my bad, I never turn on the defroster unless the problem starts (and even then, not always), and I’ve tried all the non-defroster solutions I mentioned previously without the defroster running.

I should also mention that I tried the vent in each position (full vent, half-vent half-floor, full floor, half-floor half-defrost, and full defrost).

Hard to keep track of all the stuff I tried!

Thanks for the feedback!

Problem is on the outside, right? That sounds like a small coolant leak in the engine compartment. I’d have the cooling system pressure checked.

How about telling what this vehicle is and do you have auto climate control . Many vehicles run the air conditioner even when using the heat setting.
I think those saying you have coolant leak are correct.

There’s a trough below the windshield where the wiper linkage is located, 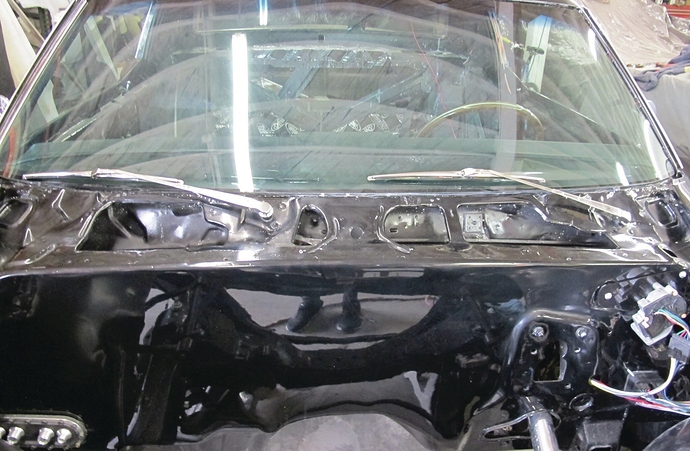 The drain holes for this trough can plug and the trough fills with water. Then as the engine heat starts heating this water up it starts to evaporate. This can then fog windshield very rapidly.

Check if there’s water standing in the trough.

Think of it as having a sauna below your windshield.

I had that symptom on my Corolla when the engine coolant fan malfunctioned and the radiator sprouted a leak. At first I thought it was just normal San Francisco fog, as it happened while driving there, but I then noticed the fog was only in front of the car, no fog out the side windows or rear window.

Check the blend door linkages underneath the dash and see if any are broken and all move at some point when the controls are adjusted, It sounds like a heater core pressure leak or the defrost or recirculation diverter door isn’t working. if it’s an older car or any honda there’s a valve that’s on the input heater hose that shuts down the flow when turned off heat it could get jammed also and cause hot air to push into the defrost vents because they are the first system it enters if all doors are shut from being turned off. Good luck and if all else fails try covering the vent grills for defrost, then the vents in front of the windshield, and see if either effect the fogging, if so then follow those ducts to see if anything stands out as not right. If able a year and model of car would help to advise.

None of this would account for fogging on the outside of the windshield. Also, hot air would reduce fogging, not cause it.

Not if the inside air has a lower humidity and temperature. What happens when warm moist air contacts a glass of ice tea, it water condenses onto the outside of the glass? The heater core inlet and outlet connections are directly below the windshield area on the firewall, along with the vent for the compartment the heater core sits inside of. A pressure leak in either system would cause the exterior vents (the grills by the wiper mounts on most conventional autos old enough to require new windshields and experience issues) to exhaust hot, moist air/steam out on the windshield. I admit that i’m just guessing the climate control was set to cool for most of the complaint term. It’s still pretty warm most places in Sept, making the inside of the car cooler than any vapor that is possibly released into its slipstream. As for the servos jamming on the blend doors if the wrong one gets stuck, any combination of things could happen, and recirculated air or fresh intake of air only really effects the rate the temp is effected. I’ve personally had a failed switch cause a/c to vent through the defrost vents and cause similar issues, and a pin hole in a copper heater core inlet mist the windshield under load but not idle, only reason it was obviously a leak was the experience to notice the smell and color refraction from the coolant. The rest is 2nd hand shop stories that at least can’t hurt to check if out of ideas.