Big Trucks in the Movies

A couple months ago, there was a thread about famous CARS in the movies, and the subject of trucks was brought up as well. In one of my postings I mentioned the Green Goblin “Happy-Toyz” truck from “Maximum Overdrive”, which I thought was a circa-1977 Kenworth W-900; sure looked like a KW to me. Someone else thought it was an Autocar. Still others think it was a 1977 White Western Star. Whatever it was, it sounded like it had an 8V-92 Detroit Diesel under its hood. Anyone know for sure what kind of truck this was? Year, make, model?

My second question is about a very old truck from a very old black-and-white Warner Bros. movie, “They Drive By Night”, from 1940. The movie, which starred George Raft and Humphrey Bogart, was about two independent truck-driving brothers, Joe and Paul Fabrini (Raft and Bogey). In the first part of the movie the two brothers take turns driving what looks to be an old Federal from the mid-to late 1920s. This truck had a rather unusual wheel layout compared to modern trucks: it was a single-unit “straight” truck, but instead of having 6 tires or 10 tires, it had 8. The front axle had 2 tires, the 2nd (drive) axle had 2 sets of duallies, and the 3rd axle appeared to be just a weight-bearing “tag” axle, with just 2 tires. I’d just like to know, does anyone know what make, model, and year that truck was? Was it a Federal from the 1920s? I’d be interested in knowing the answer. 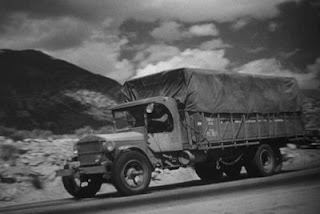 Thank you texases, I sure appreciate that. A 1922 Sterling; that is definitely the truck, and I remember that scene from the movie very well. TCM (Turner Classic Movies) just aired it earlier this week. You wouldn’t happen to know what engine/transmission it had, would you? I’m guessing a very large flat-head 6-cyl. gas engine, backed by a 5-speed tranny; probably had a top speed of around 40 mph, maybe? Anyway, thanks again for the info.

Drifter
I first saw that film when I was about 14 or so (which was MANY years ago), and it immediately became one of my favorites.

Today, it still ranks up there with the best–at least as far as I am concerned–along with I Am a Fugitive From a Chain Gang, The Grapes of Wrath, The Third Man, Sunset Boulevard, The Postman Always Rings Twice, Double Indemnity, and Casablanca.

It seems we have about the same taste in movies. The first time I saw “They Drive By Night” was way back when I was 13, and, same as you, it right away became one of my favorites. I also like all the other old black-and-white movies you’ve listed. Nothing like classic Film Noir. Thank goodness for TCM.

That reminded me of the Dennis Weaver movie “Duel”. It was evidently a menacing 55 Peterbilt.

Bing…just remember that Peterbuilt didn’t stand a chance v. Dennis 's Dart with his awesome slant six. It met it’s match in the end. How many cars do you know could climb a mountain while out of coolant ?

Slant six= iron motor! that old beast of a truck was a chompin on his heels though quite a bit.Just goes to show dont get the Juggernauts on your case-Kevin

That reminded me of the Dennis Weaver movie “Duel”. It was evidently a menacing 55 Peterbilt.

That movie put Steven Spielberg on the map. Became a cult classic.

Spielberg,eh?I never did really get to sit down and watch the movie,Mike.what did Dennis Weaver do to get on the truckers bad side.My oldest Brother loved that movie-Kevin

I don’t remember him doing anything wrong. It’s a good movie to watch. I was a huge Gunsmoke and McCloud fan…so I had see the movie when it came out.

Thanks,I guess it was just a case of “excuse me for living”-Kevin

“Maximum Overdrive” gave us one of the scariest trucks known to man, a black 1977 White Western Star 4864 that hauled Happy Toyz.”

Wikipedia just says it is a White Western Star 4800 series.
I can’t find anything on the power train.

Then there were the tv trucking shows in the 70’s. “Movin’ On” with Claude Akins, and “BJ and the Bear”. I think they were both KW trucks in those shows.

Let us not forget the '50s TV show, Cannonball, which was a Canadian production.
While I don’t know the exact details, I seem to recall that the tractor was a GMC cab-over.
This program was syndicated for a brief time in the NY Metro area, and while it lasted it was one of my favorite TV programs.