Battery failed in less than a year; bad luck or something else?

2009 Corolla LE, 118k, battery and alternator are both less than a year old, were installed at the same time. Got in it and it wouldn’t start. No prior symptoms. Terminals are clean. The clock even lost an hour and a half at some point. No changes in driving habits, no new accessories, beyond running AC. AAA guy found the alternator okay and the battery bad. Started with a jump pack. Drove it to our regular mechanic since he installed the battery. The car died pulling in to his lot. He says this indicates a bad alternator and I’m inclined to agree. He replaced the battery and alternator last year. I know stuff goes bad but how common is it for a battery or alternator to fail in less than a year? Am I just having bad luck or is there something else going on?

maybe you left the car on ignition

The problem might be when you jump started the dead battery, and immediately started driving the vehicle, you may have fried that new alternator.

Alternators are designed recharge a good battery after the engine is started, but they’re not battery chargers.

That’s why every alternator I install includes this warning. 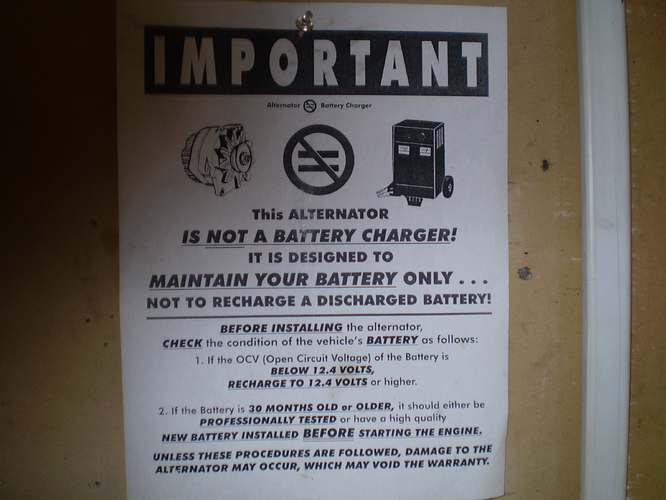 AAA guy tested both battery and alternator after the jump. Alternator tested good. Anyway it wouldn’t have kept running with both a bad battery and a bad alternator, right? I’m wondering if the electric power steering drew enough current while I was turning to kill the engine?

AAA guy tested both battery and alternator after the jump.

The alternator was working after the jump start.

I see. So the alternator self destructed in the process of driving a mile to the mechanic’s shop. Thanks. I had no idea they were that delicate.

maybe the belt was loose

You’ll want to find out the condition of the battery. Was it extremely discharged? If so, why? Will it recover and take a long slow charge and hold that charge? Once it has recovered, or been replaced, the alternator can be monitored while the engine is running. There may still be an electrical problem to find and fix: why that battery went bad.

There may still be an electrical problem to find and fix: why that battery went bad.

Thanks. That’s what I’d like to know. Something presumably caused the battery to go bad after less than a year. Curse/poltergeists/Martians? I hope our mechanic or someone can shed some light.

It’s not uncommon for some batteries to fail within a year. Or even 6 months. One battery I bought (Sears Die Hard) went to 100% garbage the day after I bought it.

And yes, an alternator can be killed pretty quickly by a junk battery or faulty electrical circuit. I don’t know that I would necesarrily rely on the word of a AAA guy about the alternator or battery. Maybe he knows what he’s talking about. Maybe not.

This is a Delco. I had assumed it was still a reputable brand but these days who can say? The old one was an Auto Zone battery and it lasted quite a while. I worked at J. C. Penney when I was in college back when they sold a battery with a lifetime warranty. Another guy who worked there had a whole collection of returned batteries.

We stock them at work . . . the ones with the blue label . . . so I have first hand knowledge. And my sample size is huge

If you had asked me before, I would have told you to RUN away from aftermarket AC Delco batteries

If my 2012 Camry battery goes I would love to be able to buy one just like the one that came with it. I have had the car since 2011 and it still has the original battery as does my daughters 2010 Corolla.

You’re kind of reinforcing what I said earlier.

I’m of the firm opinion that the best batteries are reserved for production lines, whether it’s Ford, Toyota, GM or what have you

Agreed- The battery in my 2004 PT Cruiser was 8 years old when it was totaled and was showing no signs of weakness.

. . . If you had asked me before, I would have told you to RUN away from aftermarket AC Delco batteries

Ugh. Well, that’s disappointing. Unfortunately I didn’t buy the battery, it’s what our mechanic installed last year when the alternator crapped out. Apparently both were bad. With any luck he’ll replace it under the warranty and I’ll only be out labor. And if it dies again I’ll go back to Auto Zone.

If my 2012 Camry battery goes I would love to be able to buy one just like the one that came with it. I have had the car since 2011 and it still has the original battery as does my daughters 2010 Corolla.

That would be nice. I wish I could find a battery like that. My 2009 Corolla is on its third battery that I know of.

Seems like toyota put a bunch of faulty alternators in the 2009 Corolla.

Mine is on its third alternator that I know of. I bought it with 58k on the on the odometer and had the alternator replaced the first time a bit past 100k. The second replacement was a year and a half later.

I’d always try a local auto electric shop to have a starter or alternator diagnosed and fixed, rather than buy a rebuilt, or a new off-brand. Too much quality inconsistency in both. And brand new from a dealer? Too expensive in my opinion, but probably top quality.