We just had a news report on oil sold at discount stores, Dollar General and others, does not meet current API specifications. On the back of the bottle it states for vehicles made before 1987. People are buying this and using it in their vehicles and the engines are seizing up. I wanted to warn others not to buy this oil. It does not have the API Star on the front of the bottle.

It would seem to me that most people who do their own oil changes would look carefully at the label on the bottle. I think most purchases at Dollar General of motor oil would be to top up the oil between changes. I don’t think one oil change with this outdated oil would cause an engine to sieze, although repeated use might cause the problem. I look for bargains, but I do read the labels. The engines that may be siezing up could be air cooled lawnmower engines. These engines run at higher temperatures than liquid cooled auto engines and need good lubrication.

About 20 years ago I bought a bottle of 30W “Rocky Top” motor oil at a truck stop in Tennessee as a novelty. The API rating was A. The very lowest rating. The current rating at the time was maybe SA or so. The stuff smelled like gear oil. I wouldn’t put in my lawn mower.

Penny-wise and pound foolish to buy motor oil at the dollar store!

I just looked for motor oil at the Dollar General web site and didn’t see any. (Search for “oil”)

This topic (or a similar one) comes up periodically and I find myself wondering the same thing over and over. Motor oil is so cheap, why would you ever use anything but a major name-brand oil in your car?

For my first car, an oil-burner 1957 Chevrolet, I bought “bulk oil” at Workingman’s Friend for 10 cents a quart. I think it was used oil that was drained out of cars and filtered. This car got about 30 miles to the quart. Once I saw a motorcycle who had been tailgating me down a hill run off the road when I got to the bottom and hit the gas feed.

Here is the story 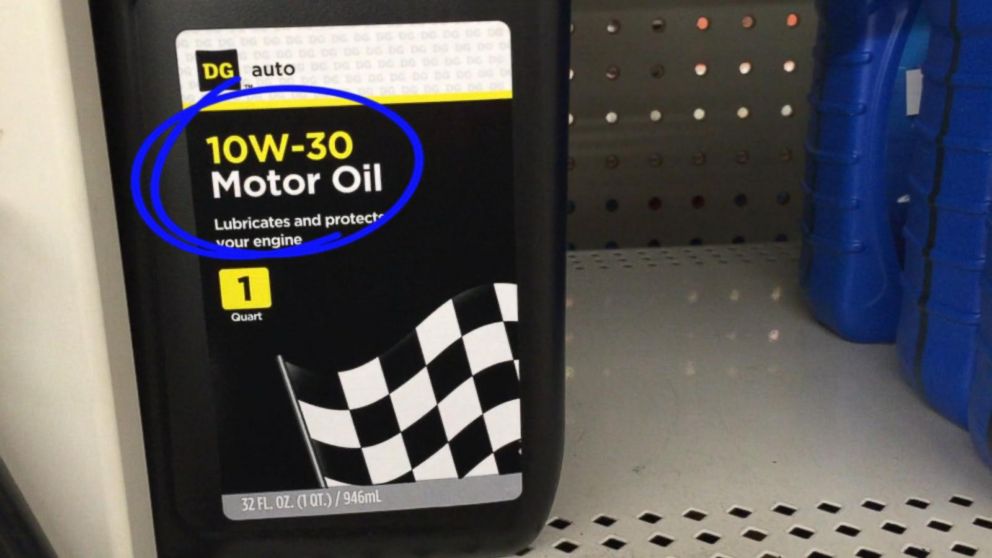 Consumers claims Dollar General motor oils are out of date and the chain failed to give adequate warning of that.

Some of this stuff is even recycled oil if you look at the label. I know one low cost brand (can’t remember the name) at Fleet Farm is cheap but recycled. I just buy Mobil and don’t worry about it. Last time I was in Dollar General I picked up a bottle of Tide. I thought it was a deal but problem was it was not current production and not HP. The deodorant seemed to work ok but wasn’t any cheaper than any place else. Then after spending 10 minuted for the clerk to check out, I just have never gone back and that’s just fine with me. Later the clerk was involved in a robbery scam so guess you get what you pay for.

I remember going into the Dollar Store and not finding any price tags on their stuff, I asked what the prices were? Duh, its the dollar store dummy, everything is a dollar. So I just stick with main stream stores with prices on stuff.

Just watched the video. Hilarious. I didn’t know who GMA was. Now I know Good Morning America. Who uses 10-30 anymore anyway? And the 30 weight? Not suitable for cars built after 1930? Can’t expect people to read the back of the label now can we? Case dismissed.

@Triedaq - Given everything oil is used for in the engine, I think defective oil could easily sieze an engine if used for a full oil change.

@texases you may be right. I am not about to try it in.my modern vehicles… I stopped using an independent shop where I had been a,customer for over 20. years. My vehicle calls for 0W-20 synthetic oil and specified that when I had the vehicle in for an oil change. When I was filing the invoice a month later, I,noticed that they had substituted 5W-30 synthetic. It was in the summertime, so I ran the car until fall when I had the dealer do the next oil change and did get 0W-20 in the crankcase. The independent shop had changed managers and when I was told I,needed a fuel injection flush and new,struts,on my other vehicle which my independent tire shop and the dealer said I,didn’t need, my former shop lost a customer. I wouldn’t even use this. DG oil in my,old lawnmower. I bought the mower in 1988. I thought last year would be its,last season, but I,switched from 30 weight heavy detergent to 10W-30_synthetic. The oil consumption went way down with the synthetic oil so I am going try to make it through this year without buying a,mower. Cheap oil made for 30 year old equipment is no bargain. Oil has really improved since 1987.

A couple years ago I went on a 5300 mile road trip.
Filled the crankcase with 10w-30 instead of the specified 5w-30, if only to make me feel better while driving 85mph for hours in warm weather.

Attached is what I think is a good primer on oils, as good as any I’ve veer seen. There’s a detail or two that one could quibble with, but it’s understandable by the average person and very informative.
http://www.carbibles.com/engineoil_bible.html

Unfortunately, very few people ever look at the bottle beyond the weight… if even that. And fewer still understand it. We here quibble and argue over esoteric details, but the average person sees a bottle with a number on it that they think they read in their Owners’ Manual and dumps it in, figuring “oil is oil”.

Actually, allow me to back up on that… the average person never reads his/her Owners’ Manual and has no clue where his/her dipstick or fill cap are. Manufacturers designing cars without dipsticks, expecting an idiot light to do all the work, will contribute to the problem. I’m in favor of idiot lights but only as a backup to manual monitoring hardware, not in place of. And Speedy lubes that draw all oil from their one or two 55gallon drum(s), well, I guess one is lucky if they replace the plug and don’t strip it… or cut a hole in their plastic splash pan.

Perhaps an electronic voice that, when you lift the hood, says “use only 5W30 oil of XX SAE grade oil” would help. The again, perhaps not.

The 40 weight non detergent is not even suitable for old lawn mower that call for 30 weight. It would be fine for an electric compressor though.

I would withhold judgement on that oil considering the actual reasons for any engine failures are not known. Granted, the motor oil may be crap but…

If someone buys a motor oil whose spec does not fit their engine then whose fault is it anyway if the engine goes belly-up. The one gentleman referred to in the story states that “he never thought to read…”. In other words, cheap price is his only requirement.
His engine quit but per the usual, the story does not say exactly why.

Maybe someone used that oil which then led to oil consumption which then led to a very low oil level and the engine being trashed. That falls back upon the person using the improper oil and not checking the oil level regularly.
There’s also the issue of not changing the oil often enough and the crap oil sludging up earlier than a proper synthetic or even dino oil.

If someone has a turbocharged car that specs high octane gas and they use 87 or lower and the engine croaks because of excessive pinging whose fault would that be.
They chose to cheap out so…

The 1997 Mazda Protege which my brother got rid of awhile back called for 10w30, I believe

In my neck of the woods, there are still lots of older vehicles on the road, which call for 10w30

The fact that Costco always stocks it should be saying something. And they stock just as much 10w30, as any other viscosity

as for that dollar store only selling stuff for a dollar, duh . . .

We have dollar stores here, and we also have 99 cent stores. The 99 cent store is a joke nowadays. It seems every time I go, more and more stuff is selling for CONSIDERABLY more than 99 cents. Should be called “99 cent and up store” :trollface:

The 99 cent stores around here sell $2.99/quart motor oil. Not a bargain at all

Just goes to show you need to actually read labels

We read the labels at the grocery store and choose accordingly, so we should do the same when we’re shopping for motor oil

API Service Classification for motor oil from 1979 to 1988 was “SF”, for oil up to the standards of that period. The “S” indicates it is rated for spark ignited engines, in a rating like “CJ” the “C” is for compression/diesel engines. From 2011 to date API SN is available, the Chevron oil that I buy at Costco has an API SN rating. Perhaps the DG purchasing agent didn’t know what he was ordering, just trying to cut the cost of the product.

The regular Costcos near me only sell 10W30 and 10W40 for non synthetic oil, a stack of each four feet high, they have Mobil 1 in popular grades. I always thought that was odd, perhaps most people who change their own oil have old vehicles or are buying 10W40 by mistake. The business center Costco has 5W20 and 5W30, these are the most common oil grades used during the last 15 years.

Toyota has gone to 0W20 on all its vehicles. I’m sure it’s due for startup wear and to increase mileage. The faster and easier it flows the less drag on components the better the mileage.

@“the same mountainbike”, some auto manufacturers do specify oil types, like European manufacturers that have extended oil changes. In their case, the synthetic they call for has to contain enough additives to keep the oil from breaking down during the long time between oil changes.