My daughter just had to renew her registration in washington state, and the cost iis $600 annually!! I nearly fell over in shock. My wife pays $67.00 per year here in Nj. What do you folks in other areas of the country pay?

In Florida, registration renewal is around $60 or so depending on vehicle weight and classification. Ohio was $35 or so 9 years ago. I think it is still similar.

New FL registrations tack on a $225 fee for a new plate. A transfer of a plate from a car you’ve sold to new car avoids that fee. It hits new people to the state and new car owners hard with the first registration but reasonable after.

I pay about $300 on one and $150 on the other in Minnesota. It’s based more on value down to about $35. South Dakota I think is about $80 but it’s too early in the year to hear their complaints.

It appears that 3 counties in Washington have an Excise tax based on the age and Manufactures price at new. That may explain the cost.

@old_mopar_guy Have her give a break down of the fees .

No personal property taxes for me, I am thankful, will have to look into how they figure that!

No personal property taxes for me, I am thankful, will have to look into how they figure that!

No but you have income taxes and we don’t, so there! And we also do not have sales tax so double there!!

Every municipality needs X dollars to meet the needs of the community. They derive that through taxes or other fees which in the end are also taxes

Some have income tax, property tax, real estate tax, sales tax and a bunch of other taxes but the rates may be lower on each of those than a place that only has a couple different taxes. In the end, the result is the same. X dollars needs to be raised…

That fee is divided in two parts, first part is fixed, and second part is a property tax, so total depends on the car’s value here in Calif. If politicos would allow me to re-register my 30 year old Corolla, annual fee would be about $250. 50 year old truck is around $200 as I recall. Newer more expensive cars I expect are considerably more expensive.

Around here, you could pay a couple thousand the first year on a new vehicle of around $40k. It drops off rapidly per year after that and settles in around the $500 mark for that same vehicle after 5 years.

However, there is no sales tax when you purchase the vehicle so it essentially gets amortized over the life of it. Those taxes go to your local municipality/schools so that’s another plus versus some state general fund…

The best thing is no emission tests.

I would not recommend a beetle even though they were improved from 59.

I would not recommend a beetle

Can’t dispute, Beetles not very robust, but my thinking is a dysfunctional sedan that is easy to source parts for is better than no sedan at all. And who doesn’t like the aroma of gasoline leaks? …lol …

NY $120 for a 2 year registration. And I pay 8.75 percent sales tax on the price of the car every time you buy one, new or used. The only exemption is for sales between family.

My daughter just had to renew her registration in washington state, and the cost iis $600 annually!!

She must live in the white area of the map, it’s the “Sound Transit District”

They have the pleasure of being taxed to build the commuter rail system.

I live just outside the district and my registration was $69 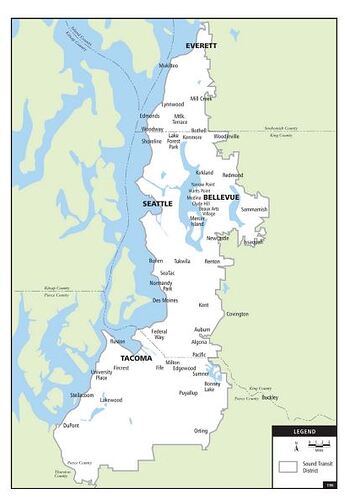 Do you put a sticker on the license plate to show registration is current?

Must be a fairly new car, here in WA registration and taxes are based on the value of the car, and if it’s a pickup then there is tonnage based on GVW. But that sounds about right. For example my 2006 SUV is $130/year, and my 2001 pickup is just a little less.

My wife drives a 2018 luxo SUV. We renewed the license for that a year ago when we still lived in OR. $200 for 2 years. She’s still driving around with the OR license plate, I’m in no hurry to pay $400+ to register the car here when the tabs are still good for another year.