Are there any safety features you like/dislike and would recommend keeping on/turning off?

I’m really curious about people’s opinions on this topic. I recently got a 2020 Camry LE which has new safety features my old car didn’t have. I was curious what safety features do people generally recommend using and which ones if any do people suggest turning off? I know there’s a lane assist feature I’ve seen mixed opinions on, it’s something where if you try to leave a lane the car will actually try to go back into the lane on it’s own. I’ve seen people not care for this feature much, because they said it was like having to fight the car almost, and having to basically overcorrect to try and counter this feature at times. I’ve also seen some post complaining about the Pre-Collision System Brake Assist in situations that could be dangerous and leave them to get hit. I wasn’t sure if that was something that should be disabled or not though. Are there any other features that people generally tend to want to turn off? Any features you’d consider too valuable to not have on? I’m curious since so much of this is new to me, and admittedly the idea a safety feature can actually cause me to be in a dangerous situation is worrisome.

I would read the owners manual on all those safety features, learn how they work, what to expect, and see if you can live with them. I think they’re unsafe often when the driver doesn’t understand what’s going on and overreacts. The lane departure system, for example, isn’t a problem if you signal your lane changes, a good thing.

I’ve also seen some post complaining about the Pre-Collision System Brake Assist in situations that could be dangerous and leave them to get hit.

Those complaints were mostly about the Tesla system . Just leave the safety systems on and you may not even notice them after a short period . If they do bother you after giving them a try then you can make your on choice.

Happy with all the latest safety features.

If the safety features are at all intrusive, I suggest you reevaluate how you drive. I don’t mean to be harsh but the systems are designed to protect you and designed for those who are driving correctly.

@texases has very good advice, read how the systems are supposed to work. Once you know what those systems expect from you…they might become indispensible.

I’m curious since so much of this is new to me, and admittedly the idea a safety feature can actually cause me to be in a dangerous situation is worrisome.

To somewhat answer your question, I believe that stability control and blind spot monitoring are the safety features shown to have the greatest positive effect.

Like I said, I have been turning off traction control in the snow for my fwd car anyway. Other cars may react differently. I don’t need the car to propel me to the curb when the wheels slip. I wouldn’t be fond of the lane assist either since you need to make quick moves to avoid debris in the road.

I will say blind spot indicators are very handy.

The lane assist cars I’ve driven either beep or shake the wheel a bit if I change lanes without signaling. Easy to override.

It doesn’t make sense to have these features and not use them. We have a few cars and other than one, the rest don’t have lane assist or blind spot monitoring. I am used to driving them, but when I get in the newer car with these features, I leave them on. For the lane assist, if you tap the turn signal when changing lane, it would not beep. I actually like it when I have the morning sun giving me a nasty glare on my drive to work. It is reassuring to know I am driving where I am supposed to be driving.

My ideal car is something like a Dodge Shadow or Dodge Spirit from the early 1990’s. The “safety features” in these cars included seat belts and a driver’s airbag. If you drive safely, always wear your seat belt, and exercise reasonable common sense, that’s really all you need.

I wouldn’t be fond of the lane assist either since you need to make quick moves to avoid debris in the road.

When I first bought my 2019 Toyota Corolla SE with lane assist and I experienced it for the first time, I was skeptical about it too based on that concept. Will it hinder an emergency maneuver, as in avoiding road debris? Well, I have found it not to be. If I’m just changing lanes, it’s usually a mild maneuver, and if I’m just lazily changing lanes without the turn signal; yeah, I get the thump on the wheel (or as I’ve now come to call it “a reminder to use the signal”…).

But, if I’m making an emergency lane change, it’s what I would call “a fight or flight” action (be it a mild one if I’m just trying to avoid some debris), and it’s a quick snap of the wheel, I cannot say I’ve even noticed that the lane assist even responded to such a quick action or I just did not notice it…

I keep my lane assist turned on. It’s like many, many years ago when my young son sat in his infant seat in the back seat (the old style infant seats with the steering wheel…) and he said, “Daddy, you didn’t use your turn signal…” 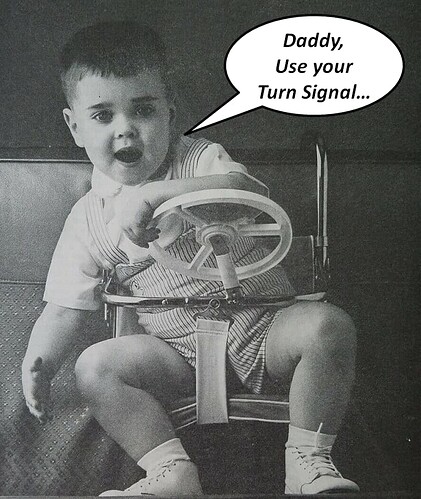 For me, the Lane Departure Warning, Pre-Collision Braking, and Blind Spot Monitors are nuisances and cause more problems than they purport to solve, so I disable these features when able.

I regularly change lanes without signaling and don’t like the feeling of the steering wheel fighting back. Not in heavy traffic, but if I’m on a quiet stretch of freeway I don’t really think the guy 20 car lengths back needs to know I’m moving out of his lane so I don’t bother signaling.

Brake assist also gets in my way, because the car doesn’t always know what I’m trying to do. Maybe I want to be snug up against the car in front of me because traffic is heavy. Maybe I’m weaving through traffic because I’m late for something.

Blind spot monitoring is also a distraction for me. If I forget to turn it off I’m constantly startled by orange lights flashing in my side view mirrors.

I regularly change lanes without signaling and don’t like the feeling of the steering wheel fighting back.

It’s good to know that you’ve never ever overlooked a car that’s gotten close to you. I’m not so perfect, so I’ll keep signaling.

That would be handy in fog or snow where you can’t see where the road is, so I’ll bite.

Coming back from Florida one time, the snow was so bad for the last ten miles the wife had to spot the reflectors on the mile posts to judge if we were on the road or not. Coming home from work one time I rolled my window down so I could see the weeds on the edge of the road. So yeah maybe that would be a nice feature.

That would be handy in fog or snow where you can’t see where the road is, so I’ll bite.

The forward recognition camera won’t see lane markers that you cannot see. The lack of rain in my area results in painted road lines to be dark and the lane keep assist system cannot identify these lines half of the time. In areas of road construction where old lane markers conflict with traffic flow, the lane keep assist system gets confused, nudging the steering into the wrong direction.

Well shelve that idea then. They have been installing rumble strips on the due of the road here and maybe other places, so in fog you can tell if you are on the edge of the road if you can’t see the fog line but in snow they don’t rumble so well. Just better to stay off the road but sometimes can’t.

I have blind spot and like it but have no experience with lane assist or braking.

There are lane tracking systems that along with lane guidelines follow the vehicle in front of yours, could this be a flawed process?

lane guidelines follow the vehicle in front of yours, could this be a flawed process

Back in the Spring, I rented a late-model Camry, which was the first car I had driven that had lane departure “steering assist”. I attempted to turn it off, but I found that rental cars are apparently configured differently–at the request of the rental company, I assume–and that it couldn’t be turned-off. Curiously, this rental Camry did not have auto stop/start.

All of that being said, my new car has every advanced safety feature that exists (the mfr calls them “driver assist”), and while it took a few days to become acclimated to them, I have found that I really like them. I do disable the AEB function and Parking Assist when I go to the car wash, simply because I don’t want the AEB to stop my vehicle when it detects the big brushes in front of my car, and I didn’t like how the PA system screamed at me on my first visit to the car wash because of the close quarters, but as soon as I exit the car wash, I turn both of those features back on.

I forgot about brake assist! I do have a car with that, the Audi. Brake assist goes straight to max brake ABS if it recognizes a panic stop.

Studies showed that people only braked about half as hard as the car could accept so accidents occured that did not need to. During an emergency brake, the driver should pound the brake pedal as hard as they can so the ABS engages for maximum braking.

I tested this on the Audi when I found out it had the feature. It works transparently but not intrusively. So I forgot it was even there.