So one of my hobbies is reminiscing about the good old days, back when you could go to KMart and get your oil changed, brake shoes relined and an alignment done all while you shopped waiting for the next blue light special to come across the intercom.

I found an ad from the 60s or 70s that advertised an alignment at Kmart for 4.99, on an odd sidenote it indicated that A/C equipped car would have costed 2.00 more for said alignment.

I just cannot figure out why. I Just simply cannot. It has been bugging me and has become a bit of a “puzzler”

For example, I bring my 65 Mustang in to have an alignment, it has A/C. It is no harder to align than a non A/C equivalent vehicle, is it? Did they just figure, ok moneybags, ypu have A/C you are going to pay up? 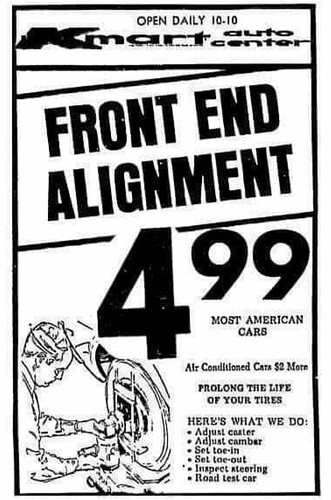 On many cars, especially GM cars that used an A-6 compressor, that compressor was mounted in a way that hampered access to the upper control arm adjustment points. Sometimes you would remove the belt and swing it out of the way.

So one of my hobbies is reminiscing about the good old days,

Maybe while you are doing that you might realize that the good old days just were not that good.

Problem is we don’t seem to have learned a thing and the kids of the guys the screwed up the old days are worse.

Maybe while you are doing that you might realize that the good old days just were not that good.

Well unfortunately you are correct. The Good old days were not that good. Unfortunately in my case they were still better than current days.

Oh what I wouldn’t give to go back even 20 years. 30 years back would be even better. Years wasted, tears tasted.

I like current times better. True, there’s a bit of a problem now with always being on the verge of contracting a deadly virus and ending up dead by the end of next week. But you gotta take the good w/the bad … lol . .

I think when people talk about the good old days, they tend to remember the good times they had back then versus everything else that was going on.

The internet is fantastic for finding parts and cars. And selling them. So easy to find buyers. If you have nice stuff. Hard to sell junk. Would have been great when I was 21.

In the “good old days” my father, with the same exact health issues I have, was dead already before he got as old as I am now. Why? Better medical care. My grandfather, his father, was dead before he got to 60, same reason. In the “good old days” that grandfather was dragged out of his house and sent to a concentration camp by the Nazis. In those same old days cars needed ball joints and valve jobs well before 60,000 miles and 100,000 miles was worth mention in the local newspaper. Today people don’t even know what the words “valve jobs” and “ball joints” mean.

they had to pay more because in the cars with A/C, the test drives always seemed to take half an hour longer…