Thanks for your input. I’m considering a purchase of an 04 Jaguar X-Type 3.0. The car is individually owned and has 65k miles. It is exactly what I would want for a weekend driver: color, accessories, price. Today, a dealer called me (not a Jag dealer- the car on his lot is a trade in) and told me I should buy from a dealer because I can purchase a warranty. He said Jags are expensive to repair and that a $11k car with 60k+ miles will need repairs. I felt a little pressured but did not day anything to him. My questions: is he correct? If so, and if I wanted to buy from the individual seller, is there a warranty I could purchase on my own? Would a warranty be worth the money and trouble? Thanks very much for your help!

An aftermarket warranty isn’t worth it. It’s just a very expensive insurance policyy that covers limited things, things unlikely to break. Put the money in a seperate account and call it “my extended warranty account”. Then you’ll have the money if you need it and still have it if you don’t. Why give it away before you even know if you need it?

Or, you could buy something with a better reliability record. A Consumer Reports from the local bookstore can help.

There is no such thing as a “warranty” you can buy. What is REALLY being offered is a pre-paid repair plan… It will cost 50% more that the average repairs required by your car. In the case of a Jag, it will not be cheap…

Also, the dealer is in all likelyhood trying to sell you a ‘third party’ warranty (not backed by Jaguar), which may be no different from one you could buy on your own. Neither are good, as described above.

And know that the X-Type is a heavily modified European Ford Mondeo, which we previously got over here as the Ford Contour.

In addition to the good advice from Caddyman and mountainbike, I want to add another caveat.
While Jaguars are not normally noted for having good reliability, the X-type is particularly unreliable, and, it isn’t really a Jag!

Under Ford’s ownership, many things at Jaguar were improved, but the introduction of the X-type was considered to be one of Ford’s big errors while managing things at Jaguar. This car is actually a re-badged Ford Mondeo, the European equivalent of the Ford Contour in the US. Yes, it has nicer upholstery than a Mondeo, but that is the essential difference–as was noted by every one of the British motoring magazines.

The Mondeo is a competent, although undistinguished car for the middle class. Attempting to convince Brits that this was a Jaguar was a massive failure. It looked too much like a Mondeo, and it drove too much like a Mondeo in order for most Brits to believe that it was worth 3 times as much as Mondeo. Even the addition of standard AWD did not convince many potential buyers of its worthiness, and those who did buy it were rewarded with repair costs even higher than for the real Jaguars.

I really think that you need to do your due diligence before spending your money on a car like this.

I would prefer to purchase a used car from a private owner as long as they took care of it. You can usually make a better deal on it and you can find out about the history of the car. You can also get your own service warranty for it. Possibly even from your insurance company. As the others stated though I think you are better off putting that money aside and have it ready when you need it. You most likely will be money ahead doing that. Extended warranties are limited, even the premium ones.

I agree with Caddyman. Don’t do it. My mother had always wanted a Jag, so in 1996 IIRC she bought a 1994 XJ12. The car drove magnificently, but it was a money pit. She kept it until around 2004 IIRC. During the last year she had it, it was in the shop no fewer than 30 days. There was never any catastrophic failures, but the cost of the parts to repair minor problems was ridiculous (think $75 for a windshield washer nozzle). The jag was replaced with 2004 Volvo C70 Convertible, which is also pricey to fix, but it’s frequency of repairs in much less than that of the Jag.

Another good point made by VDCdriver is that the X-Type is basically a Mondeo in drag. It’s sort of the Cadillac Cimarron of Jaguars.

stay away, a long way away from this.

Advice on used Jaguar purchase? Don’t buy a used Jaguar unless you make your living as a Jaguar mechanic!!!

I take issue with some of the opinions above. I have owned and loved a Jaguar X for three years; it had 60K on it when I bought it on the Net, and has 132K on it now. It is a WONDERFUL car; trim, athletic, responsive, comfortable and reliable (I have the 5 speed/2.5 litre V6). It is NOT a tarted-up Mondeo!!

I am also a proud owner of a x and s type. They are not expensive to fix and are reliable. A lot of people don’t like these cars and claim jags to be a higher quality ford. Lol witch isn’t the case by far. ford didn’t make jaguar they just owned them for a while. Everyone that has actually owned one loves them. Im happy to see someone speaking good about jaguar.

A lot of people don’t like these cars and claim jags to be a higher quality ford. Lol witch isn’t the case by far. ford didn’t make jaguar they just owned them for a while.

The facts beg to differ 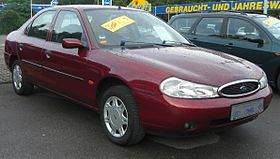 The Ford CDW27 platform is a former automobile platform produced by Ford in worldwide markets from 1993 to 2007. Used for midsize cars, the CDW27 architecture was a "world car" (co-designed by Ford and Mazda), becoming the second Ford world car (after the 1980 Ford Escort). The CDW architecture was developed over six years, costing $6 billion at the time of its 1993 launch; the shared development saved approximately 25% over developing separate vehicles for Ford and Ford of Europe. The Global...

It was even built at a Ford plant 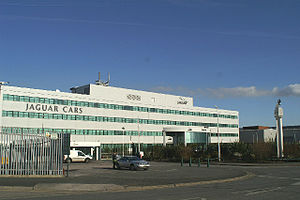 Halewood Body & Assembly is a Jaguar Land Rover production facility in Halewood, Merseyside, England, and forms the major part of the Halewood complex which is also occupied by Ford Motor Company who manufacture transmissions at the site. Halewood was originally opened by Ford on 2 October 1963, to build the then small-saloon Ford Anglia. Reflecting pressure on Ford of Britain's principal plant at Dagenham, the Halewood plant was also used for assembling the Ford Corsair between the model's 19...

I know Jaguar owners don’t want to admit it, but the X Type was heavily based on the Mondeo:

“The Jaguar X-Type, codenamed X400,[4] was launched in Summer 2001 to compete in the entry-level luxury class — a segment dominated by the rear-wheel drive BMW 3-series and Mercedes C-class. The program sought to bring a competitive product to the rear-drive market despite having no directly competitive platform, instead using a modified version of the front-drive Ford CD132 platform shared with the contemporary Ford Mondeo — with the addition of all-wheel drive, engineered to minimize front-wheel drive torque-steer and handling attributes.
As Jaguar’s first compact executive car since the Jaguar Mark 2 of 1959, the X-Type was the last Jaguar styled under the supervision of Geoff Lawson, with Wayne Burgess and Simon Butterworth as principal designers.
The four door sedan launched in 2001, and the five door estate followed in January 2004, with production of both ending in July 2009.[6] The sedan offered a Cd of 0.32 in standard form and 0.33 in Sport trim.
Initially, the X-Type was available only with all wheel drive, using a viscous center differential and splitting 60 percent of the torque to the rear wheels, 40 percent to the front (until slippage) — a benchmark for rear-drive feel in an awd system. The viscous coupling could fully transfer torque to either front or rear wheels to ensure grip. Steering was engineered to eliminate torque steer, typically associated with front-wheel-drive.
Engines included either of two V6 petrol engines: 2.5 litre or 3.0 litre. In 2002, an entry level 2.1 litre V6 front wheel drive model was added. All three engines were available with either five- speed automatic or five speed manual transmissions. The X-Type grille was slightly modified for both the 2004 and 2006 model years. The base petrol engine derived from the 2.5-liter that served in that Ford Contour, and the 3.0-liter V6 is essentially an adaptation of the base engine from the Jaguar S-Type and Lincoln LS.
Despite the X-Type’s critical importance to Jaguar and Ford’s Premier Automotive Group, and despite extensive engineering and testing, the X-Type was eventually “derided as little more than a reshelled Ford Mondeo.”
Eventually, the X-Type would become available with front-wheel drive and sluggish 2.0-litre petrol and diesel engines. In July 2009, Jaguar Land Rover announced the end of X-Type production by the end of 2009.”

Eventually, the X-Type would become available with front-wheel drive and sluggish 2.0-litre petrol and diesel engines.

What a cruel joke, to call such a vehicle a “Jaguar”

It seems they found their way again once the parent company cared about the original mission for Jaguar.