One item way down on the list of the url you posted is the starter operated by twisting the ignition key. This was introduced into the entire Chrysler line in 1949. Other cars activated the starter with a pushbutton, separate starter pedal, depressing the clutch and then exerting extra pressure, depressing the accelerator pedal. The Chrysler system gradually became a standard across the industry until the recent advent of the smart key and a pushbutton to start the engine.

The left hand threads on the left side were done so they would not vibrate off when loose. Worked well until some idiot at the gas station threw all the nuts in one hubcap when rotating the tires. Mopars had double leading shoe brakes that worked better than anyone else’s until power brakes came along. They leaned the slant six over to get longer intake runners for more torque- it worked too. I never had any trouble with the push button shifters-had 4 of them. Same with the 60-68 chokes. The ballast resistors were another matter, I used to carry a spare in the glovebox but hey- they were only $2.

It Wasn’t Unusual To See These Jet Engine Powered Chryslers On Woodward Avenue In Detroit In 63. 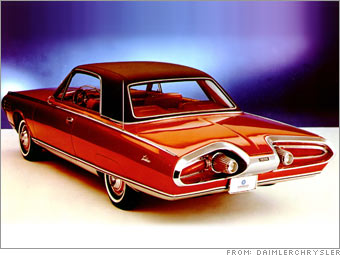 Taking all into consideration do we agree that Chrysler has had a postive impact on automotive design? On the labor front, for some reason I have know more current or ex Chrysler manufacturing employees than any other make.

As a teen I just loved looking at Ghrysler HP specs and Chrysler quarter mile times in the Hot Rod magazines. First manual trans car that a friend used to teach me how to drive was a 383-Road Runner, burned the tires in front of a cop and we all got to show our paprers.

We do. They’ve clearly had an impact throughout their lifespan. It’ll be interesting to see where they go from here with their new marriage to Fiat.

Hey Mountainbike, don’t make comments like that when I a’m drinking my favorite beverage.The laptop can’t take much liquid damage. As a former Fiat [Fix It Again Tony} mechanic, you might have hit the nail on the head. Fun to drive though! Don’t forget Chryslers’ left threaded lug-nuts. I guess after they observed that no one else’s lug-nuts spun off at speed, they decided they could cut out that expense. It sure impressed Daimler though.

My dad had a Fiat 124 Sport Spyder. I loved that car, perhaps because I loved my dad. I wish I had a restored one so I could feel like I was riding with him.

I think Chrysler did away with that technically-correct-but-unnatural counterclockwise stud idea because it was driving sales away. Too many were getting broken off, and everyone was saying "what the h***?).

No drinky-poo, learned my lesson. Ah, Fiat 124 spider.Double overhead cam with a five speed. That was back in the seventies. It took a long time for everyone else to catch up to Fiat. Back to Mopar. I’ll never forget racing a Chevelle driving the old man’s New Yorker with a 440. That thing would light up the tires like nothing else. When I stomped down on it, smoke {steam} rolled out from under the hood. I pulled over, and much to my amazement , the water pump churned up so much coolant that all the coolant hoses blew off.I ended up walking to the nearest house to call for help{tools]. I was invited into the house by the young lady, and to my surprise, every one was half-way through a strip poker game!Ten years later in another town, I became re-aquainted with one of the poker players. Small world!

You live a more interesting life than I do…

In my college days,while at home during break, I heard alot of tire squealing going on. I ask my Dad what was going on. He replied" a bunch of idiots are out on our street trying to impress your sister!" After a few martinis, my dad had had enough.He walked out the door,jumped into the New Yorker and promptly laid rubber down for an 1/8 mile down our road. Needless to say, that stopped the show,and Dad got back to his martinis!

In 1969 I went to the recycle plant (junk yard) looking for a part for my choke forr my 1964 Plymouth (the one that the bimetal coil was embedded in the manifold) . I asked the’yard man’ for the part. “Don’t have any all them sixes are on the road”!!!

Chrysler once had really good engineering…but as for quality control …if they got the righ hand door on the righthand side great… the fit wasn’t an item .

I believe that should be gear-reduction starter. They could get more torque from a smaller starter motor that way. Almost all starters have a gear to engage the flywheel.