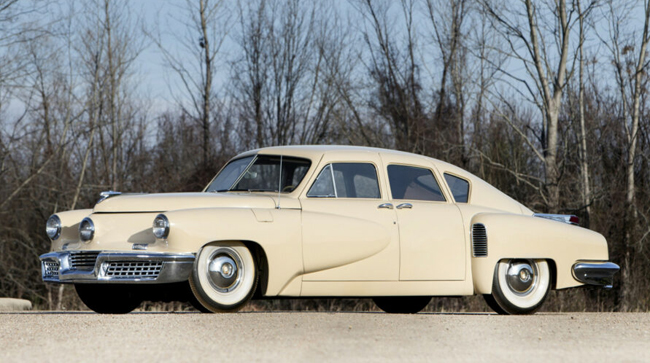 TUPELO, Miss. – Bonhams was tasked with auctioning the contents of the Tupelo Automobile Museum. Included in the sale was Museum founder Frank Spain’s crown jewel 1948 Tucker 48. The beige Tucker was one of only 51 ever assembled with only 47...

I am not surprised it sold for $2 Mill - one of 47 survivors and one of 51 ever built puts it in a very small pool.

This sort of thing is sort of like that Antiques Road Show on tv, interesting, and always makes me happy. Happy that I didn’t buy it. I can think of lots more fun things to do with $1.9 million … lol … Hopefully that car will go to another museum so folks interested in the make can have an opportunity to see one.

I have one of those in my old shed in the backyard… You mean they are actually worth something?

Huh? Wha? Oh my alarm clock just went off and its time to wake up out of this Tucker Dream I was obviously having…

That is surprising…those were gorgeous cars with beautiful engines

Highest technology of the day… straight 8’s with DOHC and 4 valves per cylinder and some with superchargers! Used as race engines if you could get your hands on one of the few produced.

If anyone’s ever in Lincoln NE, the Speedway Motors Museum has a Tucker: 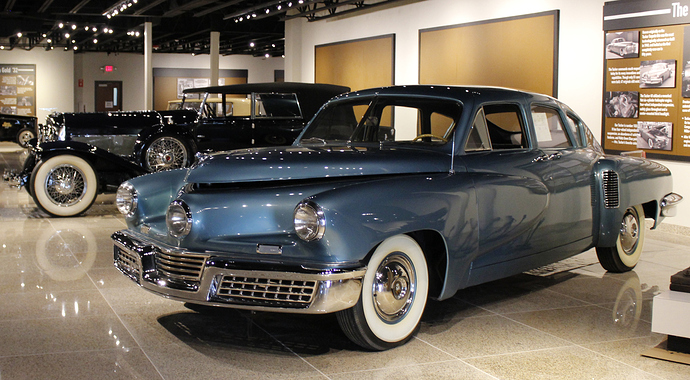 It also has tons of other fantastic vehicles that you really shouldn’t miss, including the Duesenberg Model J you can see in the background.

The Speedway Motors Museum of American is dedicated to preserving, interpreting and displaying physical items significant in racing and automotive history.

“Today offered for the first time in nearly a quarter-century, the Prince of Wales Berline retains its original chassis, firewall, engine, and coachwork, less only the front fenders, which are presently those from a Henney hearse. Some of the exterior trim, such as the running board trim strips and the original luggage rack, are missing, and the headlamps are incorrect later sealed-beam units. The drivetrain is largely complete, as is the interior, although there are some missing components to both, and some of the woodwork appears to have been dismantled; further, some of the gauges are incorrect. Overall the car is an excellent basis for extensive freshening and tour use, or an ideal beginning for a complete, concours-quality restoration, at the end of which it will be most certainly one of the finest and most beautiful Duesenberg sedans extant”

Overall the car is an excellent basis for extensive freshening and tour use, or an ideal beginning for a complete, concours-quality restoration, at the end of which it will be most certainly one of the finest and most beautiful Duesenberg sedans extant”

Translation: “You’ll never sell it for what you paid to restore it.”

Translation: “You’ll never sell it for what you paid to restore it.”

oh hell, if I had the kind of money needed to buy and restore a Duesenberg, I’d never sell it!

Good info, although I’m still surprised it sold under $500k

I wonder if anyone wanted the Leslie Special

I’m sure everyone has already found the site but it took me a while. Like so many things automotive and otherwise my tastes are somewhat inverse to most people. The Jaguar XK140 looked great in person but I imagine underneath the shine it was less than road ready.

I wonder if I’m related to Jay Leno? I could keep his shop swept and mopped in exchange for room and board and I’d test drive his cars for free. Maybe I’ll look into ancestry. Can’t hurt.

Leno has a staff on mechanics to keep everything running. Maybe you could walk through the front door and apply for a job. You have to live in LA, though.

I’d work for room and board @jtsanders. You’ve heard of ‘Chico and the Man’.’ Leno and the Old Man’ might make for a good ‘reality’ show. There’s an old Kombi van in Leno’s place somewhere.

Dad worked at gas station in high school just outside ny city. Used to service a dusenburg for rich old lady who lived in big mansion. Always picked it up for test drive. He had a v16 Lincoln that some guy had swapped in a ford flathead v8. Think he paid $75 for it.

I bought a Model A Touring car project from a gentleman in a small town near where I lived in 1975. He had a pair of Tuckers and (according to him) almost enough parts to put another one together in his shop. It was an ex-new car dealership. He and his brother had bought up a lot of remaining stock and tooling when the Tucker plant was closed. They also served as advisers on the movie “Preston Tucker a Man and His Dream”.

There is a long story of how the SEC and the “big three” conspired to shut Tucker down.

I visited him about a year ago when I was there on other business. He’s in his 90s now, and still the ultimate car guy.

There was a great deal of skullduggery by the Big3/4 and the truck industry as well @MG_McAnick. Someone had a link here about Detroit trashing urban rail systems for several decades long ago. The oil companies even got in on it. And the buying public’s preferences were and still are ignored while marketing generates trends that match what is most profitable for the manufacturers. The Chevrolet Cadet seemed to be a worthwhile project but GM was no determined to kill the idea of a compact economical car competing with their more profitable models 70 years ago that they have seemingly erased its existence.