I took a chance on the Ryobi 40V mower, and I’ve been so impressed that I’ve gotten the matching string trimmer, blower, and hedge trimmer. Some of my other friends/relatives have made the change too.
EV/battery powered stuff may not be the solution for every issue…but keep an open mind. It’s more capable than most people realize.

+1
Several years ago, I bought Ryobi’s 40V string trimmer, and I was so happy with its performance that I later bought their 40V leaf blower. These units are quite powerful, are much more quiet than gasoline-powered lawn equipment, and–of course–produce no noxious exhaust fumes. What’s not to like?

To me, the biggest plus of battery vs. gas is: it starts Every Time. No messing with bad gas, carburetors, oil, or any of that.

You just get to mow, or trim, or whatever.

And I have yet to have to replace a battery, unlike the old Ni-Cd drill days.

I looked at the electric (battery) riding mowers at Lowe’s. 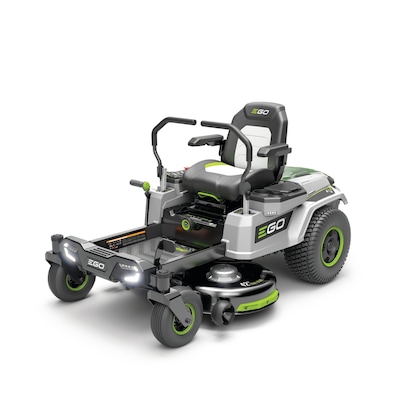 I’ve got an open mind, to some degree, but I wasn’t overly impressed. Cuts “up to 2 acres on a single charge”. Equivalent to a 22 hp gas engine. 42” deck. $5k. My yard is 3 acres, although I don’t have to mow the entire yard because part of it is forested. I might get to cut the entire yard on a single charge…it would be borderline. The 15 year old cub cadet with a 22 hp Briggs & Stratton engine and 50 inch deck that cost half as much is…fine…

I did consider a battery chainsaw earlier. Seems handy since I don’t use a saw often and I do get starting issues occasionally with saws since they sit unused. But, the guy at the saw shop told me the trees I’d be cutting were too big for a battery powered saw. I put a $35 carburetor on a free to me Poulan and it did…fine lol. 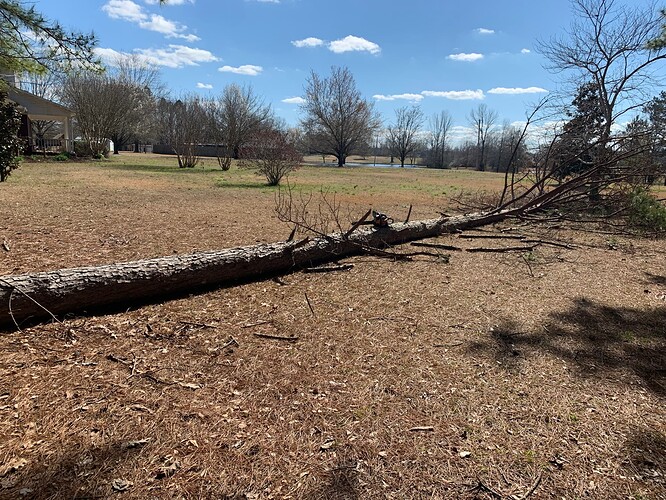 I don’t see a huge upside to the battery stuff. I can’t see the batteries lasting 10-15 years.

Well if you don’t think people have said Eva’s are the final solution, you haven’t been paying attention. For example cali has mandated all Eva’s by a certain date and the central committee has promised.

Yes I have quite a few battery powered tools but I am the decider on which is appropriate for me. My two of my chain saws are gas and one is battery. That’s the free market.

Well, respectfully, I suspect that CA is saying that all new equipment for sale has to be electric by a certain date.

All of the gas powered equipment out there is not going to just suddenly disappear overnight.

And I fully support your right to choose how and what to mow your yard with. That’s America.

I suspect that CA is saying that all new equipment for sale has to be electric by a certain date.

Going to be tough for a lawn service company. Not sure how that’ll work. Maybe buy their equipment out of state…? I’m not certain if they even make battery operated commercial duty lawn equipment, so maybe a lawn service would be exempt.

One thing I’ve wondered about is this and it’s not the “where is all the charging power going to come from” scenario.

Not long ago during an ice storm there was a traffic accident on I-40 west of OKC at dusk. Traffic was backed up for 9 miles. It was cold, precipitation falling, and pretty much dark.

So when the highways are full of EVs and there is an accident like this what is going to happen to all of those EVs sitting and creeping forward for hours with heaters, lights, wipers, etc running and batteries running down in droves?

I did consider a battery chainsaw earlier. … But, the guy at the saw shop told me the trees I’d be cutting were too big for a battery powered saw.

Concur w/advice about battery operated chainsaw, impractical except perhaps for trimming limbs. I have a corded electric chainsaw, seems to be as powerful as my gasoline version. Mostly used to size logs to fireplace size. I don’t think it would have any trouble cutting down the tree in the photo. The only compromise corded electric vs gasoline, I let the electric rest longer between cuts so the motor windings can cool down. I have a corded electric pole-mounted-chain saw too, which geezer-me finds really useful, safer b/c able stand w/both feet on ground when pruning smaller trees.

Fine for certain situations, yes. But not “fine” as a total replacement for gas powered vehicles. Not yet. Maybe not ever. Depends on the definition of “fine”.

I thought that was what I said, except that it isn’t the EV, it’s the choice to use them in a situation where they aren’t appropriate. That isn’t the EVs fault or the manufacturers fault. If I use a tack hammer to drive a ten penny nail and it doesn’t work is it the hammer’s fault? No, I should have known better and used a BFH.

except that it isn’t the EV, it’s the choice to use them in a situation where they aren’t appropriate

I follow you. I guess what I’m saying is there really isn’t a situation where the petrol engine isn’t appropriate. It kind of just works under any situation, practically. If an EV has to be used only under certain conditions, I see that as sort of a disadvantage. So, yes, it’s exactly the EV’s fault if it can’t be used in certain situations! My viewpoint, anyway.

I just wouldn’t want a vehicle that It would be my fault because “I shouldn’t have used it for that” - too rural of an area, etc. Now if I had a dedicated “commuter car”, (tack hammer), an EV might be ok. But I really don’t. I use my vehicles for everything. So instead of a tack hammer, and a framing hammer, and a sledge, I just own 3 medium sized hammers that I do everything with…and I guarantee these guys could’ve used them on patrol too. As long as they were chasing violators with old, slow cars

I don’t think it would have any trouble cutting down the tree in the photo.

Only issue would’ve been the need for a 300’ extension cord. Or a generator…but at that point, just use the gas saw! I do see the appeal for electric on something you don’t run often, though. Too bad they’re not ready for larger trees yet. I’ve spent more time replacing fuel lines and rebuilding carbs than I’ve spent cutting trees, probably. Oh well.

Bought an Electric lawnmower. Seems to do fine. Not sure how it is going to work out when we are gone for a month and buds brother comes to do the lawn, and not supposed to leave the battery on the charger after charged. Gave up on rechargeables many moons ago. Bought a 10" corded pole saw as husqueverna puked, and call the pros in for big stuff.

I do wish someone would give me a new Tesla so I could test the limits of its practicality, though. Scientific purposes only, of course.

I do wish someone would give me a new Tesla so I could test the limits of its practicality, though. Scientific purposes only, of course.

I would like that also but I have never seen a EV charger anywhere around here.

There’s one in town here with a Mustang Mach E seemingly constantly plugged into it. I wonder if overcharging is a thing? - If it can shorten the battery life.

if overcharging is a thing?

Don’t know if it is a thing or not but you would think as expensive as they are they would have built in protection to prevent overcharging.

Ryobi has an 18" brushless 40V chain saw now that can handle pretty big trees. I bought the first gen 40V chainsaw from Ryobi, came with a 12" bar and chain. I really like it and use it quite a bit. I haven’t used my 18 gas chain saw since I got it, I can cut down three trees with it before I can even get the gas saw started.

I let Ryobi know that I did not like their newer brushless 14" and 18" chain saws because the battery is behind the motor making it necessary to use two hands for the saw. My 12" has the battery on top of the motor so I can use it one handed.

Ryobi just came out with what they call a top saw. It has the handle in top of the motor and battery so it can be used one handed, very well balanced, but it only comes with a 12" bar and chain, it is meant for professional tree cutters that take a saw up with them to the tops of trees for limbing. Much safer than a gas saw. It is also brushless so it will have plenty of power.

Sthil also makes a line of battery powered chain saws geared more to the professional including a top saw like Ryobi’s, it also has a 12" bar and chain.

For example cali has mandated all Eva’s by a certain date and the central committee has promised.

Pretty sure that’s just vehicles, not yard equipment. But correct me if I’m wrong.

I have a corded electric pole-mounted-chain saw too, which geezer-me finds really useful, safer b/c able stand w/both feet on ground when pruning smaller trees.

I have a corded pole saw too, from Harbor Freight. It’s far superior to a conventional chain saw for a different type of use: Say you have a tall tree break with lots of branches in a tangled mess on the ground (big December storm in the Sierra Nevada caused a lot of that). The POLE saw allows me to cut the tangled mess of branches like a bowl of spaghetti, working my way into the pile from a distance. With a conventional saw, whether gas or corded electric, or battery, this is a back breaking job. MUCH easier with the reach of the pole saw. Even more important, it’s SAFER - being 6-10 feet away from the moving chain.

I do this also when I hire a pro tree guy, and pay him for what I can’t do - climb a tree and cut it into pieces to drop. Here also I use the pole saw to cut the branches short enough to drag onto a pile for chipping.