'L.A. to Vegas and Back by Electric Car: 8 Hours Driving; 5 More Plugged In'

I have said this for years. Until they get these to the point they will charge in 10 minutes or less and have the charger density the same as gas stations this will continue to be a niche market . Also I have not seen any longevity and or reliability studies on these things . For $40000 plus for a puny little car it should be warrantied for life as far as I’m concerned .

The promise of electric cars meeting the harsh light of reality.

Acceptable battery life is a long, long way from being viable.

One thing seldom mentioned is that the electrical grid is nowhere near capable enough to recharge countless millions of electric cars at once. Everyone gets home in the evening. connects the cars all at once, and the rolling blackouts begin.

A new grid will cost trillions and involve building many new power plants. Some won’t want nuclear, others don’t want coal, others don’t want hydro because of snail darters, and so on.
Many years ago the electric provider here in OK started construction on a nuclear power plant. After years of legal wrangling and fighting they threw in the towel after spending a 100 million or so trying to get it going.

Wind is not as viable as everyone thinks either as that requires input from the above mentioned power sources. Just a few weeks ago another one of the turbines about 3 miles from my house went down in a massive crash.
The center tube section started buckling and when that 200 tons or so up top started leaning it started snapping off all of the bolts holding the tubes together.
Six months ago another one lost a blade and sent it flying about 200 yards or so. Thankfully no one was under it when it came down. 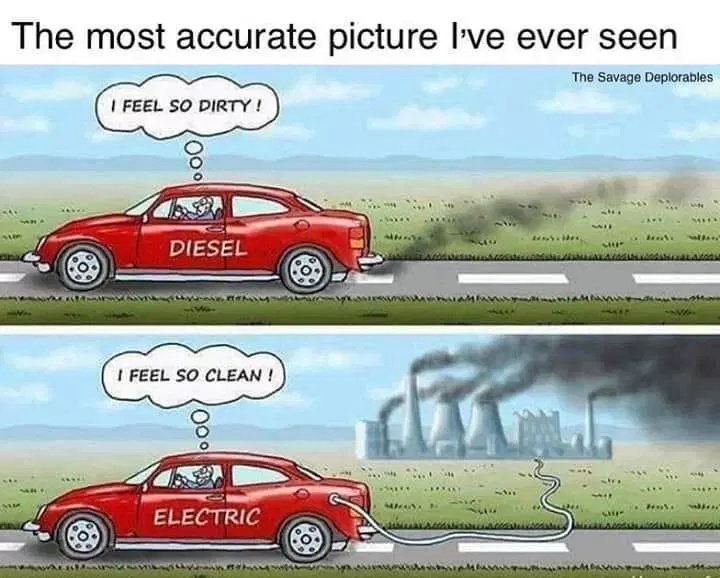 THAT right there. Follow the losses from wells to wheels!

While it is true that burning coal or natural gas produces pollutants, they are much easier to control and there is far less than from tailpipe emissions. Hydroelectric is pretty well tapped out in the US, and nuclear isn’t trusted will enough to ramp up anytime soon. It is not as simple as you guys make it seem.

I is not as simple as you guys make it seem.

I, for one, never thought you were simple!

I agree, it isn’t as simple as plugging the car in and driving. The electricity has to come from somewhere. Forgotten by many who don’t understand where the power originates and how it is transferred.

Nuclear fusion energy is the correct solution but it has been 40 years in the future for at least 50 of my years. Sort of like 5 minute fast charging. Well, that might be 20 years away.

In any event, Journalist Joe couldn’t pull off a theoretically possible trip from LA to.Vegas in the real world with his electric. Imagine some of our less automotively minded readers getting stuck with a dead EV in the Nevada desert.

How old was this article? Hasn’t GM already given up on the Bolt in particular and electric cars in general?

13 hours for a round trip is an hour longer than it takes me, it usually takes me 6 hours each way due to traffic congestion.

One can burn coal cleanly. It costs more than anyone wants to pay. Better yet you can capture its emissions to grow algae, press the algae for biodiesel.

The Volt and Cadillac’s ELR were cancelled. Those were better described as hybrids since they had an engine as well as electric motors.

The Bolt is still in production and has similar range to Tesla’s Model 3.

I’ve made that run between Vegas and LA a few times in the past couple of years. Seen quite a few Tesla’s making the trip as well.