Back again everyone, this time I’m wondering about the 5 ABS codes found by my obd2 scanner (see attached picture). My catalytic converter was cut off and stolen last week, so I’ve temporarily rigged up a straight pipe. Could that be what triggered all the ABS codes? 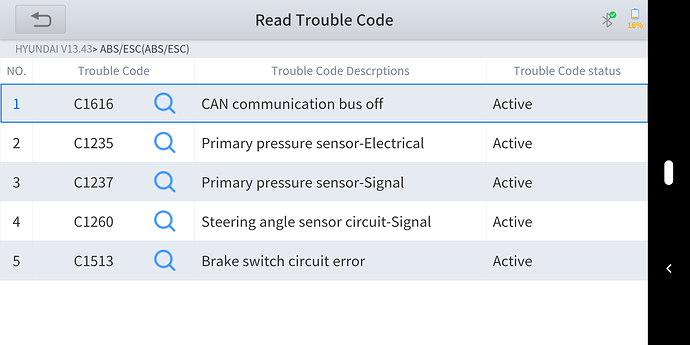 Is your ABS light on? Is your cel on? Do your brake lights work?

Based on the codes, I’d say you have a damaged wiring harness. Look for rodent chews.

Your missing cat will not set these codes. The thief might have damaged wiring when they chopped off your cat.

Got a pic of your exh work?

I’m guessing the key to the solution is fixing whatever’s causing the first code, the CAN bus problem. Once that’s addressed, the other codes will likely go away. The CAN bus isn’t the type of bus you can ride on of course. It’s a computer bus, wires in other words, that allows all of the car’s computers to communicate with each other. Suggest to look carefully in the area using good lighting where the cat was removed, temp repair effected, you may spot some melted wire insulation or cut wires or the like. Note that its possible the CAN bus circuity was damaged if a short circuit occurred. In which case the solution may involve replacing some of the car’s circuitry as well as wiring.

Seems like you’re another victim of modern car complexity. Neither of my two older cars sports the ABS function, so I have none of these codes to deal with, yet somehow I manage to have all 8 tires fully inflated most of the time … lol .

Thanks for the input… no check engine or abs light on dash and brake lights are working. I’ll give the wiring harness a good inspection

Here’s my temporary fix. The rear end cut took a 2 inch flexible pipe, and the front cut required a 2 1/8 inch flexible pipe because it was cut at an angle that wouldn’t allow a 2 inch pipe to slide over it. I then clamped the two pipes together. It’s much quieter now and ran just fine last night at 70 mph, so it’ll do for now 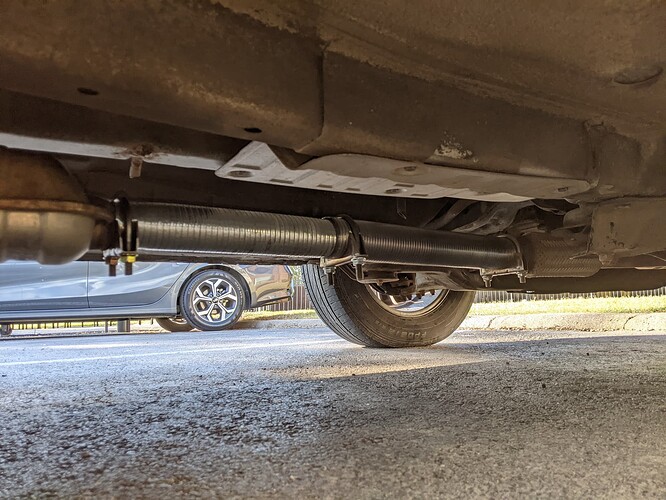 Lol thanks for the advice, I’ll start by working on that first code. That’d be nice if it resolved the other errors. Better to only fix one than all five right?

I expect you already know this OP, but if you live in an emissions-checking state, you run the risk of an expensive ticket if caught driving with the cat bypassed. Suggest to at least keep paperwork in the car to show you are in the process of replacing the cat. A copy of the advert for the cat you are planning to purchase, for example. Politicians refer to this technique as “maintaining plausible deniability”.