doing research into the Cobra Jet 248 and SCJ 428. i haven’t had that much luck in finding out what i want to know besides specs and links to ebay for 428.

I would like to compare the cost of building the engine into a 428 CJ (or SCJ) compared to supercharging (and/or stroking) a 4.6 or 5.4L triton motors.

maybe even a HP comparison.

Of course, when you get into wanting to make “big power” you essentially lose your privilege to decent fuel economy. I don’t particularly forsee long

distance travels. I just would like something that will put a grin on my face when I mash the throttle. Really, an old school engine compared to modern

I had seen a NA 428 rated at 525hp (crate engine) and that’s the only specs i could see. someone else said that the superchraged version of the 5.4L Triton

are capable of 700hp (not sure about factory ratings).

Tips, Knowledge, AND OPINIONS are welcome. Thank you!!

The 332-352-360-390-406 428 series of Ford Big Blocks are all essentially the same…They just juggled bore and stroke dimensions…The 427 racing engine is also of this family but has a unique short stroke-big bore design with a completely different crankshaft and heads…Getting 700 HP out of a 428 is largely a dream, the basic design will simply not support it…Cobra Jet and SCJ were largely marketing hype…The 427 COULD produce those numbers IF you had enough money. Making Fords go fast has always cost a lot of money…

Today, I’m SURE a carefully built 5.4 Triton motor could produce satisfying power for a FRACTION of what it would cost to build up an old 390-428 Thunder-Chugger 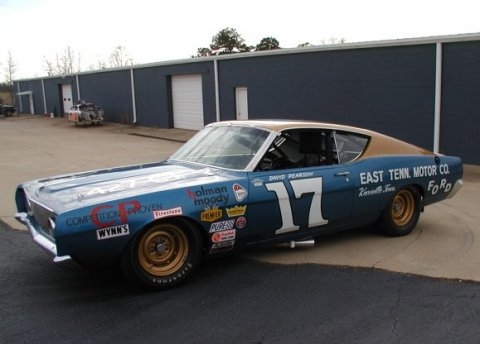 Learn more about Real 1968 Holman-Moody NASCAR Torino 427… on Bring a Trailer, the home of the best vintage and classic cars online.

Pretty sure you can’t build your existing 360 into a 428. To get anything with major hp would likely cost more than a good crate engine. Lots of sources for those.

I’ve got several Ford engine books with a ton of specs, casting numbers, and so on. Just a quick skim shows the 428 is basically a bored and stroked 390, stroked 406, or bored 410. The end result is the same on cubic inches.

Building this into an CJ/SCJ clone could get extremely expensive and honestly not worth it. Building a beefy 428 not to CJ specs could be viable. Cylinder heads and valve sizes, exhaust manifolds, intakes, connecting rods, camshaft, etc. are different from one 428 variant to the next.
The CJ/SCJ engine block is shown to be a standard FE block but the nodularity content of the block and rods is different. The connecting rods are shown to be Police Interceptor rods with the PI engine being different compared to the standard 428.

Those books have a ton of info and I didn’t dwell too much on it but maybe the above can give you a feel about the direction you’re considering.

Personally, I’m a big fan of More is Better when it comes to cubic inches and wish you luck.
Some guy in northeastern OK has a street car Chevy and I think that thing has over 800 cubic inches. It’s basically a de-tuned pro-mod block that “only” puts out about 1100 horsepower to make it more civilized…

With the 4.6 you’re going to be looking at 2 valve, 3 valve, and 4 valve variants. (GT, Mach 1 and cobra mustangs). They’re pretty pricey to build from scratch. A friend has a 2000 gt supercharged with about 400 to the wheels. Quite fast. From my understanding though you could build a 302 to make some pretty serious hp for cheaper than the modern modular ford v8 stuff.

The 360 is a truck motor and is basically a bored out 352. The unclear part to me is the reference to being a destroked 390 which could be taken to mean that someone has modified the 390 rather than using a bored 352 block.

It’s pretty mind-numbing as a quick glance shows (I didn’t count them all) about 130-140 different engine block casting numbers for the FE series engines.

Even using the existing engine block, conversion to a SCJ standard would be difficult and godawful expensive due to issues like rods and cylinder heads.
It would probably require selling the farm as a first step…

I have quite a bit of experience with big block Fords but it has been a few decades back. I owned a 1963 Galaxie 352 2V (slug). And a 1963 Galaxie 406 3X2V 405hp cross bolt main bearing (screamer)! I remember the 360 being popular for late model modified circle track due to their forged steel crank and high RPM capability. You may be able to get 400hp with cam, induction, and exhaust mods but Ford FE performance parts are now rare and expensive. By the way I have never heard of a 1969 Ford Explorer. Is it a stretched Bronco?

I looked up 1969 Ford Explorer and discovered it is a pickup truck. I learned something today.

@sgtrock, my first car was a '58 Thunderbird with a 352-4V and slug is the appropriate word.
I do love those '63 Galaxies; the prettiest cars that Ford Motor Company ever built IMO.

WARNING! Head and intake manifold swaps can be problematic. Remember that the 1969 drive train was not designed for 400+hp. Don’t even consider 2X4V high rise. I tried that after my 406 was converted to 427. It is not streetable! I ended up with Shelby sidewinder manifold and single Holly 750cfm. I’m thinking mild performance cam, Holley 650cfm, headers, and sweet sounding exhaust might put that grin on your face.

There’s no substitute for cubic inches! That said, as many here posted, you have a tough road to travel if you want to do anything with the 360. Fords have never been as “universal” as Chevies for fitting heads and cranks and such. A 460 pulled from a car or truck from the 70’s can be modded to be a torque monster but forget it ever being a high reving, high HP screamer. With Edelbrock aluminum heads and manifold and cam, you could easily see 450 Hp and 500 ft-lbs. If the truck is a 3/4 ton, the driveline should hold up, 1/2 ton, not so much.

yeah, ford 360 and 390 motors are pretty much the same and parts are interchangeable. my first 1975 ford supercab was an Explorer Custom, which had a 390 car motor, and was a much nicer truck than my current 1975 supercab which is a Ranger. the ranger is an f100 the explorer was a f150, I believe.

the transmission was a 3 speed manual, but not the typical ford 3-speed. it was a heavy duty german3-speed that was only 18" long. I have good stories about that transmission…, and one bad one that left me locked up, for a few seconds at 65mph on rt 6 ? , I think, on cape cod. I had an epic search around Plymouth , MA. looking for a replacement. I finally found one in an old junkyard around Plymouth. it was in an old van, that had a good sized tree growing up thru the middle of it.

a good young “jeep guy” mechanic worked on that for me in Plymouth. he sent the old german tranny I d found and had that re built for me. I should recommend him in the mech. files. he was really sharp and charged me fair prices. I remember that he had an old willeys jeep with snorkel and all waterproof stuff on it that he was working on for a customer.

How about ditching the 360, locating a 460, and throw a stroker kit into the 460? There’s a kit available that will bump the cubic inches up to about 557.
That should make your truck the biggest, meanest dog on the block and shorten rear tire lifespan a bit…

“Speed costs money. How fast do you want to go?”

Smokey Yunick said you could get 400HP out of a 360,Mr Ligenfelter and Mr Yunick are my idols-Kevin

great info. the truck does have quite a bit of sentimental value as my late father bought it new in '69. aside from eventually putting a crown vic suspension on it to lower it, i wanted to leave the rest relatively the same. though it’d be cool to have a 428 but with all the original 360 badging. i know the 460 produces some serious power.

how about Triton power? especially supercharged? i tried to look up costs for both a 428 build up and a SC Triton build up. didn’t have very good luck. I don’t know if my wife and i will eventually wanna take road trips in it. with that being said, i don’t wanna regret having a 428 on the highway.

any personal opinions on this? THANKS!!

Go with the suspension,upgrade,but why not hop up the 360? these trucks dont weigh much and 20-30% power upgrade will make a serious differnce,put everything aluminum you can and look to reduce the weight on the front end of the vehicle and there is always STS turbos-I expect at 5# boost you would have problems keeping tread on the rear tires-Kevin