I’ve come unto possession of a 1999 Pontiac Grand Prix SE 3.1
Car was always garaged and only has 48k miles on it.
I have no way of knowing how old the current belt is and I’m a bit apprehensive about ignoring it, even though it looks to be in perfect shape.
I may remove it and make a close inspection.
Would you replace it without hesitation?

If you don’t how old the belt actually is, then yes.

Same for the hoses and tires.

I’m actually blown away by how all the rubber on the car is still soft and supple.

I’m not a gambler, so I will change the belt

I may remove it and make a close inspection.
Would you replace it without hesitation?

Looking at the belt will not really tell you much . Just replace it . Also you should change coolant , brake fluid and transmission fluid. I would also check the date on the tires ( a Google search will show how to read the tire date ).

I’ve done a complete flush and fill on the coolant already.
The brake fluid is in pristine condition as is the trans fluid.
But I will be doing a trans fluid and filter change this spring before it hits the road.
The tires are from 2013 but have at least 95% or more of tread and the little vent spews sticking out on the sides. They are not dry rotted in the least.

The brake fluid is in pristine condition as is the trans fluid.

Both of those fluids should be changed every 3 years, and their appearance means very little. Brake fluid is hygroscopic, meaning that it absorbs moisture, and that is NOT good.

The trans fluid’s additives are mostly depleted after 3 years or so, and as a result it is important to change the fluid–even if it looks “normal”–in order to prevent trans problems.

tranny fluid depleted even if the car is just sitting??

Would you replace it without hesitation?

With only 48Kmiles, and I didn’t have high expectations for the vehicle b/c I didn’t cost too much used, I’d probably remove & inspect the belt. If it looked ok, I’d just put it back on. Unlike timing belt, while S-belt failure may cause engine to stop, it usually doesn’t cause major engine damage. If you go this route, look at both side of belts, while bending it. If you see considerable cracking of the rubber, best at that point to replace both the belt and tensioner.

Replacing the belt of course is the less risky option. But if you want to worry about the car’s rubber components, the low hanging fruit isn’t the S-belt. It’s the tires.

If you go this route, look at both side of belts, while bending it. If you see considerable cracking of the rubber, best at that point to replace both the belt and tensioner.

You can’t determine if a serpentine belt is worn or not by visual inspection anymore. 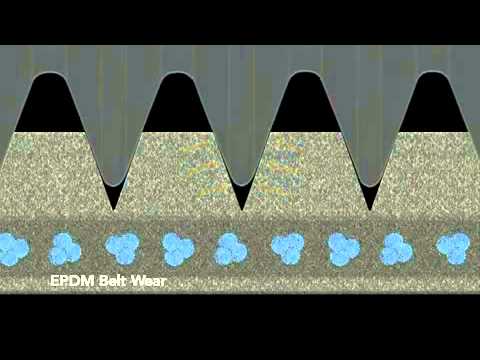 I’m a guy that does pre emptive replacement because I don’t want to be in the middle of Kansas or Indiana with a common item that fails. I rarely let a belt go beyond 40 or 50 k or 3 to 4 years without replacing. When I had the car at the dealer last time for fluid changes, I said I know it’s ok yet but put a new belt on anyway. I think it was less than $70. If all you do is drive around town who cares.

It is harder to tell these days. Belts are much better and have extended service intervals. The serpentine belt on my 2020 Durango is 10 years or 150000 miles . The wifes van has the original on a 2014 annd I have had it checked multiple times at the dealer and they say it is fine and it is a 2014 with 130000 miles on it .

This is simple applied economics …

The if the belt brakes while you’re driving the cost of a tow is about $300. The cost of a new belt, which is easy to DIY install, is about $20.

Likewise the tires are about 10 years old, twice the recomended replacement age and I’ll bet the spare is the same age as the car, 23 years old. The iceing on the cake is that sometimes you don’t always see the cracking from hardening rubber which can result in chunks of rubber coming off while you’re driving. At the very least I’d suggest looking for tire sales with an eye towards replacement in the very near future. (And you’ll probably find that the handling improves too)

Finally, I’d take a close look at all the other rubber/plastic tubes/seals for any signs of cracking/leaking. Trust me, it’s a lot easier doing repairs in 50 degree weather than it is in 20 degree weather.

Bottom line, it’s almost always cheaper and safer to fix a problem before it fails.

The iceing on the cake is that sometimes you don’t always see the cracking from hardening rubber which can result in chunks of rubber coming off while you’re driving.

That’s old school where the rubber stays strong but becomes damaged due to becoming hard. It typically would happen when the rubber is cold making the rubber harder and the tire was low on air. The rubber on modern tires deteriorates and loses strength before it’s even old enough to become hard. It will start cracking.

Make sure the spare tire has air in it or the cracking won’t show up.

You can always get the new belt and keep it in the trunk with the right tools needed to replace it.

edit: I wonder if the day will come when cars will have a bad belt detector sensor next to the belt that detects frayed rubber or missing sections of the belt. We already have the tire pressure monitoring. It’s the kind of thing someone would patent and then try to make in to a safety thing that has to be installed.

Just change it or have your mechanic change it. Some of these belts on these transverse engines are bitch to do without a lift . If you change it it will probably be good for the rest of the life of the car .