Suggest to check various websites, see what that have. EBay auto part, Rock Auto, & Dorman are where I’d start. The simplest solution may be to just buy 3 copies of the same stock replacement part, and replace them as they break. The problem of plastic parts in mechanisms on the inside of doors is not limited to Hyundai btw. I had to replace* a problematic door handle part on my Corolla, b/c the plastic part broke when I attempted to remove the handle to repair the lock mechanism. It may be the case that this particular part is more vulnerable to breakage on a Hyundai Tucson than the same part for a Honda or Toyota. In that case, maybe buy a Honda or Toyota next time.

GM trucks and SUVs, have that too.

Vehicle owners normally don’t buy 3 copies for the purpose of having spares, aftermarket window regulators range from $70 to $190 depending on features.

Lots of plastic in a Hyundai window regulator. 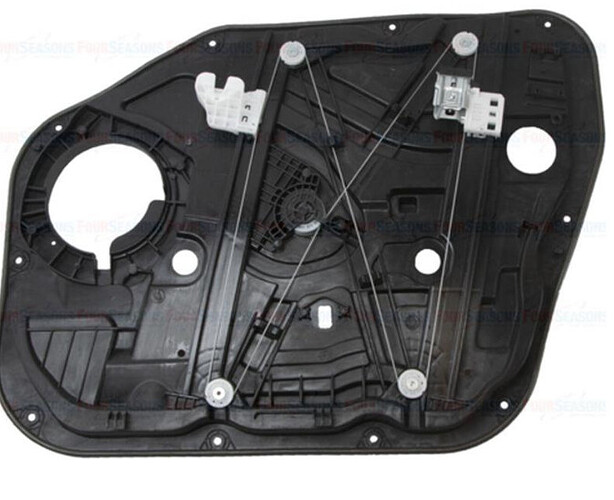 The simplest solution may be to just buy 3 copies of the same stock replacement part, and replace them as they break

GM trucks and SUVs, have that too.

Hasn’t that also been a problem with VWs over the years?
I seem to recall a bunch of complaints in this forum about VW window regulators.

Lots of plastic in a Hyundai window regulator.

Don’t know about my Corolla’s window regulator, it’s never failed, inside the door panel only had to fix door locking mechanism, which indeed had a broken plastic part (which I broke). My truck’s window regulator has a couple pieces, part of the sliding mechanism, that look like plastic; those parts have never broken in 50 years of use, very rugged. I expect they are made of Delrin, which is very tough stuff.

I don’t see how the Hyundai version works. I expect to be seeing a parallelogram arrangement of steel rods.

I don’t see how the Hyundai version works.

It looks like the pulley in the center (mostly hidden) moves the cable, which moves the two window mounts up and down.

I imagine the whole mechanism is purchased, not just the gear.

It looks like the pulley in the center (mostly hidden) moves the cable, which moves the two window mounts up and down.

Yes, the traditional parallelogram rod arrangement seems to have been replaced in this car’s design by an X-shaped cable & pulley system. The X method looks like it should work ok, but the rod method seems more robust. Not sure what part OP is replacing, the entire mechanism, or just one of the pulleys or gears? I’m guessing the part that fails is the mostly hidden pulley you mention above, not the entire mechanism. $80 for that part seems a little steep. But when I asked for a replacement windshield washer squirter for my Corolla, as I recall the Toyota dealership quoted $35 each. That made it an easy decision to let the dealership keep their squirter to sell to somebody else, and I just glue-up the broken original.

You can’t buy just the gear. you have to buy the complete assembly.

Ok, I see them listed as the entire ass’y at Rock Auto. $140 front-left, $150 front-right. I think if I had that problem and had more time than money I’d experiment to see if I could effect a diy’er repair on existing regulator. Sometimes it is possible to repair a small gear like that by removing it and touching the teeth up with a triangle-file. I do that routinely as part of replacing brake shoes, for the little gear in the auto-adjustment mechanism.

When a window regulator part breaks, the loose cable gets tangled in the spool damaging both. These regulators don’t get repaired, there are no gears to file.

Below is a window regulator for a 1996 Caravan with metal guide rails, this is an old design. 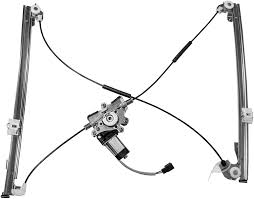