I have a 2015 Jeep Compass. Twice in the past week, it has gone “limp” while I’m driving – the accelerator doesn’t work when I press on it and the steering wheel is hard to turn. I pull off the road w/the little momentum the car has, turn the car off and then when I start it back up it’s fine. When this happens the anti-skid brake light on my dashboard comes on but the CHECK ENGINE light does not come on. I took it to a local Advanced Auto Parts to see if they could diagnose it but they said they couldn’t since the CHECK ENGINE light isn’t on, there are no error codes to detect. Someone told me to turn off the anti-skid brakes before I drive so I have been doing this and have had no problems. Any suggestions?

Does your Check Engine light come on momentarily when you turn on the key? You might go to your parts house and ask them to read OBDII codes on your car, but don’t tell them the light isn’t on.

As a total guess, I think one of your ABS sensors has failed. The computer thinks you are pressing brake and accelerator at the same time. I’m not familiar with that model. Does it have lane correction? It is usually a fairly quick fix.

The computer thinks you are pressing brake and accelerator at the same time.

I think mperry is on the right track with this thought…

You may actually be pressing the accelerator and the brake at the same time if you are a left-foot braker.

Or the brake light switch is out of adjustment causing the car to think both are applied.

Someone told me to turn off the anti-skid brakes before I drive so I have been doing this and have had no problems.

How are you accomplishing this??

I think Kathi is turning off the traction control but who knows what is going on here .

Hello and thanks for your suggestions. There is a switch on the dashboard (pic attached) that turns off anti-lock brakes. I was definitely not pressing accelerator and brake at the same time. 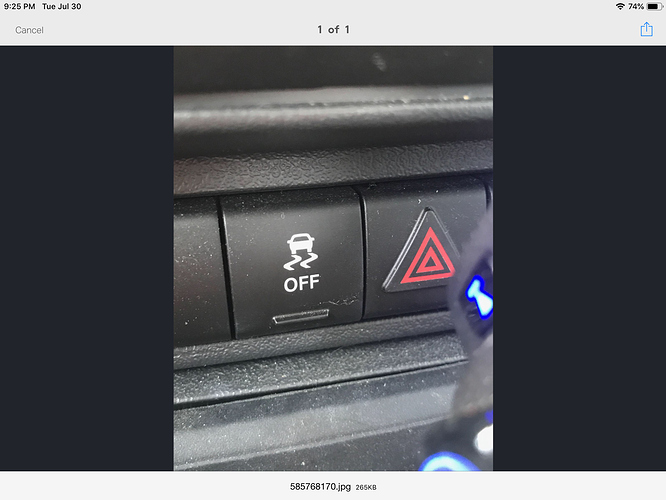 No my car doesn’t have lane correction.

That is traction control, not the antilock brakes. But if turning it off eliminates the problem, that is a big clue. There may be a code in the ABS system (traction control uses the ABS sensors).

Thanks, I wasn’t sure, but thought it might with the wheel turning.

You don’t have to actually be touching the brake pedal, if the I-net is correct. Searching Jeep Compass, some reported the sensor fails, so the computer thinks you are applying brakes/throttle and takes “corrective measures”… disabling the gas, applying brakes. (Isn’t technology wonderful?)

I assume the logic is to correct a run away condition, like Prius had a few years ago. The throttle sticks, jam on brakes, and the two systems fight. Jeep’s computer is apparently smarter. Engineers design assuming everything is functioning 100%.

Thank you for the suggestion and for correcting my terminology. I guess I’ll have to take it to the dealer for diagnosis.

I guess I’ll have to take it to the dealer for diagnosis.

Usually one might say you don’t need a dealer for a vehicle out of warranty. In this case I think a dealer might be the best place . They will be able to update or have access to service bulletins . Don’t forget to tell them that disabling the traction control seems to help.

Actually, NYBo, Kathi is correct. In some FCA cars you press the traction control once to turn off traction, hold the button several seconds (until the beep) and it turns off both. This is for off road driving.

It is rather annoying to Abarth owners; they can’t turn off ABS.

I appreciate the info!

I believe that applies only to Trailhawks. But I can’t find anything to verify or disconfirm.

It’s in the Jeep owner’s manual. It’s rather necessary for true Jeeps. The 8 second delay is a “are you sure?” feature. For harsh off road you don’t always want ABS or traction control fighting your decisions. Owner’s manuals are on moparusa. (I didn’t check her Jeep, but its the same function as my niece’s.)

FCA chose to not allow US Fiats to disable ABS. It would be nice for some tracks, if you are a top 10% driver… but even those drivers will switch TC on and off, depending on the corner and don’t have time to hold a button for 10 seconds.

In some FCA cars you press the traction control once to turn off traction, hold the button several seconds (until the beep) and it turns off both.