I got into a car accident late Nov 2021. Went through the other party’s insurance and car was taken into the shop and repaired earlier this year, small family run shop I found kind of out of the way that had good reviews for collision repair. One of the things the mechanic had replaced that had been affected by the accident was the radiator fan.

Fast forward to early June, my car shuts off one night while driving. I turn it back on and pull over to park somewhere, take the key out and the engine shuts off but the headlights stay on as well as what sounded like the radiator fan (this was never confirmed by the mechanic I went to for repairs so I’m just guessing by the sound here). I take it into the shop and the mechanic replaces the BCM and cable. BCM was burned all the way through.

Car worked fine for a week then did the same thing and turned off while driving, all the little maint lights and whatnot came on and when I turned it back on they all went away except for the brake light so I just turned it right back around and parked it at home. Took it into the shop that replaced my BCM.

They are still working on it, said if we can get the parts they won’t charge for labor which I thought was very generous. They have so far replaced the battery and radiator fan ( the same radiator fan that the previous guy put in a few months ago) and are having to replace the BCM again bc it was burned through AGAIN.

It’s been a headache and a half. In the beginning I just thought well maybe it’s because my car is getting old, but all of this happened after the accident. Was the initial repair not done correctly? Or could there have been a fault with the insurance company that listed the damage? The thing I find most strange is my car was fine for a couple months after the repair from the accident, albeit I didn’t drive it around much, but still. 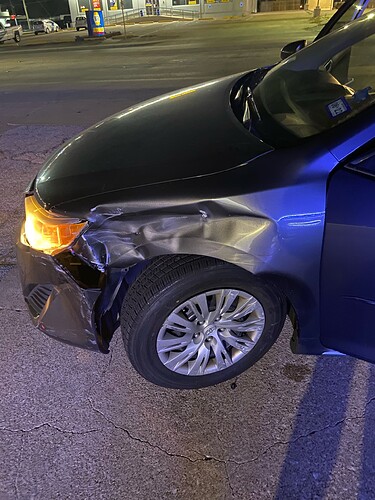 This was my car after the accident in November.

Since your BCM keeps burning up, it sounds like you’ve got some damaged wiring which hasn’t been properly repaired

Repeatedly replacing the BCM is the definition of insanity, imo

This is something your insurance needs to handle for you, as that’s their job

Definition of insanity indeed. I guess my concern is, will this still be considered an effect of the accident or has it been too long? And will my insurance even handle this problem?

Update on the car from this morning: the mechanic said it’s a problem with the cable or the wiring (which he had previously replaced when he first replaced the BCM) and that he doesn’t know exactly what and can’t fix it. So there’s that. Going to take it to a Toyota repair center, maybe I should have done that from the beginning.

I guess my concern is, will this still be considered an effect of the accident or has it been too long? And will my insurance even handle this problem?

Yes, it’s definitely an effect of the accident, imo

I wouldn’t worry about the time frame, as this problem didn’t occur . . . and reoccur . . . until after the accident and the repairs

the mechanic said it’s a problem with the cable or the wiring (which he had previously replaced when he first replaced the BCM) and that he doesn’t know exactly what and can’t fix it.

As I expected . . . and it also sounds like the mechanic seems to admit he won’t be able to figure out why this is happening. Well, at least he knows he’s in over his head and isn’t trying to hide that fact. Getting it out of that shop is the right move, imo

Thank you so much for all of your help and input. I’m going to aggressively pursue this with the insurance company and just go from there. I have reason to believe they will try to blow me off based on how they communicated with me initially in Nov (they didn’t get back to me for a whole month and just let my car sit damaged, albeit it was the holiday season but still) so I’m not exactly sure what to say or how to pursue this in a successful manner.

You probably need to hire a Camry electronics specialist to solve this. It’s not really the sort of problem that most body shops have the experience to diagnose. Once diagnosed, if you prefer your current body shop can effect the necessary repair. An experienced tech should be able to use the location of the burn-through on the BCM circuit board to provide a pretty good clue to what’s wrong. As speculated already, probably some component that connects to the BCM is shorting out due to the collision damage. Suggest to discontinue replacing BCM’s, fan’s etc until proper diagnosis is completed.

Might be best to drive another car in the meantime. A dealership shop might be required to source a tech with enough Camry electronics experience.

You’ve got lots of fuses and relays under the hood that someone needs to inspect. Body shops are great for replacing parts but not electrical issues.

What part of the BCM failed? You could share a close up picture. 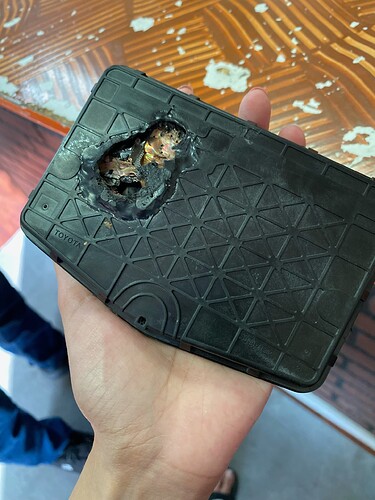 This is what they gave back to me the first time in June.

If you take apart the working one you can see what component was there then you can trace it to the wiring harness connector to find out what it controls. Whatever it controls is likely defective and drawing too much current.

A good mechanic armed with the factory wiring diagram, common sense and a decent multimeter should be able to figure this out in a reasonable amount of time, imo

Sometimes you can even see the damaged wiring

He could even install a fuse on that wire to protect the module form future damage. But fuses aren’t always fast acting enough to protect semiconductors.

That sounds like work that is worth more than the cost of a 2013 camry w 110k mi on it. IF the insurance co cooperates (no idea how I’m even going to go about that) then could they possibly write it off as a total loss?

It should only take a few hours to diagnose and repair the harness, imo

My Camry is older with more miles, and I intend to drive it for at least a few more years, as this is no time to buy any car

The shop presumably knows the area where the crash damage occured, so they only need to look there, not all harnesses along the entire car.

Not to be smart but reminds me that my foot hurts so wrapped my arm up twice but my foot still hurts. Focus focus.

After seeing the picture of the extensive damage to the BCM I would first make sure that the charging system is working okay. The DC voltage no more than 15 volts, along with no AC ripple voltage on the bus also. If the supply power side is good, then check for shorts or low load resistance on the output side of the BCM circuits.