I have been told by the dealer that my Jeep Patriot dropped a valve and went thru the piston. It had about 150000 miles on it but all were highway. Should I have expected this because in my experience I have never have or knew anyone else had this happen

Should I have expected this

You can’t expect this. It is rare but things break, especially on 150K Jeep products. Maybe the valve had a manufacturing defect that finally showed itself. Stuff happens, sorry it happened to you.

While it is not normal, it is a Jeep and an engine every 150K is not the end of the world.

I have had two friends that have had this happen and this was back in the 1960s. One car was a 1963 Ford 289 V8 and the other car was a 1966 Rambler with a 199 cubic inch 6. It is a rare occurrence. The owners of the. cars were conservative drivers. I guess things sometimes happen.
However, if the manufacturers of automobiles had left the valves in the block where the good lord intended for them to be, there would be no way an engine could swallow a valve. Long live the flathead. Like the south, the flathead will rise again!

I am surprised. The Patriot is usually reliable. The timing belt didn’t break, did it?

You are correct. With your driving, this car could have gone twice as far. (Other parts breaking, but usually the engine is strong.) That’s why I asked about the timing belt… but thinking back, this has a chain… so it didn’t fail? And were revving the engine high?

Or as Briggs and Stratton would say, “the L head”.

I also wonder about the reason for a dropped valve. It seems to me that an examination should reveal the reason why. Sudden metallurgical failures are very rare so one has to consider another cause. The OP needs to let us know about things such as a timing chain failure, severe overheating episode. a severe EGR problem, and so on.

No the flathead will not rise again!

Makes sweet sounds and looks cool in a vintage hot rod, though!

@Mustangman. I am headed outdoors to mow my lawn with my 1992 Homelight-Jacobsen with its Briggs and Stratton engine. The flathead engine still lives!

Not in my ( or your) lifetime. Infernal machines with poor breathing and volumetric efficiency.

The flathead lives, in this 32 Model B Ford… They just won’t rise again! 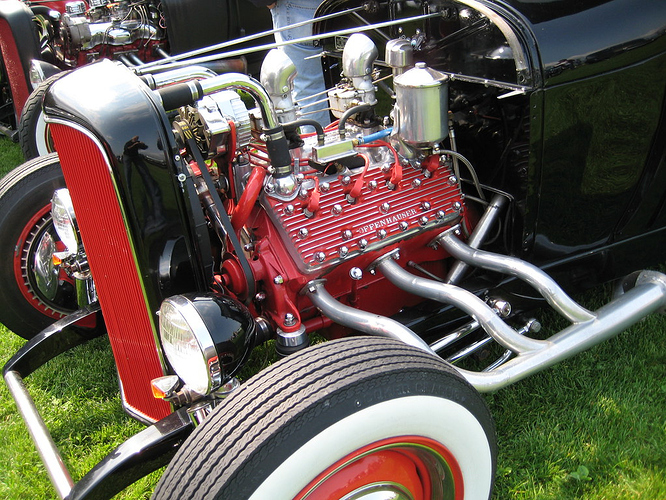 Notice the Offenhauser heads that were used to try and get that engine to breathe properly.

I keep hearing that about the south, but usually I hear it from drunk southerners. I can’t help but wonder what they’re waiting for.

When the good lord designed the human body, he put the valves in the heart, not in the head. Had the valves been put in the head and one came loose, dropped into your mouth and was swallowed, it would tear up the rest of your body.
Here endith my discussion of theology and technology.

I wish Triedaq’s valves had been put in his head. He might be more efficient in getting things done around the house. At least he would remember to log off his computer when he goes to do something else so I wouldn’t see his stupid posts.
If Triedaq’s valves were in his head, we could pull his head and grind his valves when he loses efficiency.
Mrs. Triedaq

@Triedaq I’m cracking up from that one. Do you remember Buick’s old slogan " valve in head, ahead in value"?

@old_mopar_guy. I remember Buick’s slogan well. I also remember Buick’s slogan “When better cars are built, Buick will build them”.
I don’t work on my own cars these days, so I really don’t want to go back to a flathead engine.
I did buy a 1948 Dodge to restore some years back. The flathead 6 in that Dodge was really easy to work on, and I had that engine running well. However, the body needed a lot of work. When I was offered more for the car than I paid for it, I grabbed the money and ran. I still have a lot of respect for the heavy handed engineering of those Chrysler products of that era.

Some years ago, I restored a '48 Dodge for my next door neighbor. It was a well engineered tank. The girder frame looked like it could hold up a building. I had a good bit of difficulty teaching my neighbor how to use the fluid drive + semi-automatic transmission.

Speaking of slogans, how about " when better Buicks are built, Lexus will build them".

Do you remember Buick’s old slogan " valve in head, ahead in value"?

Wasn’t that back in the 30’s? I was watching Leno’s Garage about the Buick Y Job, and he mentioned the “war” they had with another company. The comp had an ad with a mech, looking at the overhead valves, “Oh, just too many things to adjust.”

Actually Buick has always had overhead valves, from the first one in 1909. I think they used the slogan on and off through most of the 20th century. Chevrolet also used only OHV engines from the beginning of time.