Are CVT transmissions really all that bad?

When they were first introduced, CVTs were only found on smaller cars. The first full sized cars I remember having CVTs were the Ford 500 and its sister, the Mercury Montego. A lot of people stayed away from those cars due to perceived issues with their transmissions.

I recently saw a Montego with just over 200K on the clock. The owner said he bought it with just under 20K, and had never had any problems with the transmission.

My questions are these: Do CVT transmissions have any more (or less) failures than “normal” automatic transmissions? After all, they sometimes fail too. I understand that CVTs are very expensive to overhaul or replace.

What cars are now using CVTs?

When I was looking to buy a new SUV I test drove the new Pathfinder (which has a CVT transmission). Before I made my decision I went to a local trusted transmission specialist. He LOVES them…because he gets a lot of business repairing them. He sent two of his techs to school on how to service them shortly after they first came out because of all the failures he was seeing. At the time his only option was to replace. He wouldn’t buy a vehicle with one…but loves when his customers do.

They may be the future…but the technology is still changing and hasn’t been made robust enough for my needs.

All Nissan cars use the CVT, and Nissan provides a 10 year/100,000 mile warranty on the transmission. The Jatco CVT has been around for so long that I would not be terribly concerned about it.

They take a little getting used to. I drive a lot of different cars every week and I’ve noticed a distinct whine in CVT equipped vehicles especially in the Altima and Sentra models. These are brand new cars and I don’t like the whine at all. Some other driver’s hear it and some don’t.

The Jatco CVT has been around for so long that I would not be terribly concerned about it.

And Nissan has had problems with them. So I would be concerned. 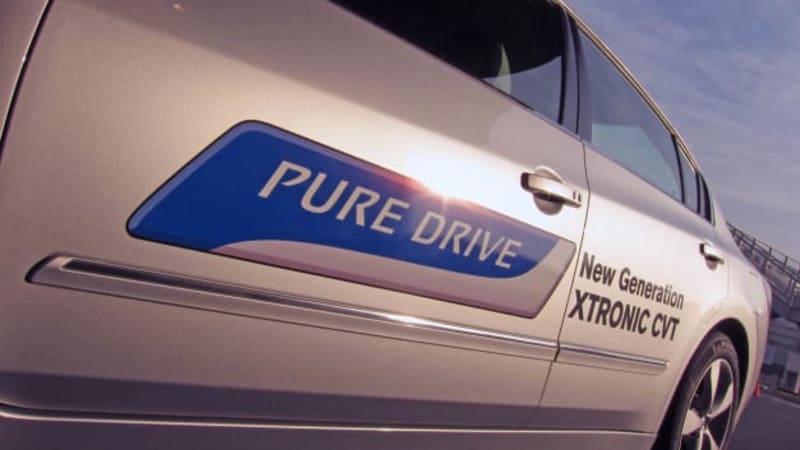 Nissan's decision to fit continuously variable transmissions across even more of its new models may be coming back to bite the Japanese automaker, as it's been hampered by customer satisfaction issues relating to its XTronic CVTs, which are provided...

The nissan one I would not touch with a ten foot pole until they get that proven it works okay. As recent as 2010 they have had major problems that allowed for extended warranty on them. Not sure if modifications helped. I have known folks with Murano’s to have one transmission replaced under warranrty that supposedly better only have that fail out of warranty dropping $5ish into another.

I believe the major issue is you don’t rebuild them yet, you replace the entire unit.

Honda(Accord/Civic), Subaru(nearly all), Nissan, a lot of Toyota have flipped over.

When I ordered my 2011 Outback, I specified the six-cylinder engine for a couple of reasons–in addition to the obviously superior power output. I also wanted the six because it utilized a timing chain rather then a belt, and because it used a conventional 5-speed automatic, rather than the CVT with which the 4-cylinder model was equipped.

I have never regretted my decision, but it is interesting to note that the reliability ratings in Consumer Reports show a higher “problem” rate for the conventional automatic, as compared to Subaru’s CVT.

I haven’t had any transmission problems (or any others, for that matter), but apparently there was a higher reported incidence of repairs with the conventional automatic trans. That may have been part of the decision-making process when Subaru decided to go “all CVT” with the 2015 Outback models. Even the choice of a manual trans on their US-made models is gone.

I’m sure that improved fuel economy was the major part of their “all CVT” decision, but I don’t think that they would have gone in that direction if they were experiencing high warranty-related claims on their CVTs.

Purely opinion, but I think the early ones, like any new tech, were pretty unreliable, and that many of the bugs have been chased out by now.

I will say that the feel of a CVT-equipped vehicle takes some getting used to, and if you like to have instant power, that the ones I’ve driven are pretty gutless off the line.

Purely opinion, but I think the early ones, like any new tech, were pretty unreliable, and that many of the bugs have been chased out by now.

And according to Nissan…that’s still not the case. Everytime Jatco introduces a new model…there’s problems.

Whether they’ll move past the infancy stage and into a more mature product depends largely on the evolution of hybrids and EVs. If 15 years from now much of the new car product is EVs and the rest highly evolved hybrids, CVTs may just be a moot point.

I’m not by nature an “early adopter”. I would not buy a CVT. I like a much more highly evolved system.

At least some of the failures of the early ones were due to improper service, shops or owners put regular ATF in them.

As far as function, I rented an Altima once and after a day or two got used to it. YOu just have to push harder on take off.

For me, when buying a car, I try and buy one with conventional transmission, but if someone gives me a deep discount on a CVT car, then I might consider it. It would be interesting to see the reliability of the new Accords/Corollas etc after switching to CVT.

Consumer reports has not had high failure levels reported on Nissan CVT transmissions in the last 3 years. It appears that their discussions with Jatco had positive results.

Browse up-to-the-minute automotive news and analysis, including expert reviews of the latest cars on the market, at Cars.com.

Even a Yugo could last 3 years. I hope the CVT is fine…but there isn’t enough data yet to convince me. I won’t buy a vehicle with a CVT unless it’s the only choice I have. Maybe when I’m ready to buy again in 5-6 years my opinion will change.

I wouldn’t buy a car with a cvt. I don’t trust them and I don’t like how they feel.

Gotta agree with Mike. I would shy away from them for now. Its just being done for the fuel economy not for improvements in design or reliability. A ten year 100,000 mile warranty would not be enough for me. It doesn’t take much anymore to put 100K on a car. Maybe 150K or 200K warranty but then who wants the hassle of having a car in the shop. Considering the GM dealer down the road offers a lifetime power train warranty, 100K on a newly designed CVT is too much of a risk.

I’ve rented several cars with CVTs, and they were OK to drive. The part that bothers me is that no one, not even Nissan’s service department, can repair these units. Any unit that acts up is REPLACED, and as long as it is under warranty, that’s OK, but the warranty runs out at some point.

Then you are stuck with an expensive replacement, since no one rebuilds these units either at this point.

When the day comes that there are transmission shops that rebuild CVTs, I’ll consider buying a car with one.

The part that bothers me is that no one, not even Nissan's service department, can repair these units.

They can be repaired. There’s a transmission shop I use that rebuilds CVT trannies. In fact they rebuild them for the local Nissan dealerships.

I think the concept is great…It’s just the cost of replacing them (which usually totals the car) is reason enough to avoid them…When rebuilt units sold at a reasonable price become available, then my objections are withdrawn…But buying a new unit from a dealer, no, I will try to avoid that…

Corollas and Accords have too much of their reputation invested in reliability to chance an unreliable transmission. Toyota is usually way behind technology wise. Heck, the Tacoma still uses 4 speed autos and base Corolla has for years. So, if the CVT is found in a Corolla, I would have no problem buying one. If a Sentra comes with one, I would. Sentras have never been a paragon of reliability; why should their transmission be any different, whether it a CVt, manual or auto.

The limitations of Cvt s seem to be indicated in the types of vehicles they are found. Small 4s at first, later some 6s and NO trucks…so, light vehicles with 4 cylinders. Should you buy an Accord cvt or a Chrysler 8 speed auto…which would scare me more.

I would bet that most of the motoring public has no idea what type of automatic transmission is in their vehicles. They don’t care whether the transmission is a 4 speed, 6 speed, 8 speed or CVT automatic.
I say this because I think back to the 1950s. We had the GM Hydramatic which had 4 forward speeds and a fluid coupling as opposed to a torque converter, the Chevrolet Powerglide which depended completely on the torque converter unless low was manually selected(until the 1953 models appeared which then always started in low), the Fordomatic and Mercomatic that started in second unless one put the selector in low, When, in 1957 the Plymouth offered both the Powerflyte 2 speed automatic and the Torqueflyte 3 speed automatic, it didn’t seem to make much difference to most buyers of the Plymouth. In 1959, Ford offered the 2 speed Fordomatic and the 3 speed Cruisomatic. Most motorists didn’t seem to understand the difference except that the Fordomatic cost less.