2007 b9 have overheating issues

Simple answer, get it fixed.
Fifteen year old vehicle. How often was the cooling system serviced?
By now you may very well have a clogged radiator.

By now you may very well have a clogged radiator.

Or a blown head gasket…'cause Subaru!

the radiator was replaced ><130k miles , before that there was a rad hose that burst thanks

Yep, in as much as the radiator was replaced, agree with head gasket.

are your radiator fans coming on?

yes the fans come on , any idea of what is involved to say repair head gasket (to clear up the radiator was replaced @ when the car had 130 K miles) thanks

This Subaru has the 3.0 liter 6-cylinder engine. Not enough information provided to believe the head gasket(s) are leaking.

If a technician had stated the head gasket was leaking without giving a thorough explanation, these people would reject that diagnosis.

If it is not the 2.5 L I might suggest to keep looking. If it has a head gasket leak it can be checked with a block check. How to test for a blown head gasket with a block tester - YouTube This is a video on how the test is completed. It does not seem like it would work but I have used it first hand, and it works very well. Very quick and accurate test, once you know that you have a leak the next task is located which cylinder head it is coming from

I don’t know about Subaru’s. But since we do not know how long it has been since you changed the radiator, it could have been just done for all we know. did you bleed the air out of the system? there can be an air pocket. did you change the thermostat? it could be stuck closed.

the radiator was done approximately (the car has not used for the last 6 mo at least ) 2 years ago at that time the thermostat was done rad cap one new rad hose , the car was used after the new rad etc. the problem was it would use antifreeze a liter every 200 miles for the first while then it kept getting worse ,Subaru mechanic said that the head gasket are gone . @ this point I would like to know which is the best way to fix , Get a used engine or have heads done . By the way I went and ran the unit the tail pipes exhaust is white which means water is present as i was told . thanks m.b.

White smoke is an indicator of a internal coolant leak. Have you taken a look at the video I showed you, it is a tool that a local mechanic should have. If you wanted to purchase yourself they are not that expensive. You could determine if you have a head gasket leak

No i have not looked at the video I am not that computer savy would you send it to me again thanks m.b.

To check for a blown head gasket, remove the radiator cap when the engine is cold.

Start the engine, and while the engine is idling, watch the coolant in the radiator.

If bubbles begin to form in the coolant, a head gasket is leaking. 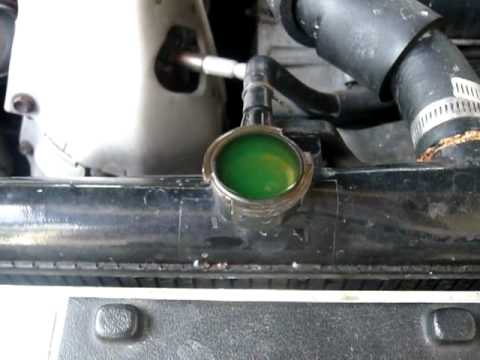 Have done that and that is what happens Bubbles thanks m.b.

But a 15 year old Subaru with a FIVE word original post, what ELSE would anyone diagnose?

Subaru mechanic said that the head gasket are gone . @ this point I would like to know which is the best way to fix , Get a used engine or have heads done

So, you knew it was the head gasket. Now think about it, get a used engine which may need the heads done or get the heads done one your current engine. Which makes more sense? The question is, how much more damage was done to the engine during the time you have been ignoring the problem?

that I have know idea how much damage has been done when it runs very good then a mis statrs not every time any idea $ wise do the heads verses a whole Japan engine ? thanks M.B.

$ wise do the heads verses a whole Japan engine ? thanks M.B.

You are just going to have to contact a local shop where ever you are. Shop rates vary by location and different shops . Also there may be a lot more needed besides the heads .