my shift lever will not move to the 1,2,3,4 position. can anyone explain why?

Auto trans? If so Push your brake pedal. If no brake lights turn on check and replace your brake switch.

Break lights come on. Also shifter will shift into rev, neutral, and drive but won’t shift into 1-2-3. When I start truck and put into drive it has full power and goes through up-shifting to drive , but if you come to a stop and then accelerate from stop. It is as if it did not return to first gear and is still in drive, slowly picking up speed until you reach Drive speed again. Any ideas? Maybe shift selonoid?

So you are saying that your shifter behaves normally except for the 1-2-3-4 portion of its throw? If I am not totally out to lunch that portion is the furthest away from P. It sounds like your shift lock is working properly, so what may have happened is that the shift cable casing may have come out of its mount. Or some other type of failure of the cable itself.

You need to get under your truck and look at the transmission and where the cable interfaces with the shift lever on the transmission. It should be easily visible once you are under the vehicle. You may see something obvious right then and there… Let us know what you see.

We can get deeper into detail after you report whats going on under your truck.

Sounds like multiple issues. First do what @Honda_Blackbird says then go from there.

Ill get under the truck now and see what happened. Try for pictures if possible.

This is what I’m seeing 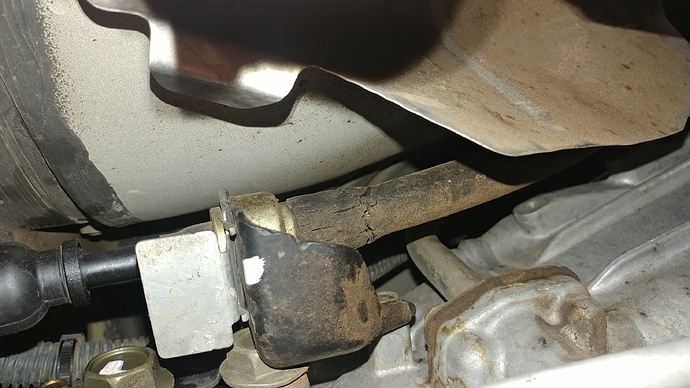 The tranny end of the shift cable. I disconnected it from
The tranny and could shift past drive with the shift lever

And could shift the tranny manuly past drive , (the truck NOT

Running ) at the time, but connected the cable and shift lever

Would only go as far as drive. There is a button on

The end of shift lever to shift manuly, could that have something to do with it?

Well…If you do not see anything awry under the vehicle and at the shift arm of the transmission… It may be time to investigate that convoluted shift gate you have at the console, there could be a piece of debris or broken plastic or who knows what, that may be fouling up the shift gate.

See what you find in the console now… Looking under the vehicle was the quickest and easiest thing to check, looks like you need to dig a bit deeper.

That the way it was made. Could it be tranny shift selonoid or speed selonoid?. Service eng lite on after disconnecting battery, codes that came up were (1)- p0430. (2)-U1000.

There is a button on

The end of shift lever to shift manuly, could that have something to do with it?

Ya think… look in your manual for heavens sake. If you don’t have a manual, get one you (and your fiend) obviously need one.
Those codes are not trans related.

There is a lot of information you could benefit from by going out and onto one of the Nissan Titan Forums called “Titantalk.com” It seems many guys out there have seen the same codes you are seeing and I read somewhere on that forum that the U1000 and subsequent trans codes could be a sign of a bad battery, a corroded ground wire located under the battery tray and it can also point to the F9 transmission connector having corrosion, water damage and or some kind of connectivity problem.

Might not hurt to look into those suggestions as a bad ground can affect many different seemingly unrelated items and if that F9 connector is making “iffy” connections it could help in figuring this problem out.

I think that Nissan Titan Forum could be a wealth of vehicle specific info for you at any rate. See what you can find out.