While driving my car around the city it rides smooth gears shift fine. If I get on the hwy and get off after maybe 15 mins, my car will jerk when changing gears. I was told from the previous owner (a trusted relative) that a line from the transmission had a leak and the repair was around $1500. I’m fine with that. I’m not sure if they were lied to but no one I’ve sent it to has seen a leak but it’s definitely jerking. I had a lose gas cap code that’s fixed now the car isn’t throwing any codes??? I’m confused this is a 233k mile car that I want to make my back up car It’s a great car and great looking still, so yes I’m willing to pay to fix tranny issues but any ideas even if it’s not the trans???

It’s possible the torque converter lockup is acting up. The result would be like shifting gears on a manual without using the clutch. I had a similar problem years ago with a Pontiac. A good independent transmission shop can tell you what’s wrong and fix it.

Are you keeping the fluid level up? Low fluid, erratic engine miss, or a faulty motor/trans mount could also do this.

I would have concerns about the age of the car along with the 233k miles combined with a leaking trans fluid line as having caused a problem that may be very expensive to fix.

Is the line leaking at the fitting or is it damaged/rusted on a straight run of pipe? If the latter why not cut the damaged spot off and splice it with a length of rubber trans fluid hose? That would be the cheap way out although i can see why a shop might be hesitant to do this.

Yes the fluid was actually too high, I let some out, drove it and let more out but I’m gonna have to do it again. Plan on changing the filter. The fluid and pan was fine. I wasn’t told it was leaking from the fitting only the line. I got under the car with my dad honestly bc I’m tired of being hustled at these shops, but neither one of us saw any “leaks”, some greasy spots but nothing that looked like transmission fluid. It’s raining here right now so I’m waiting on a hot day. 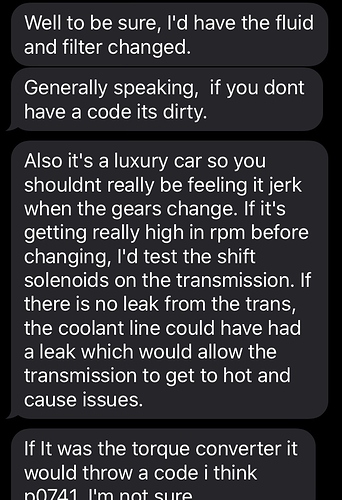 Just waiting on a good day to take it, it’s been rainy here all week. I just wanted to get other opinions just in case so I don’t spend more then what I need but I think I found a good shop. The trans for these cars now days aren’t THAT expensive but if I can avoid it that’s what I’m doing lol thanks for that !

Some inexpensive repairs are fine, but replacing the transmission is too expensive for a 16 year old car with 233,000 miles. At this mileage, another expensive repair could be just around the corner. Before you pay for an expensive repair, get the car checked thoroughly for anything that might need fixing.

I had it looked at by three ppl and they found absolutely nothing wrong, other then the issue at hand, I mean all services available were done to this car that’s the main reason I got it to be honest. It’s really a good vehicle for the year and miles

A transmission replacement could cost as much as the car is worth. Is that OK?

The trans for these cars now days aren’t THAT expensive but if I can avoid it that’s what I’m doing lol thanks for that !

Have you priced a rebuilt transmission or even a used one because none of them sound cheap to me .

Before you make a decision, have the car looked at and get an estimate. Then you’ll be in a better position. For reference, a used transmission will cost you $600 or more plus installation, a rebuilt considerably more.