My daughters car has been parked for about three months. Of coarse when she got in it the battery was dead. I put the charger on it and after about three hours of charging I got the car started. She drove the car about a half mile from our house and the battery light came on and the car started running rough. I put my meter on the battery while the car was running and it was reading 11.30 volts. I immediately thought that the alternator was bad and replaced it. The car would start and run very poorly. Pulled the battery and had it checked, it was bad and replaced. The alternator was now reading 12.15 volts at idle with the battery light still coming on. Called the parts store and they agreed that it may be the alternator and they would exchange it for another one. This time I had them test it before leaving the store and it passed. Changed it out again and I still have the same problem. New battery, new alternator x2, new belt, new tension pully, clean connections and I’m at my wits end over this thing. Any suggestions?

The power train control module regulates the voltage from the alternator. 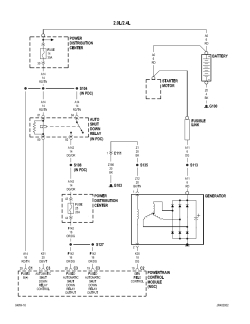 There’s a Gates Training video on YouTube called alternator decoupler pulley. Take a look at it.

This car does not have a decoupler pulley. So this does not apply in this case. Even if it did have one (which it doesn’t), it would have been new on the two different alternators that were installed.

Where is this located under the hood? Is it on the driver side fender well?

Location of ECM: Where Can I Find the ECM on a Chrysler Sebring ...

Where can I find the ECM on a Chrysler Sebring 2002 v6 3.0L? I have looked through many sites and an online Chilton manual, but the computer is not ...

There’s a fusible link between the alternator and starter, usually located at the starter.

The voltages I quoted were taken from the post on the alternator. 12.15 volts from the first “new” alternator and 12.19 from the second.