2004 Chevy Classic 250,000 miles on the clock.
-battery was replaced during early 2020 (the one it replaced was probably 4-6 years old)
-alternator/serpentine belt was replaced probably six months prior to that after breaking

During a drive home from work the charging light came on. Once home I opened the hood and did a quick visual inspection with it idling. The battery cables were tight with no visible signs of corrosion. The belt was still on and looked good. The alternator pulley was turning. Didn’t notice any noises I haven’t noticed before.
I went inside to get my multimeter and checked battery voltage at idle no load. 11.6-11.7 volts. I had someone rev up past 2000rpm and hold it, it didn’t go up at all although oddly enough the battery light went off. It was steady or if anything it dropped by 0.2 volts while revving. I checked for resistance between the alternator casing and a nearby ground and it read 0 ohms. Where do I go from here?

You go to the nearest parts store or online to Rock Auto and buy an alternator.

With car running, put the red output lead of your multimeter on the output terminal of the alternator and the black lead to ground. You should see 13.8 - 14.5 bolts. If you don’t, it’s time to replace your alternator. If you do, then there’s resistance in your cable to battery.

If you can spare the vehicle for a few days, see if a local auto electric shop can fix the alternator. Remove and reinstall it yourself. The result may well be more reliable than a rebuilt or a new aftermarket part from the parts store, and much less expensive than a new OEM part.

Check to make sure the fusible link between the alternator and the starter solenoid hasn’t blown. 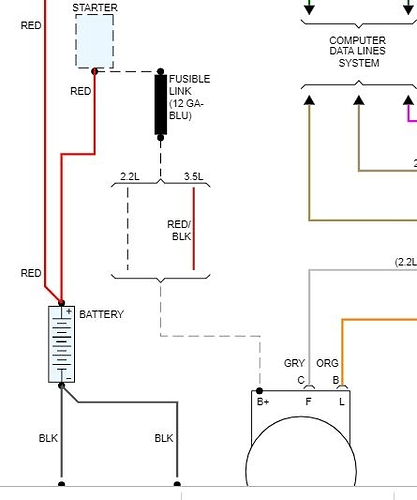 Alternator but sure check the link, but your battery is now seriously discharged and may have been damaged. My usual comment on the quality of alternators, rebuilt, even new. I had no luck until I just switched to Delco rebuild due to the number and quality of the parts included. My last one is a new Delco.

I did this test as suggested followed by a voltage drop test between the output terminal of the alternator and the battery positive. Does it invalidate the test if the battery was undercharged?

The voltage drop test between alt output and battery positive read a couple of milivolts. This signifies excellent connection unless I’m misunderstanding something?
The test with the output terminal and ground (I tried two different grounds) read the same as battery voltage with the engine running, load or no load, even after revving. Does this mean the alternator is pushing up daisies?

I just switched to Delco rebuild due to the number and quality of the parts included.

I only install remanufactured parts. 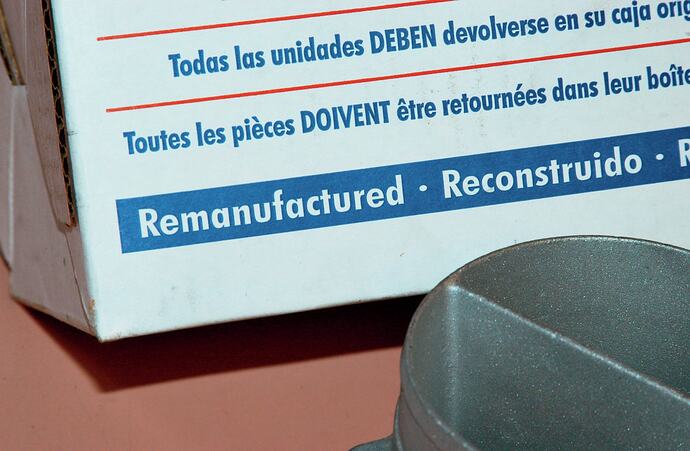 Q: Hello Vette technical department. My name is Charles and I have a question regarding my 1976 Corvette, which is a daily driver. My engine is tired and starti

Voltage drop .5 bolts or lower is good. All electrical tests should be done with a good and fully charged battery, but in this instance I would definitely replace the alternator and you should be good to go.

I’ll try this test next. Thanks

If so, then there is likely a break in the alternator to battery cable; as in fusible link.

I got next to zero voltage drop between battery positive and B+, this should rule out fusible link right?

or there is likely a fault in the dashboard battery light or wiring. Burned out bulb will do it.

The warning light seems to work just fine (visually), it even goes off if I rev up the engine even though that doesn’t actually make the alternator do anything.

EDIT: Tried the magnetic test, there is no magnetic attraction at all.

but in this instance I would definitely replace the alternator and you should be good to go.

Thanks for the suggestion, probably going to end up doing that. There’s a 2 wire connector also attached to the alternator, just to be certain is there anything I could test on that or does it matter?

This is my standard battery/charging system test. Before first start of the day (engine not run 8 hours or more) the battery should measure about 12.6 volts; then immediately after starting the engine, 13.5 - 15.5 volts. You might want to do that test in the AM, report the results here.

Absent that, while there are other possibilities, the most likely explanation is faulty alternator or voltage regulator. On a 2004 I expect the VR is part of the alternator ass’y. The ideas above to replace the alternator on a flyer make a lot of sense.

Ray and Tom had a recent puzzler involving a similar symptom. The answer was that the car’s alternator had been replaced, and the replacement alternator came w/ the wrong size pulley.
If the pulley is too large it won’t rotate quickly enough to fully charge the battery. This possibility seems unlikely in your case considering the timing of the parts replacements and the symptoms, but keep the pulley size in mind as a backup if nothing else works.

The alternator is a non-permanent magnet unit which means the fields have to be energized to turn the alternator into a magnet so it can produce electricity.
It is magnetized by the power going through the dash battery lamp and what should be the F terminal on the alternator plug. That is the short form.
If there is power at that terminal and the alternator is not magnetized then offhand it sounds like the alt. has failed. If that is the original then it has had a good long life.

For the most part, motorcycle alternators are permanent magnet types. So one can take an air wrench and spin one of these into producing power with no battery in the circuit, BUT if continued the alternator will fry itself.

Sure, you can test the heck out of it with various methods. There are many websites you can use to find various methods. But with a high as probability that this alternator is bad you’d probably be wasting your time. If your uncertain, make sure your battery is good and fully charged and follow @George_San_Jose1 advice. If you want to take the time to delve deeper, remember it is never necessary to run the engine while the battery is unhooked, and definitely not worth the risk.

I’ll again suggest a local auto electric shop. They can test the alternator. If it’s working OK, that’s good information. If not, they can probably fix it.

I found 25 volts AC when measuring at the battery. I’ll go ahead and call alternator as been suggested here plenty of times. Thanks for all the helpful advice guys. The only matter now is figuring out new, reman or rebuild. This seems to be the cheapest and quickest option (at least in getting one)
Valucraft Alternator 2305-15-4 (autozone.com)

found 25 volts AC when measuring at the battery.

That’s a very unusual finding. Under what conditions did you make this test?
Suggest to increase your odds on getting a good replacement alternator by purchasing it from a dealership, or if from a parts store, a new or rebuilt alternator with the same brand name as came w/the vehicle originally, or what the dealership supplies now.

The only matter now is figuring out new, reman or rebuild.

Q: Hello Vette technical department. My name is Charles and I have a question regarding my 1976 Corvette, which is a daily driver. My engine is tired and starti

Do whatever you want but I would not be buying an alternator from AZ. You can get a brand new one from Rock in a couple days and a GM, or reman if you wish.