I am not getting any charge from the alternator at the battery. Normally I can figure these things out, but not this time.

Here’s what I’ve tried so far:

Try cleaning the ground connection on the chassis.

Measure the field control voltages at the alternator, this will indicate why it is not charging.

That is my next suspect. I’m a novice, so where do I find that, the ground?

Before the charge ended altogether, I had been getting periodic voltage cutbacks . . . wipers slowing down, headlights dimming, power windows running slow.

The end or ends of the black cable that goes from the battery.

So it later stopped charging? Intermittent charging could be the brushes going bad. Probably need a new alternator.

The ECU is what controls the voltage regulator output from the alternator. 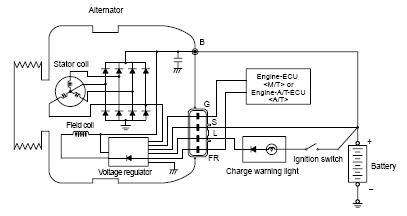 Are you getting that 14 volts at the alternator or the battery cable end?

The red dash warning light is operative isn’t it?

As Tester posts above, on many newer vehicles – presumably yours included – the alternator charging scheme is figured out by the engine computer. In days of yore the alternator figured it out by itself. But with newer cars and all the electrical gizmos they have, it requires computer-think. For example if you are waiting for a stop light and the radiator fans are on and the AC is on, even tho the battery may need some charging the computer won’t allow the alternator to kick on, b/c the extra load on the engine would cause the engine to stall. Instead the computer will wait until you have started back up and driving down the road, then the radiator fans turn off, then it will allow the alternator charging to kick on and charge the battery. So if the above voltage measurements don’t show any problem, something may be wrong with all that too. For example the computer gadget that senses whether the AC is on or not thinks it is always on, even when it isn’t.

if you are waiting for a stop light and the radiator fans are on and the AC is on, even tho the battery may need some charging the computer won’t allow the alternator to kick on, b/c the extra load on the engine would cause the engine to stall.

This cars computer will not stop the charging system at traffic lights, the field will be interrupted if the engine speed drops below 400 RPMs but that means there is a drivability problem. The benefit of computer controlled charging systems is to adjust the charging rate according to battery temperature for battery life.

This is an old car, newer vehicles employ greater control of the charging system to save fuel but this does not apply here.

hmm … well, another idea, the computer may be thinking the rpms are below 400 then, so it won’t allow the alternator to charge. OP, does your vehicle have an rpm gauge on the dash?

First of all, thanks . . . I appreciate the help. I’ve had this posted on a Mitsubishi Eclipse forum for two weeks, with no reply.

The voltage at the battery was low to begin with, because I have not charged it for awhile . . . 12.3.

When I started the engine, the voltage at the battery terminals dropped to 11.5.

The voltage at the B connector and the Alt case is the same, 11.5.

The voltage between the B connector and the + terminal on the battery is ZERO.

Belt is snug and alternator is spinning.

The battery dash light was not on when I started the engine, but after about five minutes, it came on, then off, then on, then off. I shut the engine off and put the charger on.

The longer explanation is that it has been in the process of failing for a couple of months. Then, two weeks ago, it failed to start when I was leaving Wal Mart.

I got a jump, got it home, and charged the battery.

I took the alternator to O’Reilly, and it tested OK. I put it back on, started the engine, and the voltage at the battery was 14.4. Success, right?

The negative battery terminal connector was crappy, and didn’t fit snugly, which has been a problem in the past, so I put a new connector on.

The alternator has not been charging since.

I have not checked the ground yet.

I wonder if you have a bad battery. After charging it, it should not drop it’s charge this quickly, unless you have a short in the system. I would remove both cables from the battery, charge it fully and let it sit overnight and test the voltage again. If it drops, its a bad battery. Then do the same fully connected too the car and see if the voltage drops. If it does you may have a short somewhere.

Item 5 of my OP, I had the battery tested and it is OK.

It is a Wal Mart battery, and they tested it. From what I understand, they charge it and then load-test it. It took a couple of hours.

But, I can do what you suggest.

I still suspect a bad ground.

Battery is on the charger now. 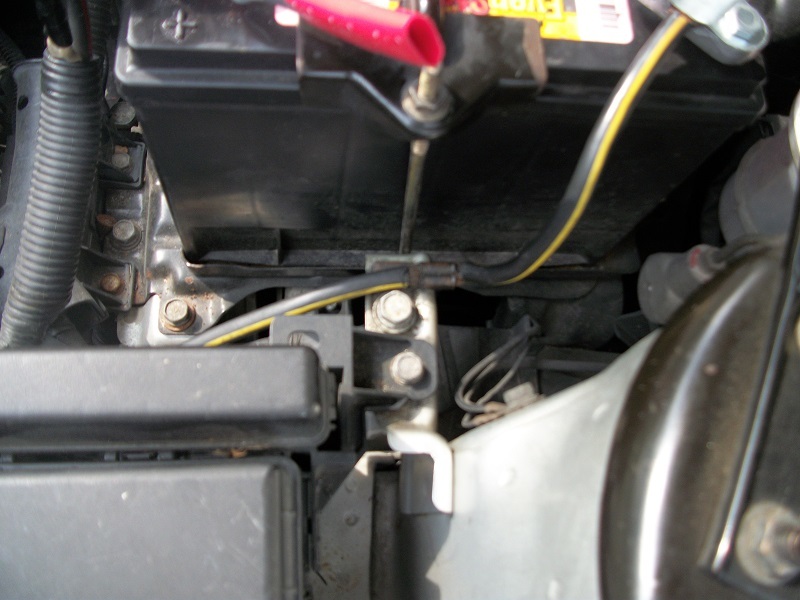 Is this the battery ground?

The voltage between the B connector and the + terminal on the battery is ZERO.

This would be normal because you did not include a ground. This test actually has no purpose, so omit it from your diagnostics.

When I started the engine, the voltage at the battery terminals dropped to 11.5.

The voltage at the B connector and the Alt case is the same, 11.5.

Maybe I missed it, but if you have not checked the belt tensioner…that is where I would start.

A fully functioning alternator should put out 14 volts.

This would be normal because you did not include a ground. This test actually has no purpose, so omit it from your diagnostics.

Checking voltage across wires/terminals is valuable information. It can indicate if there are bad connections. For example, if I place my meter probes on the battery positive post and respective connector body, they should read zero volts indicating a good connection. If there is corrosion, there will be resistance and in that case you might read some voltage drop across that connection indicating it is bad. In this case, the zero volt reading indicates the connections between the points are likely to be good.

Yes, that yellow and black wire is your ground wire. You have to find the other end where it goes to the body and clean and tighten it. The new end is fine for now but a new cable is a more permanent fix.

We don’t have O’Reileys ere but our Advanced and Autozone will check out your charging system on the car and I think you should get that done. I loved the Mopar alternators from the 60s. New brushes cost 25 cents and could be changed on the car with a Phillips screwdriver.

So where that black and yellow wire is bare wire, and fastened to that clip is not the ground?

I don’t see a clip. I just see the ground wire disappear behind some other part of your car. That end should be tightly fastened to the body of the car. You can also measure the voltage by touching the positive (+) terminal of your battery and the other lead to any exposed metal part of the car.