I have a really strange problem, and now after reading some things about the oil light, kinda afraid to drive my car, lol.

Here’s a bit of background on the car itself:

It’s a 2003 corolla, 180k miles, and was sitting an entire year on the Edgewater New Jersey waterfront, through Hurricane Irene. No evidence of flood or any major mechanical issue.

About a month ago, I replaced my battery, and did an oil change.

After the oil change, I started getting a few random symptoms:

With a bit of research on the error code, people have said to replace the VVT-i actuator. Do you think this solenoid has a large potential as the source of the issue? I purchased one for around $100 from Autozone, but am having a tough time removing it from the engine.

If you think this is the issue, how can I remove the solenoid? Do I just unbolt the one bolt I see on there and yank? Or is there something else I’m missing?

If its not the issue (others say potentially an oil pump) - should I head to the mechanic, or is this something I can check on the weekend myself? If its something I should check, what tools would you suggest I buy?

Thank you very much for the response!

The two symptoms you mentioned bother me. The loud ticking sound and the oil light intermittently going on and off are signs of a severely low oil pressure. The VTT-i system is operated by oil pressure, so low oil pressure will affect it big time, even cause the DTC code to pop up. First thing to do is get a calibrated oil pressure gauge and check the actual oil pressure on a hot engine. If it runs less than 10 PSI at idle, you have a very bad oil pressure problem. An engine tear-down may be required to fix that.

I do not think the solenoid is likely. Actually, Toyota calls it an “actuator” Nor do I thing the oil pump is bad.

Your problems are clearly all due to low oil pressure. The ticking is due to sticky valvetrain components and the oil pressure is probably due to hardened sludge internal to the engine and due to its year-long rest. It’s also possible that the oil returns are clogged and the iol is staying in the “top end” and not getting back to the pan sufficiently to feed the pump. Or, if this car is new to you, the engine may be worn out and you were unaware of it.

It’s also possible that the bearings dried out whil it was sitting and scored themselves and possibly the crank surfaces, then creating too low a flow resistance to allow the pump to get the oil back up to pressure. An oil pressure check is critical as a first step.

This car has the same engine as my 2006 Matrix.
Unfortunately, there’s a baffle that prevents looking inside through the oil fill hole.
So I would take off the valve cover and see how clean the valvetrain looks.

This is what Wikipedia says about Toyota VVT-i: “VVT-i, introduced in 1996, varies the timing of the intake valves by adjusting the relationship between the camshaft drive (belt, scissor-gear or chain) and intake camshaft. Engine oil pressure is applied to an actuator to adjust the camshaft position. Adjustments in the overlap time between the exhaust valve closing and intake valve opening result in improved engine efficiency.”

The first thing I’d do if this were my car, straight away, is immediately repeat the change of the oil and replacement of the oil filter. It’s possible whoever did it the last time made some kind of mistake, maybe used the wrong kind of oil, or used a faulty oil filter. I’d avoid driving the car until this is done. Afterward, have a mechanic do an independent measure of the oil pressure with their own guage, not the one on the car, and do a compression test of all 4 cylinders. And a leak-down test if that is indicated.

If it is still no go, the next thing I’d do is ask a shop to do a thorough engine interior cleaning. It’s possible one or more of the oil passages are clogged. Most shops have a machine that does this, called an “Engine-Vac” or something like that, made by Sun I think. Make sure your shop has one or something similar. Folks here have reported prior of their Toyotas being prone to oil sludge problems, so it is worth a try at least.

When something like this happens right after an oil change, change the oil filter again right away, you may have gotten a bad one.

Thank you all for your responses, much appreciated, and a lot of awesome intelligence in there. I’m glad I get to return that piece!

How exactly could I check the oil pressure? I did some searching, and I couldn’t find a video.

Circuitsmith, what would I do if I find that it’s clean, or if it’s fairly dirty? What would be the next step? How would you clean the interior of the engine?

GeorgeSanJose, how much would all that cost, do you think?

And, is there a way to do the tests or engine cleaning, by myself? I’ve revived it up to now, spending almost $1000 on it, and it’s not worth more than $3500. I want to keep the costs as low as possible

U spent 1000 on oil change, battery, vvt part? U think it was parked in a “dry” area during hurricane?r ur carpets wet?

Most of that $1k was in replacement of two relays. A local mechanic got me with 2 hours labor to find the electrical short and claimed EFI and horn relays came out to roughly $450 total.

$1000 for oil change and battery would be up there, haha.

As for the wetness, I don’t smell mold, and my carpets weren’t wet at all. The area was definitely dry during Irene - it was in a good area for Sandy.

Did you use a Toyota filter? I may be wrong but I think that era Toyota filter has a backflow preventer, Is it at idle, or while driving?

@ilharnx, I don’t know how much that would cost. You’d have to get some bids. You wouldn’t set out to do everything, it might be all that is needed is an oil and filter change. That might fix the problem just doing that. Home “shade tree” mechanics usually have the tools and knowhow to do a compression test. That’s a common project for do-it-yourself mechanics, or at least used to be.

Leakdown tests, oil pressure tests, and the engine-vac, those are usually left to the pros.

ilharnx said, 'How exactly could I check the oil pressure? I did some searching, and I couldn't find a video.'

It’s simple. Remove the existing oil pressure sender (basically it is an on/off switch controlled by pressure), and replace it with a calibrated oil pressure gauge. Run the engine to operating temperature, and read the gauge. A lot of parts stores rent tools like the one below. 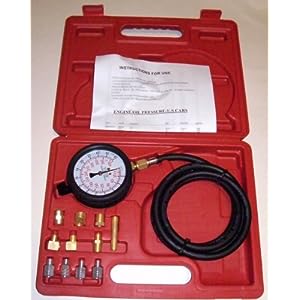 did you just buy this car? why did it sit for 1 yr and than you get it and replace a bunch of parts? if have owned it for quite awhile and just happened to store it for 1 yr than thats cool. people do whatever they want. my point is, if you have owned it for a long time, than you have history. you know how it runs and so on.

Did you change the filter yet? $3 plus a quart of oil. Why jump to the expensive fix first and not try the cheap and obvious one?