Determined there was power going out of the EFI relay, at the connector block, but does not seem to get to the “circuit opening” relay (behind glove box). I used a mechanics stethescope on the relay and cannot hear it click when turning on the ignition. Also used a meter at the connector to see if 12 volts was getting there. None gets there. I put on a new fuel pump aswell as a fuel pump relay but no dice. I can manually hotwire the fuel pump to run on its own, so I know for sure the fuel pump is working
Camshaft sensor connector is not getting any voltage when the ignition is on

Where should I look next? All fuses look good. I am stumped ;(

The last job I did on the car was the timing belt and water pump.

Sounds like an open circuit. Check the harnesses for continuity.

Did you ring out the harness between the two? Is there continuity between the leads in the circuit open relay?

Keep in mind that in many cars, except for a few seconds after the key is turned to Run, the fuel pump won’t run if the oil pressure sender is not indicating the presence of oil pressure. Study the circuit diagram to see if this is the case here.

The problem may be that the driver in the ECU has failed where it no longer provides power to the fuel pump circuit.

When the the ignition is turned to the run position, the ECU supplies power to the fuel pump circuit for a second or two to prime the fuel system.

Then when the ignition is turned to start, the ECU looks for the crankshaft position sensor signal to determine if should supply power to the fuel pump circuit.

If the driver in the ECU has failed, neither of these are going to occur.

A quick test to determine if the driver in the ECU has failed is, remove the fuel pump relay from its socket, and insert a jumper wire on the secondary side of the relay socket.

If the fuel pump runs and the engine starts, the ECU is the problem.

Here is some info that may help you out. The trouble you are having may be due to a problem somewhere else. There are two coils in the Circuit Opening Relay. I assume they both have to be ON in order to activate the relay. There is a NE signal that goes to the ECU in order to turn on the second coil of the relay. The second link describes the NE signal. 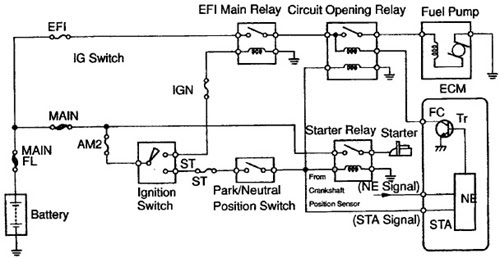 Though there are different types of ignition systems, the use of the NE and G signals is consistent. The NE signal indicates crankshaft position and engine

To prove the power wiring to the pump is okay you could place jumpers in the pins of the relay sockets that normally tie to the relay contacts. If the pump turns on that way then you know at least the power wires to the pump are okay and there isn’t a bad connection in that part of the wiring causing the issue. I assume the STA signal lead is okay since the starter works. If you apply 12 volts to the FC lead of the ECU and that makes the COR relay operate then you know that the issue is either with the NE input signal or the ECU output to the FC pin.