My 2000 escalade does not start sometimes. It used to happen 2-3 times a month now its 2-3 times a week. So far if I just wait 10-30 minutes after a failed start it will start up. I got a brand new battery a few months ago. Also here is a video of the dash and sound on a failed start. The second attempt in the video I stopped the key right before the actual start point and let it sit for a few seconds because one time I did that and it started. No luck this time though. If you need more info let me know. I realize you probably cant tell me exactly whats wrong but I was hoping to get some ideas so I can estimate repair costs. Also its gonna be a pain to diagnose because it only happens every now and then so I kinda wanna know what I should tell the mechanic and not sound like an idiot :-). Thanks

Are the 2 clamps on the battery terminals nice and tight? Voltage should be around 13.6V with a good battery.

Are the 2 clamps on the battery terminals nice and tight?

I agree with that

Voltage should be around 13.6V with a good battery.

I think so, ill double check but if the car was not getting enough power from the battery wouldnt the engine not fire at all? It definately vrooms for a second then dies.

Looks/sounds like it turns over, fires up briefly, then quits.

Could be a lack of fuel pressure and/or volume. Try turning the key from Off to Run - not all the way to Start. The fuel pump should run a couple seconds - listen for it. Turn the key back to Off, then Run and wait a couple seconds. Do this a couple more times, then turn the key to Start. Does it now start and run?

Your vehicle has the GM side mount battery cables.

Remove both battery cables, and on the positive cable, peel back the red rubber cover to expose the terminals.

If there’s corrosion at these terminals, the starter may function, but as soon as the ignition switch is allowed to go the run position, a voltage drop may prevent the engine from running.

Here’s an example of GM side mount battery cable with corrosion. 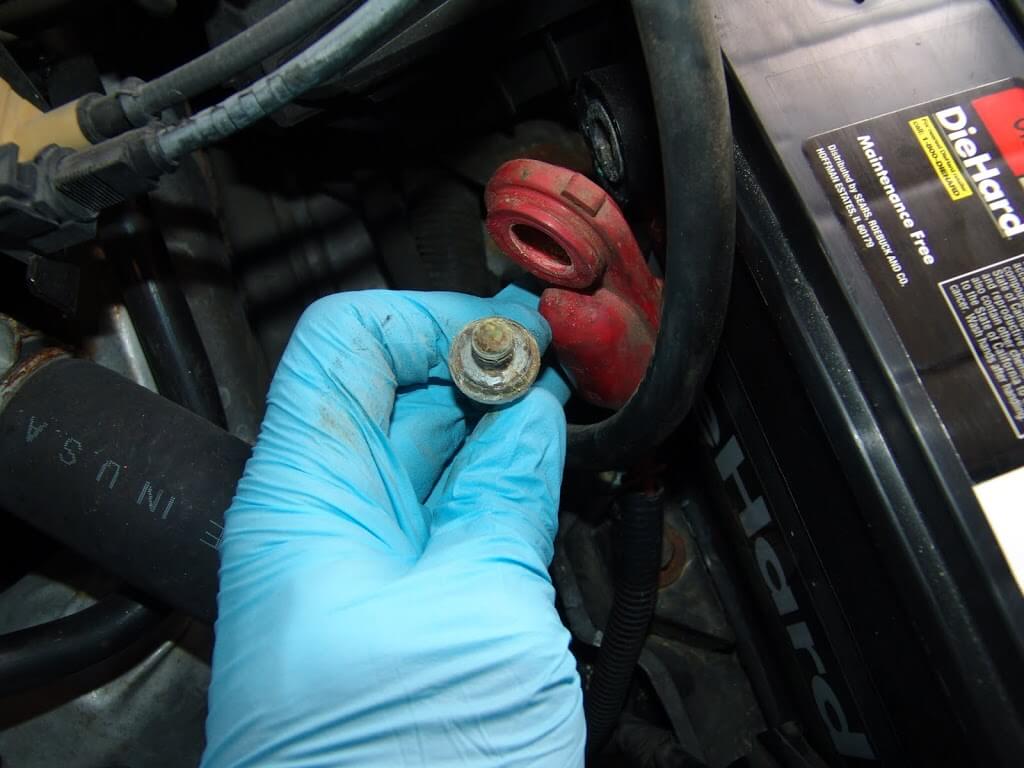 Before disconnecting the battery, find out if your radio needs a code entered before it will work again, and what its code is. I always write my radios’ codes in the back page of the owners manual and in the file folder I keep on each vehicle,

I use a 12V memory saver at work . . . there have been occasions when we didn’t know the radio code, but it wasn’t an issue, because of the memory saver

But I hear where you’re coming from. And I expect most diy guys wouldn’t spend $50 or so on a memory saver, which they probably won’t use often enough to justify the expense

Go to a parts store and spend $15.00 on this tool, Connect a 9 volt battery, plug it into a power port/cigarette lighter that has constant power, and it’ll save the memory for up to an hour.

Just don’t open a door while it’s plugged in. The dome light will kill the 9 volt battery, and you’ll lose the memory.

The 9 volt battery memory savers that plug into a powerpoint are going for $15 TO $20, As are the ones that go between the odb and a powerpoint plug, I do not understand what they think you will plug it into, but I made a reciever for the plug hooked up to an unused 12 volt ac power supply from some long dead computer or printer for longer jobs I did not want to depend on a 9 volt battery, just watch the polarity, and make sure your powerpint is active while the ignition is off, otherwise it is useless!

The better ones let you choose . . . either hook up to the dlc, cigarette lighter socket, or 12V powerpoint

Of course, it’s up to YOU to check if any of those will be hot with the ignition off, as you said

I used baking soda and water to nutralize the small amount of corosion, then steel wool and a bit of water to make the copper shiny again. Hope that was ok.

Started up well, maybe a little more powerfully than before so fingers crossed. Thanks again for the help! Oh yeah luckily the radio is working fine. Did not know about the code heh

Good for you. If the cranks but won’t start problem reoccurs, I’m guessing it’s a fuel pressure problem. Could be an ignition problem too. If you can get it to fail while the car is at a shop, they could determine if it was the ignition system or not in short order by doing a spark test.

I thought of that too.
If it always starts on the second try, you could be losing fuel line pressure while the vehicle sits. Try putting the key in ON a few times for, say, 4 seconds each, before turning it to START. If that cures the problem, that’s a good indication that you’re losing fuel pressure when the car is OFF. Since the car is malfunctioning three or four times a week, you should know in the first week if this guess is right.

If it IS right, you could if you choose just build the initial steps into your daily startup procedure. I did that with an old truck I had that was losing the gas in the float bowl overnight. It worked reliably for the truck’s final years of life.

The start and stall condition with the security light flashing suggests that this is an ignition immobilizer problem.

Perform a search for “GM Passlock” and you will find information on how to bypass the system.

Nevada beat me to it. Forget the battery/cable testing, it’s obviously a security system problem, as you can see by the flashing security light on the dash. The car starts and dies because the computer is turning off the fuel injection. It thinks someone is trying to steal it.

Hmm although the car started the security light was solid orange during the ignition and then went away when the car started idling. Before it didnt start and flashed red. Right now im trying to figure out the best way to bypass the passlock. So far I have seen cutting wires. Putting a shim in the connector at the ignition key to keep it from wiggling. Installing a resistor in between the wires and buying a 30 dollar bypass kit. Not really sure which to do so any advice would be appreciated! Thanks again

cleaned the terminals as well as a could

Yeah thats what I did, sorry. Next time ill prolly use sandpaper or attach tool to my drill. Then I wouldnt have to dry it