About a little under a month ago, when my dad tried starting the car, it would start up, make a weird rattling sound like “kakakaka” and then when you press the gas pedal, the car will shut down.

When we do get the car to work, and it starts riding for around 30 miles, the car seems to struggle to maintain speed and get faster even when the pedal is pressed further.

An engine light was shown for either P170, P171 or P0171 (reading off a paper and cant tell what the number is.) We took it to two technicians and neither could find what the problem is.

The light will occasionally turn off and when if you drive for like 20 miles itll come back on.

The first mechanic we took it to they removed and replaced the air/fuel ratio sensor. As well as put in a “Bosch Oxygen Sensor”. Got charged 300 for this, and the lights still came on, problems were still there.

Went to another mechanic and he straight up couldnt find anything wrong so he didnt try replacing anything.

A family friend recommended a new battery, so we purchased a new one and put it in, but problems were still there.

Now today, after the car being inactive for around 10 hours, it completely failed to start. When you put the key in, it doesnt even make the usual sounds. We tried jump starting it with cables which did work, but then when we got home, turned off the car, it wouldnt turn back on. The doors wont lock (if that matters), the little light inside the car still shines though (if that matters)

Is this something I can solve, or should I take to another mechanic? If so, is it possible to bring it directly to a Toyota dealership or something? Because for the second mechanic he said he couldnt find anything because the parts were so old…uhh 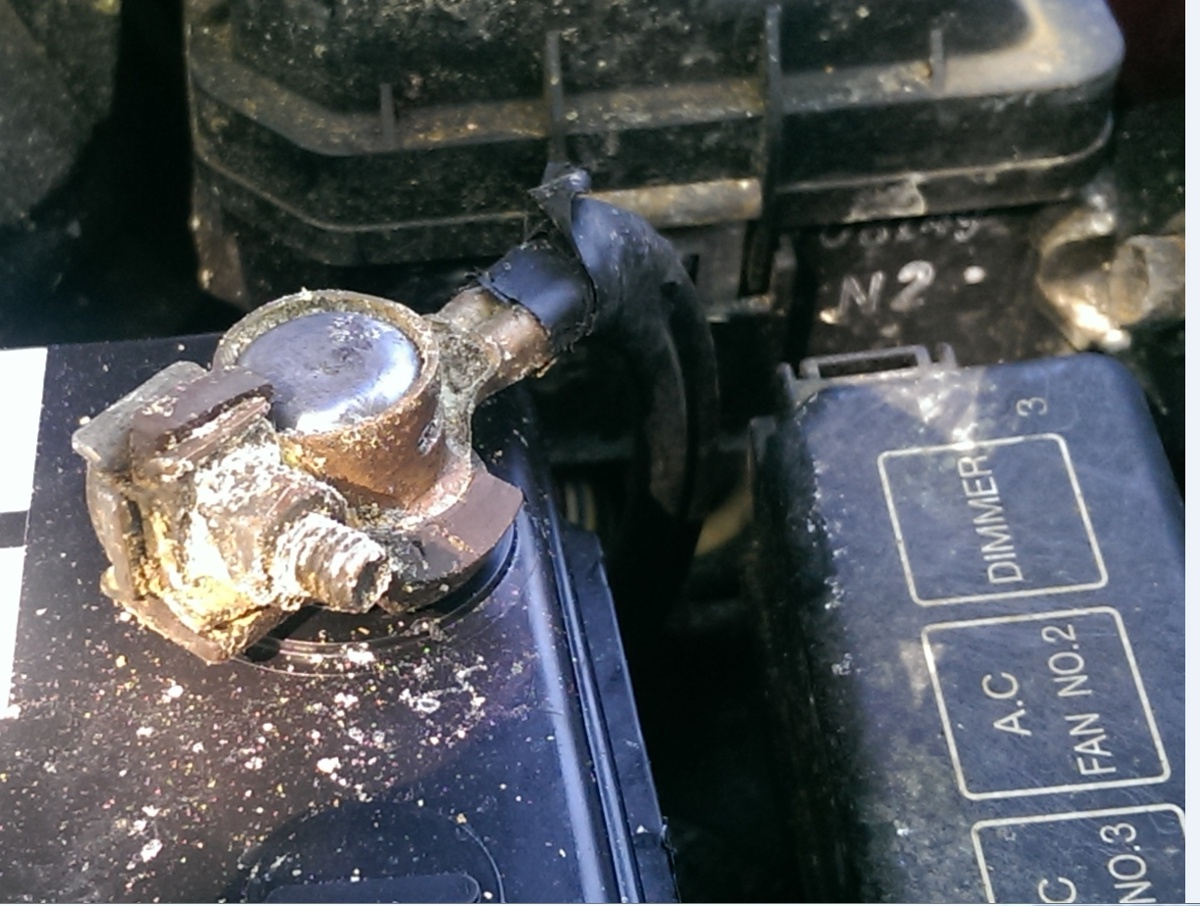 Today I took out the battery and cleaned off all the corrosion on it and put the battery back in. I tried to start up the car and it did work! I then turned the car off, and then put all the tools back inside, and when I went back out to try it again, it does not start up. However, when I put the key in, it made the usual (ding ding ding) noise, and it showed the seatbelt light. when I tried to start the car, it showed the Check Engine light, Low engine oil pressure light, as well as Charging system warning light.

I try a few more times, and after around 3 times, when I put the key in, it no long made a sound, and when I tried to start it, the lights were very very dim.

I tried my last time when it caused a spark on the positive connector.

Are those corroded terminals before or after the battery was replaced? P0170 is a fuel trim malfunction on bank 1 and P0171 is system too lean. Can you find out which one it is?

It sounds like you may have multiple problems there. When you turn the key to “on” but before starting the car, the check engine light is supposed to come on, as well as the oil pressure and charging light. That’s to allow you to verify the bulbs are working. After you stsart the engine they should all go off immediately.

When you say it doesn’t start now (sometimes), do you mean it doesn’t crank? That “rrr rrr rrrr” sound? Or it cranks ok, but it doesn’t catch and run?

You’d probably have more luck to first solve the electrical problems before venturing on any other ones. Get it to the point where it will crank, start, and run (possibly not perfectly) but consistently I mean, before working on the engine trouble codes mentioned.

I’m not sure what the second mechanic meant when he said the parts were too old. That’s doesn’t make sense, esp for a 2000 model. If he continues to insist he can’t figure it out b/c a 2000 model year is too old, find another mechanic.

@jtsanders I believe the both errors came up, I can confirm later tonight. And the pictures were taken before the cleaning, but after battery was replaced.

@GeorgeSanJose
The lights only turn on after I try to fully turn on the car (attempt to start engine). When I try to start now, no sounds what so ever.

And we already went to 2 mechanics, thinking of going to Toyota dealership, you think that’s a good idea?

If it is a new battery and it is charged, no sound indicates the starts may be gone. Have you tried to jump start it? That will help eliminate the battery as an issue. New batteries can go bad quickly. I had 2 new batteries go bad within a couple of weeks of buying them. Finally, the 3rd one continued to work. If you have a voltmeter, you can check the charging system if you can get it started.

You will probably get the car fixed at the dealer, but it will cost a lot. I’m sure they could find well over $1000 of problems on this car. Ask everyone you know for a good mechanic and eventually you should hear a couple names several times. Try them.

From a logical standpoint, this Toyota could very well have both a P0170 and P0171

I don’t really see a problem with having both codes

I think the battery needs to be tested. If it’s over 5 years old, replace it, regardless of the test outcome

Once you have a good battery, measure voltage at the appropriate starter terminals when you attempt to start the engine

The battery is less than a week old, just had it replace because we originally thought that was the problem. And yes, we tried jump starting, which starts the car, but as soon as you turn it off, it does not start, unless you jump start again

Dad asking me to make an appointment by tomorrow afternoon, preferably at Toyota. But idk if its worth getting charged more, and then again the mechanics I went to are what people recommend already so not sure where to go now beside Toyota unless I fix myself…

The first thing I’d do is replace the battery cables, or if there is enough length to the cables, you could saw off an inch of the old cable at the battery…strip back the insulation and put in some replacement terminals. Get the good solid lead ones…not those that are pressed into shape.

I think that you just can not get your old ones clean enough to make good contact, and hooking a charger to those old corroded ones is futile.

Replace the terminals, and charge the battery, then try to start it.

I’ll bet that it starts, and then you can diagnose what is causing the codes, but I think that you’ll find that everything works fine after this. If it does, then have the codes cleared and see if anything comes back…then go see somebody about the new codes.

I do have to say that at least the first mechanic did some diagnostics, but I’d sure stay away from the second one if he just shrugged his shoulders and said he couldn’t find anything.
You could go back to the first one and just ask him to clear the codes so you can start with a clean slate.

Re: The lights only turn on after I try to fully turn on the car (attempt to start engine).

Alright, so apparently my cleaning of the terminals worked, and it wouldn’t start because apparently I didn’t screw the positive terminal on well enough. (Neighbor noticed it last second, 30 minutes before the appointment) and the car has started 7/7 times now, has been running for 20 minutes.

@Yosemite Does it matter what type of terminals I get? And by that I mean is there a size or fit difference? Not talking about the metal it’s made of.

don t forget to cut back the wires, as Yosemite suggested, if there is enough slack. the corroded wire ends can cause as much problem as the bad connector you have.

terminal connectors are pretty much the same, either top mount or side mount is the major difference you must worry about

When a car fails to crank, the first thing a mechanic would do is measure the voltage at both starter terminals during attempted cranking. If either is below 10.5 volts, find out why.

I have an early 90’s Corolla and have had no-crank problems from time to time. My experience it’s more often the starter solenoid contacts are worn out, but can also be a bad battery, bad connections at the battery, faulty ignition switch, faulty neutral safety switch ( automatics), faulty clutch safety switch (manuals), and degraded wire splices. There’s also in some years a starter relay under the dash (manuals), but I’ve never had one of those fail.

If it turns out to be the starter solenoid contacts, you can either replace the starter, or what I think is usually the better choice, take the faulty starter to your local auto-electric shop and have them simply replace the contacts with new ones.

For some reason, the positive terminal is just loose no matter how tight we screw it in. And since there was not enough slack and we couldnt cut back the wires, my dad put like a copper (?) ring thing ontop of the battery connector and then put the terminal on to make it a more tight fit.

I’m not entirely sure how safe that is but I’ll try and order new terminals and cable ASAP.

The car does run fine now though beeeeeeeesiiiiiiidessss the latest engine code.

Is the light lit solid or is it blinking?

If it’s blinking, you need to stop driving and get this handled asap, because the catalyst is suffering

One more thing . . . P0300 can be generated when you run out of gas, or perhaps if the engine fails to start

The freeze frame data can give you lots of added information, such as when this code was generated

Car was struggling to accelerate past 30mph but not sure anymore, will take it for a drive tomorrow to see.

Tank is near full

A code P0300 would not be anything to worry about without another code along with it.
It could be that there was a glitch where one plug fialed to fire once, or an injector failed once.
If you had a P0303 with that, it would at least tell you that it was #3 cylinder that misfired.
I’d just clear that code to see if it comes back.