2005 ford escape xlt v6 mystery starting issues. Sooooo it’s been going on two months, replaced the starter 2 weeks ago and it ran for 2 days before not starting. Got the battery charged Friday it wouldn’t start on the first attempt, it will do a slow crank then nothing. Let it sit on the on position till the lights go off it will start. Took it to the store Sunday and after sitting a hour tops it refused to start again… took the battery back to get it charged, was at 50% when I picked it up I was told at 69% it stopped taking the charge. With the assist of jumping was able to get the car started to get it home. This is where it gets good. After sitting all night it started with no issues this morning on a battery that’s supposed to be bad at this point. On top of that I have been able to start it about 4 times total today with no issue as long as I let the lights go off in the on position. If i dont and try to just start it it will slow crank then do nothing. Would drive it to test it bit afree the last time not in the mood to get stranded again. I’m hoping someone has had this similar issue and what was done to fix it.

I could be wrong but it seems like the alternator is bad.

When the car is running dc voltage on the battery is around 14.1 and battery has a higher voltage than before starting it. Example this morning it was at 12.19. after letting it run for about 10/15 mins it was at 12.45 after the car was turned off. This is where the confusing part is with them saying yesterday that the battery wouldnt take the charge, and with sometimes it starts and sometimes it slow cranks then stops before doing the normal crank and starting if it starts at all.

With a new starter motor installed, a slow cranks usually means the necessary battery voltage is not getting to the starter motor. That could be caused by a faulty battery among other things.

Suggest to check these voltages first off:

Battery is a year and a few months old hoping I can get it replaced under Warranty but if that is not the issue what would be the next thing to check?

14.1V when running is indicative of the good alternator, battery is getting charged 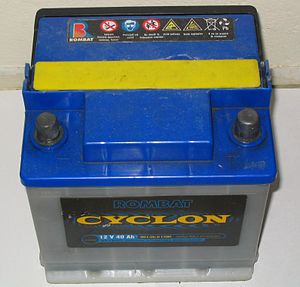 IUoU battery charging is a three-stage charging procedure for lead-acid batteries. A lead-acid battery's theoretical voltage is 2 V for each cell. For a single cell, the voltage can range from 1.8 V loaded at full discharge, to 2.10 V in an open circuit at full charge. Float voltage varies depending on battery type, i.e. flooded cells, gelled electrolyte, absorbed glass mat (AGM), and ranges from 1.8 V to 2.27 V. Equalization voltage, and charging voltage for sulfated cells, can range from 2.67 ...

the fact that voltage is around 14V, not 15 or more is indicative that battery is in decent condition

floating voltage when charged should be around 2.10V per cell or 12.6V for entire battery, so 12.19V is a little bit on the low side

you can also measure the voltage when cranking, should not go below 1.8V per cell or 10.8V in total for a healthy battery

check voltage when cranking on battery terminals first, then on the wires connected to batteries, look for the substantial voltage drop in the connections

For no or slow crank after checking the above battery voltages, next I check the voltage at the starter motor. Both terminals should measure at least 10.5 volts, terminal to starter case, during attempted cranking. If the B terminal is lower than that, and the battery is good, check battery connections, battery wires, connection at battery ground to chassis. Connection from engine ground to chassis ground. If the S terminal voltage is the low one (likely not in this case), let us know and we’ll give you some ideas then.

For the starter where would I place the ends of the meter? And for the wires is the a specific place to check them or just where there is exposed wire I can access? Electical is a little new for me.

If you haven’t done voltage testing much, measuring the starter motor voltages is probably best left to a shop. When I do it I put the car on jackstands, and run some jumper wires from the starter terminals to inside the car, so I can watch the voltages from the drivers seat as I crank the engine. I made up some special jumper wires in other words. There’s usually two electrical connections to the starter, one big thick one, which goes directly to the battery. It is usually always live. And a thinner wire, which is the “start” signal. Only active when the key is in “start”.

The starter I know is located near the top of the engine on the drivers side for the 05 escape easier to access. But if doing that test has a risk of causing more issues then I’ll leave it be for now

On my Corolla the starter is quite hard to access as a driveway diy’er, and if you’ve never done it before it can be hard to see and access the terminals too. I think your idea of deferring that test for now is a good one.

Can you give me an example for connecting to the wires? 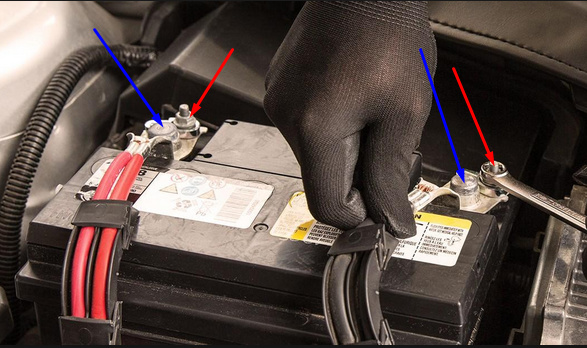 connect voltmeter to the battery posts directly - I’ve marked blue on the picture (you would need a helper!) and ask to crank, while measuring the voltage there

next, repeat for the wires connected to these posts - red on the picture

you are looking for as voltage drop somewhere, where it should not happen

this is assuming your battery holds at least 10.5 volts or such when cranking at all

if you have a voltage drop there - clean your connections

other idea would be to check grounding straps on the engine. you do not necessarily have to go to all of them, you can simply measure a voltage between the engine body and a negative battery post - if you see something above 0.5V there when cranking, I would be concerned about ground straps


This last one is what it does if I don’t let it sit in the on position till the lights go off before starting.

I posted a couple videos I did, used it to watch the voltage drop on crank and it looked like it went under 10v in the 9-10v range when it started. Third one it went under 8v if I didn’t let it sit on “on” before trying to start it.

The manufacturer’s specs on my corolla for the starter motor voltage is a minimum of 9.6 volts measured at the starter motor, applies to both terminals, measured from starter terminal to starter case. The last one where you got 8 volts at the battery is clearly not meeting the corolla’s spec. But the specs may differ from the corolla to the escape.

I’m not sure between what points are you measuring the voltage?

I assume between the battery wires…

so, the only correlation we have so far is in lower voltage we see when it does not start

why voltage would be higher when you “let is sit”?

not sure, but if we assume that some other circuit draws some extra load for short time after turning the key on, and it makes the difference between 9-10V and 8V

clearly, you have the very same battery, so I can explain the difference in voltage only by an additional load and by the barely adequate connection between the battery posts and wires

I would start from detaching wires from the battery posts, cleaning both with a fine sandpaper, then with sime cloth, applying some protective lubricant and assemble everything back, then retesting

edit: when you have terminals removed, check for corrosion not only battery-post-to-clamp connection, but on the bolt you might have connecting multiple wire terminals to the clamp, sometimes you will find a corrosion there and it may affect your voltage

from your reply, it is a real battery voltage, nothing would suggest it drops in connections

well, is it a time to replace battery?
how much time it has on it?

This battery was bought in Jan of 2017. And once it does the no start it won’t start until battery is jumped or charges