A couple of comments:
If your Torqueflite has never been serviced, operating correctly, and fluid is red, I would not open it up.
If it has been rebuilt, check with the rebuilder.
If conditions in first comment are not met, and you wish to try changing fluid I would go with a synthetic universal ATF and change it again after 500 miles.

There are some Chrysler old hands at allpar.com. I would ask there, too.

If your Torqueflite has never been serviced…

The old 2-speed Powerflite transmission was used in both Plymouths and Dodges through the '61 model year. Torqueflite was an option on '59 Dodges, but there is a very real possibility that this car has Powerflite, rather than Torqueflite.

In any event, Dexron-3 would be the appropriate fluid for either of those trannies.

Something that contains Whale oil or a replacement.

Because that’s what tranny fluid was made of back then.

I never saw a Powerflite after 56. The 3 speed Torquefkite was used fron 57 until they came out wit the 4 speed electronic tranny.

Chrysler sas the ATF+4 is backward compatible it the Powerflite. I can tell you that chrysler transmissions do not lik Dexron or Dexron 2, I have not seen what happens if you put Dexron # In an old Mopar but I would not do it.

The Torqueflight had 2 band adjustments for wear, one external and one internal. I would drop the pan, do the internal adjustment and change the filter. I think the 59 still had a drain plug in the torque converter so I would drain that too. I would fill with ATF+4 but if I was you , I would email Chrysler Corp an ask them rather than relying on a source like me that you don’t know.

Any drive train component with clutches back then used whale oil lubricants.

I don’t know. But if I had that problem myself I’d visit my local B&N bookstore and see what kind of Mopar specialty magazines they had. I’m aware of at least one they stock at my local B&N magazine rack. Then look through the advertisers, likely there will be a couple who specialize in repair parts for TF transmissions. Phone 'em up and see what they say about what fluid to use. It must be a pretty common question b/c folks restoring late 50’s/early 60’s Dodges and especially Chryslers is a pretty common thing. Check in the transportation section too while you are there at B&N, they have “Work Bench How To” manuals for older transmissions. I used one of those manuals to help figure out a problem on my early 70’s truck’s C4 transmission. Here’s another link that might be helpful.

Yeah whale oil is the additive that the dealers sold for my 81 Olds posi traction. It stopped the clattering on sharp turns instantly.

From my 1959 Motors repair book, it says to use ATF Type A for either transmission. Supposed to be done every 20,000. I had a 68 and put 108,000 on it since new and can’t remember ever changing the fluid. I can’t say that I didn’t, just don’t remember. You may have to order the fluid from someplace though and no idea what would be backward compatible. Don’t think you’d find it on the shelf though.

Wouldn’t it be nice if the OP would get back to us?

it says to use ATF Type A for either transmission… Don’t think you’d find it on the shelf though.

…which is why Dexron-3 is usually considered to be the replacement for the old Type A fluid.

I never saw a Powerflite after 56. The 3 speed Torquefkite was used fron 57 until they came out wit the 4 speed electronic tranny.

My father’s '59 Plymouth Belvedere had a Powerflite transmission.

My family had a 56 Chrysler Windsor (I think that was the model) when I was just a little kid, and I remember I had an interest in how it worked. So my dad would let me sit in his lap as he drove errands around town so I could push the buttons operating the transmission. He’d say “press D now”, and away we’d go. When we arrived at the store he’d say “ok, press R” to parallel park. Then he’d say “Now press P”. Of course no seat belts, me wedged between him and the steering wheel, seems pretty unsafe. But that was life in the 1950’s I guess.

George–Your memory is faulty.
The 2-speed Powerflite–with which your father’s '56 Chrysler was undoubtedly equipped–did NOT have a “Park” button on the transmission controls.

Even when the three-speed Torqueflite was introduced, for the first few years it had a lever–next to the pushbuttons–to engage the park pawl, and did not have a pushbutton for “Park”.

I seem to remember it had 4 buttons. None of them were P? Did a little googling, and you are 100% right. N, D, R, and L were the buttons, no P. I found this old tv commercial while googling, kind of fun to watch, only 2-3 minutes. It shows the buttons but the picture quality is pretty bad, can’t really see what they are labeled. But the wiki link shows a clear picture. 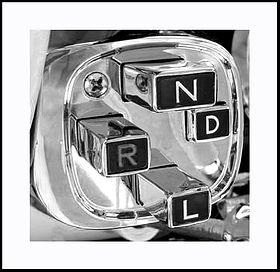 PowerFlite is a two-speed automatic transmission engineered and produced by the Chrysler Corporation and used in their passenger cars from 1954 to 1961. Production began in late 1953; despite the launch of Chrysler's three-speed TorqueFlite automatic in 1956, the simple and durable PowerFlite remained available on Plymouths and Dodges through the 1961 model year, after which it was discontinued. Chrysler was the last of Detroit's Big Three automakers to introduce a fully automatic transmission, ...

Interesting. I did see that O’Reilly seems to stock ATF type A for about $6 a quart. NAPA also has something compatible.

Did a little googling, and you are 100% right

Of course I am!