Last week my 2006 Chevy Cobalt stopped running. My husband’s truck battery had died and he decided to jumpstart it with my car. I pulled up next to his truck and turned my car off. It had been working just fine to that point. He hooks up the battery cables on both vehicles, I don’t remember the sequence, and as I go to start my car, it now won’t start. He thinks it’s a complete coincidence but I’m beginning to wonder. Now we have 2 dead vehicles and I don’t know where to keep going with mine. He’s terrible working on new cars so I’ve troubleshooted it down to the point that there’s no spark coming from the car. I changed the spark plugs as they were due for a change and tried a new coil pack in case my old one was done. I also check any fuse that had to do with the ignition system in case one had been blown by the jumpstart. After doing some research online this weekend, I’ve got a whole list of stuff to check but I’m trying to figure out what is the most likely candidate. The battery and alternator are from last October. I’ve also ran a computer scan for codes but it isn’t showing up any. Is there a more advanced scan tool I can rent that may tell me if something is out of whack? I’m trying to avoid taking it to a mechanic as I can’t necessarily afford it at the moment. Or is there a way to reset everything in case the jumpstart got something out of sorts? I’m grasping at straws here and my handy dad lives 10 hours away so he unfortunately can’t help me either. Thanks!

Sounds like the battery cables were connected up backwards. Most likely situation based on what you posted. In that case, something gets damaged. Best case is a fuse or two blew. Worst case, a module failed. Start by checking fuses. Can you describe what it does do now? For example, do the dash lights illuminate as normal when attempting to start? Does it crank normally just not start? etc

Have you been able to start your car? Does it crank normally but not start? If it does not crank, you need to get a fully charged battery in your car and see what happens.
Chances are, yes jumping his truck with your car not running during the jump drained your batter to the point where it can not start your car even with the jumper cables removed. And of course the possibility he did not get the polarity correct when he attached the cables.

It’s a fairly new battery and I checked the voltage yesterday while we were working on it. It was reading 12.3 volts even after trying to start it again.

Everything seems to work just fine. It cranks normally just won’t turn over. None of the spark plugs are getting any spark to them.

A no-spark condition can be caused by a faulty ignition control module, 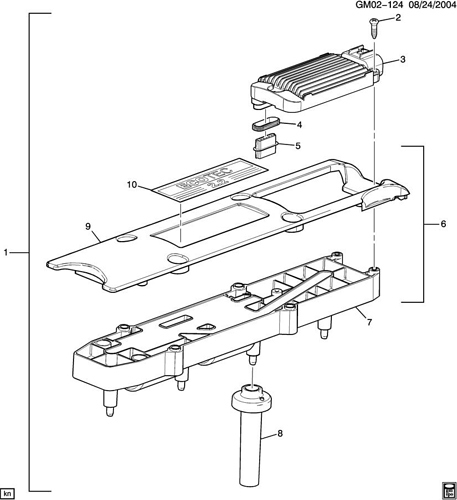 Or a faulty crankshaft position sensor.

I was actually wondering about both of those. How do you check the ignition control module?

It’s easier to check the crankshaft position sensor with a multimeter.

If nothing can be found wrong with the crank sensor, then the problem is most likely with the ignition control module.

Since the ignition doesn’t appear to be working the first thing to check is power to the ignition. Checking the fuses has already been brought up and hopefully they have been checked, both in the dash and under the hood. If that hasn’t been done yet you should do that at this point. If they are all good then you should verify that power is getting to the ignition system. If the power is okay then the crank sensor may be the next suspect.