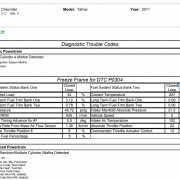 Here are some reading on my 2011 Chevy Tahoe I did today, just at idle. Have not drove it in 2 weeks but it starts. Its idling VERY rough,whenever gas pedal the engine bogs down and dies if I do not release the pedal.

NOTES ON THE TRUCK
Its showing codes P0300 P0304 P0171 P0174
The truck has around 195K miles on it. Did a oil change right before the truck started acting up. The truck used to have lifter problems (tapping) but they come and go. Have not had the lifter problems in the while. But since the truck died the lifters noise has come back… Truck also had new spark plugs, spark plug wires, air filter, oil/filter. The oil levels are pretty normal, no watery/milky oil. exhaust smoke looks normal, A/C works but when you turn it on makes the truck idle even WORSE, like its just ready to cut off. When you first cut the truck on it makes all kinds on squeak noises like a belt, it has the lifter tapping noise.

STORY:
A month before the truck breaks down I decide to do a small tune up on it just because it was running rough at the time, It was having misfires and lifter noise ticking was coming and leaving, these were making the check engine light come and go until it stayed on for some days blinking due to the misfire so I figured the problem/engine was getting worse. So I changed the spark plugs & wires, and gave it a oil change with new oil filter, also put a fuel injector cleaner in the gas tank to see if that helped (when I did this the check engine light went away until the next day). The truck was running pretty okay except for the misfire (no lifter noises, but can tell the truck did not have as much power as it used to but it drove pretty normal). I also took the fuel rail off to inspect/change some injector o-rings, some of them were cracked/old, This did not make a difference to the trucks performance after I fixed it.

I say about a month after doing all that, while driving the truck’s engine got really low power (“ENGINE POWER IS REDUCED” light did NOT come on). Power got so low to the point it did not want to go over 10 MPH, I had to pull over because it was pretty much not moving. If I press the gas pedal to fast/hard the engine would start bog down and die, If it died it would not start back it would just crank over I would have to wait 5-10 minutes for it to start and it would not die/bog (UNLESS I PRESS ON THE GAS) but it would be idling VERY ROUGH. There were no signs of the truck being over heating, It also makes a very loud bogging down noise when the gas pedal is pressed. YOUTUBE VIDEO < Here is a VERY similar sound it makes when pressing the gas you can see in the first 30 seconds of this video. It sounds like the noise is definitely coming from the air filter box( which is strange). Got the truck towed back to the house and started my diagnosis. We have misfires in cylinders #1 & #4. Cylinder #4 has 2-3 times more misfires then #1. Also cylinder #4 has VERY low compression it was around 60-90 when I checked twice, all others when up in the 180-190 area. switched ignition coils/spark plug wires around that did not change anything. I also would like to say I feel like the truck has more power when the engine is cold, When I start the engine cold it makes all kinds of tapping, squeaking noises, but when you press the gas the engine actually revs up, But the more the engine warms up the less power it gets and the more bogging down it does instead of revving up when pressing the gas.

Just trying to get some suggestions on what the problem maybe, I heard a few suggest its the head gaskets, or that its just the failed lifter that is causing all this

Likely as BIG vacuum leak or a nearly failed fuel pump. This this is getting way too much unmetered air or way too little fuel. Check fuel pressure, if that is OK, check for a big vacuum leak.

With nearly 200K on the engine, see if you can just buy a junkyard engine with fewer miles. It may be cheaper to swap the entire engine than fix this one. 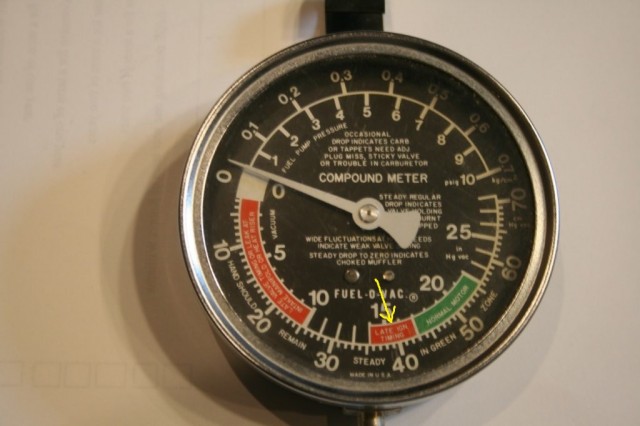 Did a vacuum Gauge test the other day, the needle was steady in the “LATE IGN TIMING” area.

The Fuel Pressure is always steady and showing good pressure.
Can a bad head/intake manifold gasket cause a big vacuum leak? The most I will do to this engine before replacing it will be changing the gaskets. If the problem is deeper then that I will just replace the engine instead.

15 inches of vacuum is too low. Look for a vacuum leak, if you want, but nothing you will find will fix the very low compression of cylinder 4.