Why does the rear suspension sink when the emergency brake is applied?

I have been recently acquainted by a question regarding exactly why rear suspensions sink when the e brake is applied and in drive (in an automatic car), or in the case of newer cars, when holding the gas and brake at the same time makes the rear suspension sink.

So I went to my simulation software and did some testing.
As it turns out, only cars with control arms that were angled sideways (no, not trailing arms) provided this ‘dipping’ effect, as well as trailing arm suspensions. When testing suspensions that didn’t have slightly longitudinally mounted control arms, only 100% transversely mounted control arms, this effect would not present itself under both conditions.
This is a good image highlighting the types of control arms I’m talking about: (taken from the Lexus GS, which has the same dipping effect I have described) 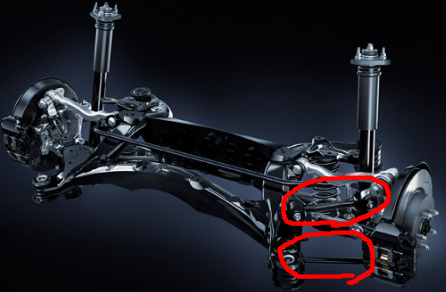 I’m not sure if you would call those suspension arms trailing arms or control arms, since they are both slightly angled longitudinally and transversely. I know this has to do with torque being applied to the suspension, but I can’t figure out exactly whats going on. Thanks if anyone can help!

Also, I do apologize if these questions may be fairly obvious- I’m not too inclined in physics or anything.

No, I don’t think its axle wind-up, it happens without the axle being ‘would up’ in a sense, it just compresses the suspension

Anti-squat, anti-dive and anti-lift geometry which will be referred to as “anti-geometry” when discussing them as a whole is a form of geometry at the front and rear wheels that alters and controls the amount that a car will compress the springs due...

Brake anti-dive geometry to resist brake dive at the front makes the car ride hard over impacts. Brake anti-lift at the rears makes that axle ride better over impacts. Car makers make the front brake anti-dive essentially zero for a good ride and the brake anti–lift greater than 100% so the car doesn’t pitch (dive) so far under braking. The front squats, the rear squats, the car is stable and the passengers aren’t upset.

I know about weight distribution and about anti dive, anti squat and anti life geometry, but those all act under speed, this phenomenon I’m describing happens when you’re stopped. Give me a minute and I’ll record a video of this in my simulation program.

If the drive wheels are applying torque to the ground, this effect will happen. It happens ANY time there is a brake torque applied at the rear axle and some force is trying to move the car. You could put the car in neutral and pull the front with a winch and the rear would squat if you used the brakes or the emergency brake.

No need to upload a video, I know how this stuff works.

Basically, the way I can describe this is, when you’re stopped and you hit the gas and brake, and the rear of the suspension dips, thats because the wheels are trying to move the car, and therefore the torque is transferred to the rear suspension, causing it to dip. This torque is removed once you put the car into neutral. Now, lets say I test the situation where I would tug the car forward by force, and put the car into neutral, and set the handbrake. The rear suspension dips even though its in neutral. However, if I activate the footbrake and tug on the front end, the rear stops dipping, because now the drive wheels have ‘something to lean against’ and they are no longer dealing with the torque. This is a pretty long explanation, maybe too long and too hard to understand…

This is a pretty long explanation, maybe too long and too hard to understand…

And not really important . Why would you apply you do any of this anyway ?

It really doesn’t apply, I just enjoy learning about this sort of thing, it just makes me think and gives me something to do lol

It only happens when you apply the throttle with the brake applied, correct? Not if you’re just sitting there and put on the emergency brake. It is in response to the torque being applied to the driven wheels, as others have said. The car body is trying to ‘wheelie’, but the rear brakes are preventing it from doing so.

when the car is being dragged from the front, that when the footbrake is applied to 100%, the rear suspension doesn’t dip

therefore the torque is transferred to the rear suspension, causing it to dip

No, the driving force is opposed by the rear brakes. Engine torque does not affect the squat of an independent rear suspension, only on live axles.

footbrake and tug on the front end, the rear stops dipping, because now the drive wheels have ‘something to lean against’ and they are no longer dealing with the torque.

Because the front brakes are providing more resistance to the system and the rear doesn’t have any compliance… i.e. can’t move… i.e. can’t dip.

You seem to really want to dig deep into the theory. I’d suggest you buy a copy of Race Car Vehicle Dynamics by William and Douglas Miliken. It has some in-depth chapters on suspension design theory that is FAR easier to read and understand than an actual textbook on the subject like Gilliespie’s Fundamentals of Vehicle Dynamics. Both are used by engineers that design this stuff.

This also happens when the emergency brake is applied when the car is in Drive. Basically, the way I can see it is that the e brake is holding back the wheels from spinning, so that torque has to go somewhere, and in this case it goes to the rear suspension, making it dip.

So, I was I wrong about the torque from the transmission causing the suspension to dip when the drive wheels are under the force of the parking brake?

Also, thank you for suggesting that book to me, it does indeed look interesting. I’ll check it out!

This also happens when the emergency brake is applied when the car is in Drive.

That’s exactly the condition I was referring to.

Why would you apply you do any of this anyway ?

You discourage people from acquiring knowledge, then you write a gibberish sentence like this.
God bless the “ignore” button.

After one small test, it appears that the rear suspension does dip more when more power is applied when the brakes are also applied. I suggest watching this video at timestamp 3:32 https://www.youtube.com/watch?v=YintI5yhvCc
You may see what I’m slightly confused about.
The car in the video has a multilink independent rear suspension… it does appear to have a good amount of anti-lift too.
In the video, the more throttle is applied, the more the suspension dips.

Also notice that the car actually moves a bit when the throttle is applied… it overcomes the front brakes and allows the squat when torque is applied.

The side view instant center can be pictured as a swing arm. That arm rises from the wheel center to the middle of the car. When the suspension moves at all, the motion of the rear tire is up and backwards. Also consider the suspension is rubber mounted and on rubber tires so both the front and the rear will deflect under load. That allows the squat motion you see in the video.

I understand the concept now.
At first it was a little bit hard for me to grasp, I apologize for that I made this a little longer than it needed to be.
So whenever there is torque applied to the wheel, whether it be from the ground, or from the axle, when the brake is applied, the rear suspension will dip thanks to the anti lift geometry.
In the video I sent, the more throttle applied = more dip, because there is a force trying to move the car, hence more dip. So basically, whenever the force trying to move the car gets stronger, the more dip occurs (with the rear brakes applied to course).
Is this a good explanation?

So whenever there is torque applied to the wheel, whether it be from the ground, or from the axle, when the brake is applied, the rear suspension will dip thanks to the anti lift geometry.

You have it half right. The torque that makes it dip is brake torque. The torque for the brakes to resist is applied from the engine.

If the brake were not applied, any dip would be from acceleration. If the brake is on and the engine’s torque is applied to the wheels, there is a reaction. Confusing? Yes, it is.

An independent rear suspension tries to twist the differential out of its mountings but does not cause the rear to dip by itself. The car must be accelerating because the dip is caused by the center of gravity being above the point where the tire touches the ground.

It took me 2 degrees in engineering and 10 years to really understand this. It is complicated.

It took me 2 degrees in engineering and 10 years to really understand this.

Staying awake in statics class. Vectors are our friends!