At 15,000 miles when rotating tires, we were told our tires were shot. We needed to purchase 4 new tires. What would cause tires to wear at 15,000 miles?

Bad alignment, cheap original equipment tires, under-inflated tires, failure to rotate the tires each time you get an oil change, or your kid drifting (search the term on youtube…) the 'Nox when they borrow it.

Or maybe the dealer just made some extra money off of you. Did you SEE the tires they say were worn out? Did they look like this? 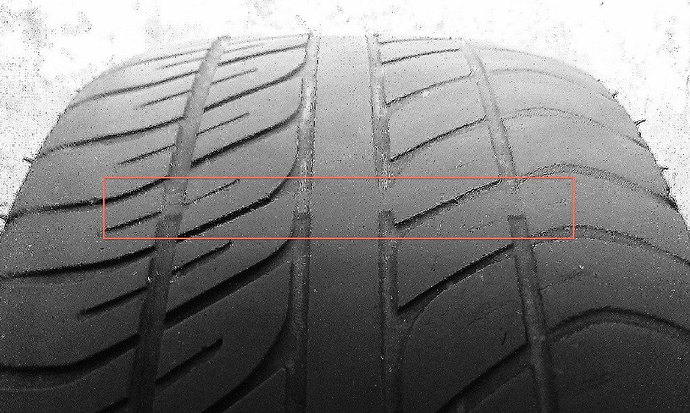 our 2016 work equinox had the wheels stolen. quotes to replace them were in the 2000 range. oof. shop ended up using USED wheels and put on some hercules tires from korea? i think we overpaid. but its insurance so whatever. i found some used nox rims at boneyard for 200/set. i know i could have replaced the whole setup for <700 but thats life.

And just what that have to do with the persons question about needing tires at 15000 miles ?

Unless they actually LOOK worn as per the other post, you may not need new tires. We routinely get 50,000+ miles out of a set of first line tires like Michelin. And that’s mostly city driving.

I assume the tires were replaced for free under warranty? I realize tires are not covered by the vehicle manufacturer’s basic warranty, but there is a separate warranty from the tire manufacturer, which would certainly be longer than a year or 15,000 miles.

Tires on our nox wore quite well. Useless filler comment. Is that annoying? Easy to poke folks buttons.

Did you get an alignment with these new tires? Under the circumstances, that would be a good idea.

The cost of the new tires was prorated.

Just to clear up some misconceptions:

OE tires - the ones that come on new cars - do NOT have a mileage warranty (with a few exceptions). That’s because the car manufacturers don’t buy the tires with the mileage warranty (which has some costs associated with it). However, the tires do have a “Materials and Workmanship” warranty which covers such things as appearance and structural integrity - and there is usually a time limit.

OE tires are also built to the CAR MANUFACTURER"S specs, which are different than what the tire manufacturer would do if left to their own devices. That’s another reason not to provide a mileage warranty as most OE tires are designed for good fuel economy, and not good wear.

Tires sold in the replacement market may or may not have a mileage warranty (or a road hazard warranty) and many times the lack of a mileage warranty is because the tires are OE downstreams - the same tire being shipped to the car production plant, but instead was shipped to a retail outlet.

Now the exceptions: SOME car manufacturers provide a warranty on the tires they apply to their vehicle - notably GM. So I’m surprised that a GM dealer wouldn’t take the opportunity to do a warranty claim through the GM warranty system. It would cost them nothing - except for not making a profit on selling a tire.

Also, a FEW tire manufacturers provide a mileage warranty on SOME of the tires they supply OE. This is kind of a rare thing within the tire industry.

But there is always the tire manufacturer’s 800 number. They will sometimes provide a “Goodwill” warranty - an occasional thing to handle situations as was described.

And just what that have to do with the persons question about needing tires at 15000 miles ?

@Volvo_V70, and just what does that have to do with the persons question about needing tires at 15000 miles ?

We only got 18k out of the Continental tires that came with our 2012 Odyssey. Mostly highway miles to boot. That’s two strikes for Continentals for me. The tires that came on my Camry also wore out in very little mileage. In contrast, the Yokohamas I have been buying since have been very good, lasting 50-65k on the same vehicles, no alignments done on either. This may be the new normal, cheapest tires possible on a new car…

This may be the new normal, cheapest tires possible on a new car…

I wonder if that could have unintended consequences for the tire supplier? I’d take a close look at the brand of my prematurely worn out tires and be sure not to buy that brand as a replacement (and those are likely to be more costly tires, as well).
CSA

This may be the new normal, cheapest tires possible on a new car…

It’s pretty-much normal, but it’s not new. My father’s '66 Ford Galaxie 500 came from the factory with some kind of BF Goodrich Silvertown tires, and they were evenly-worn across the tread by 16k miles.

My present car came from the factory with some kind of Continental tires, and although the tread probably would have lasted for about 40k miles, I dumped them when there was still 5/32 of tread remaining, simply because they were such crappy tires.

My friend’s Rav-4 came from the factory with some sort of Bridgestone tires, and they were evenly worn-out by 18k miles.

Well, I can speak for one consumer that is taking that approach. I won’t even consider them going forward. And I realize they may be manufactured with lesser quality materials so they don’t last as long as their normal tires. But when do they decide to reduce the quality of their regular tires to save money? They already know how to do it so it’s not as much of a stretch for them

I know someone that has tires changed proactively, before they take possession of a new car. I used to think this was ridiculous but now I’m starting to consider it. He has managed to get some consideration in the exchange- on the order of 15-20%.

Our 2017 rav4 came with Michelin latitude tour hp,looks like an ok tire.

OE tires are also built to the CAR MANUFACTURER"S specs, which are different than what the tire manufacturer would do if left to their own devices.

I really have a hard time understanding this. Why would a car manufacturer specs be so low? EVERY (and I mean EVERY) vehicle I’ve bought in the past 20+ years - I’ve ALWAYS been able to buy FAR BETTER tires that were NOT designed for my vehicle. These tires are FAR BETTER in every measurable spec. Better mileage, better handling, better braking, longer lasting…you name it…the aftermarket tire is BETTER. Why on earth would a car manufacturer NOT recommend one of these tires? Many times the aftermarket tire has been around before the new vehicle was even designed. It defies logic why a car manufacturer would do this. Can’t be cost because an aftermarket tire that’s already designed and selling has to be cheaper then a brand new design tire for a limited market (one vehicle). And every new vehicle I’ve owned comes with several different tire manufacturers.

My present car came from the factory with some kind of Continental tires, and although the tread probably would have lasted for about 40k miles, I dumped them when there was still 5/32 of tread remaining, simply because they were such crappy tires.

My 2006 Toyota Matrix came with crappy Continentals which were done at 25K miles.
For it’s third set I took a chance on a different model Continental with high ratings on TireRack (PureContact).
Those were good.

A tire that wears out in 15k miles HAS to be cheaper to manufacture than one that lasts 60k miles. And they are buying boatloads of them so in the end, it does save them a considerable amount of money over using an existing, better tire initially. Ever seen builder grade materials used in new homes? Same thing. A builder grade shingle is far thinner than one you will find aftermarket. It saves the builder a fortune and the new owner doesn’t know the difference until 10-15 years down the road. Same for the car. A year or two later, you buy new tires and grouse a bit about it but it doesn’t stop you from buying the next one.