White Smoke Coming Out of TailPipe car Cuts off

I have a Sequoia 01 and my car will start up but won’t run for long. It stumbled and cuts off after about 30 seconds. White Smoke is steadily coming out of the tailpipe. 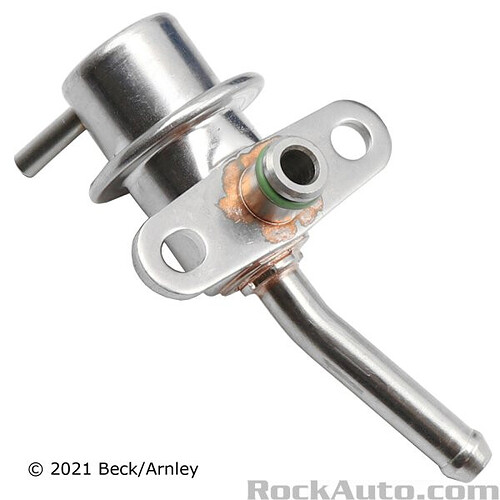 if gas leaks out of this connection, the engine is sucking excess gas into the engine causing the smoke and the engine cutting off.

I forgot to mention I just replaced the fuel pump with after market pump today but this is the same thing the car was doing that made me replace the pump.

One thing that changes is the white smoke went away after I checked the vacuum on the regulator but the car still cuts off, and it’s cutting off sooner. And eventually stopped starting up

Is my head gasket blown?

Is my head gasket blown?

Maybe. Are you loosing coolant? If so, how much do you need to add per 1000 miles? Head gaskets problems are sometimes difficult to test for, problem only ID’d once HG is made visible by removing head. But two common test methods w/out head removal are to pressurize cooling system to see if it holds pressure, and a chemical test of coolant to see if it contains exhaust gasses. A simpler method, a helper in car behind yours watches tailpipe as you rapidly accelerate up a freeway on ramp. If clouds of white smoke appear, more as you accelerate, pretty good chance blown head gasket. (Note: w/some engine configurations symptoms could mean the intake manifold gasket is leaking rather than head gasket.)

Sometimes head gasket leaks will cause spark plugs in affected cylinders to be steam cleaned, appear nearly unused compared to others, so that’s an idea too. .

There’s other possibilities for this symptom of course. A shop would usually start by checking for stored diagnostic codes. Is the check engine light on? If you have the diagnostic P-codes, you’ll get more ideas if you post them here.

There is not check engine lights on. I got to pull the spark plugs.

What else could give consistent white smoke besides HG? I’ve only heard of fuel injectors doing that

What else could give consistent white smoke besides HG?

On some configurations an intake manifold gasket leak could allow coolant into the cylinders, but you’d be losing coolant. If water from the normal combustion process accumulates in the exhaust system (for example if you do a lot of idling and parking facing downhill), that can produce white-ish exhaust steam as it heats up next time the engine is run.