Which anti-seize for the wheel nuts?

It seems like the common nut-splitter tool (sized for lug nuts) would make it pretty easy to remove them, locking or non-locking. Destroys the lug nut though. .

They were a pain in the neck when I had them for my wire wheels. I ended up just welding a nut on a couple instead.

I was mainly talking about the ones where the outer part of the locking lug nut spins. so, hammering a socket on would not work to take them off.

Wheel locks are an ineffective pain in the rear. You can thwart the amature with spline drive nuts but a pro will get your wheels anyway.

but what about the ones where the outer sleeve spins?

The same method will work for them. Or if the extended type there is probably enough sticking out to get a pie wrench on. 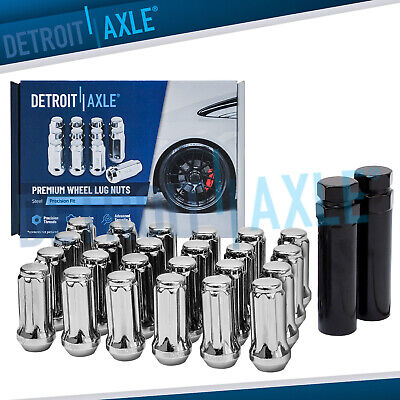 I think titanium studs are available. I’m not sure what their recommendation would be at that point. Although my new lug nuts are locking, that is not why I bought them, I just like the way they look. If I read carefully that loctite - anti-seize was included, I might not have bought them.

It’s easier to pound on a socket designed for the removal of rounded off lug nuts.

even regular 12-point socket works to get lug nuts off if you tap it with hammer and then apply a breaker bar.

the shop working on my wife’s car swapped the “key” stored on glove compartment with some another [poor] guy’s one, so it did not fit when I needed to remove flat tire

Titanium lugs/studs? Why? Much more to be saved with lighter wheels.

By the time Studebaker bought STP, the company could not have been saved. The only car that was left was the Lark, which could never sell in enough quantity to save the company.

Getting back to the original post, put me down as another vote for lube on lug bolts. I grew up in Iowa and regularly replaced studs that had twisted off because they were rusted solid. PITA because I usually had to remove a rusted-on brake drum to get to the stud. On my cars over the past 50 years, I have always used a tiny dab of wheel bearing grease. Well over a million miles on a half-dozen cars. No rust, no broken studs. never had a nut loosen. I tighten them just a bit less than the torque spec to avoid over-stressing the bolt or hub.

I’m just going to add this, if you do them dry, make sure the threads are CLEAN. Rust and dried out and contaminated lubricants will throw off the torque. If real bad, use thread chasers, otherwise a wire brush/tooth brush and some solvent will do.

Also with steel on steel, zinc anti-seize and copper anti-seize should not be used. If you are going to use an anti-seize, a moly-lith grease is the best. A 12mm lug stud will take about 200 ft/lbs of torque before stretching so 80-103 ft/lbs with a lube will not damage them. The choice is yours.

But absolutely lube around the hub hole.

Old thread but reminds me of a long time ago ago when as “Sir Galihade” I voluntered to fix my girlfriend’s flat and greased those “old sticky” lug nuts. Couple of weeks later she pulled up to a traffic light wondering “Where in God’s Name that tire that passed her came from until she heard the Thunk!”.

Almost 50 years later, marriage, 2 children, kid’s marriage, college and grandchildren I have never admitted my stupidity in “lubricating the studs” and suggest that nobody does the same.