What's the diff between a proportioning valve and a

I have a 94 Ford Taurus wagon.

My mechanic says I need a proportioning valve for my brakes, but also says that that part has been discontinued. Looking on line I have found pressure metering valves. Is this the same thing or different?

I suspect different. Proportioning valves equalize braking pressure (rather, de-equalize them) so that braking will not lock the back tires while the fronts continue to turn. Since the braking is done more by the front, the fronts get more pressure. The pressure metering valves sound like they do a similar but different function. There should be an aftermarket part for that car. If not, a valve from a wrecked car at a bone yard might work out.

No. They’re not the same. Here’s a link that shows both in a brake system. 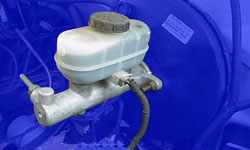 What exactly is your braking problem?

On a '94 Taurus sedan, it’s called a proportioning valve, and it’s mounted under the rear of the car. It has a linkage to the lower control arm so it “senses” the vehicle load and meters the brake line pressure (more pressure to the rear with the car loaded, less pressure under light load to prevent rear-wheel lockup).

But! You have a Taurus wagon, and it apparently uses what ARE referred to as “Pressure Control Valves”, not prop valves. And they are installed at the brake master cylinder, under the hood. I suppose they could be referred to as “metering valves”; but they restrict pressure linearally instead of by vehicle load. Which strikes me as odd; I’d think a wagon would be inclined to carry a wide range of cargo weights, more so than a sedan. But that’s just me…

I can see the sedan-type prop valve failing; moving parts, hostile conditions. I’d think the inline valves under the hood would be less trouble-prone. I’m wondering if the mechanic is trying to sell you a part you don’t really need; I think the under-car valve is more trouble-prone and an easy sell. I wonder if he knows the wagon doesn’t have one. Ask him how he diagnosed it, did he use a pressure gauge or is he taking a guess?
What is the car doing? Are the back wheels locking up early during hard stops? Or does the mechanic suspect that the rears aren’t working at all? What’s the diagnosis?

Here’s the rest of the story.
My car is a 94 Taurus LX station wagon with the 3.8 L engine (yes, the engine with the head gasket problems-- we replaced the head gaskets at about 100,000 miles).

In my driveway, my brakes weren’t working–brake pedal to the floor with little stopping ability. The day before, the red dash light was on even though the parking brake was off, but I didn’t notice any loss in braking ability. Also in my driveway, there was a puddle of fluid under the car, just inside the driver’s side front wheel. (So, I’m assuming that this proportioning valve is located under the front of the car near the drivers side wheel.)
Had the station wagon towed to my usual mechanic. They diagnosed that the proportioning valve was bad and when they called a few Ford dealerships to find the part, were told that the part has been discontinued.
Now, I drive my cars until they drop, which usually means either the engine or the tranny needs rebuilding. I don’t give up on a car for a small part, so I started the on-line search. Came across the pressure metering valve and was hoping that was what I needed, but sounds like it isn’t. I think the pressure metering valve is for cars with discs on the front and drums on the back, but I think my wagon has discs all around.
I did contact a used parts dealer who says that the proportioning valve has to be sold as part of the “anti-lock brake assembly”, which he has. So I’ve asked him to send it to me. I guess I’ll see when I get it.

Thanks for your help!

Really interesting Tester . . . a good article to read, Thanks! Rocketman

Here’s MORE of the story.

The part that is leaking is a valve positioned about 1 foot below the master cylinder, towards the driver’s side of the engine compartment. there are brakes lines going into it and brake lines going out of it. The valve is about 2 inches long and looks like of like a T. Looks like there are two of these T-shaped blocks and they are connected together. It is separate from the master cylinder.
Any help on where to get one of these would be GREATly appreciated.