After sitting in sub-zero weather for a few days, I needed to jump my 2014 Outback to get it started. Hooked up the cables, turned the key, and then the horn started blasting. Disconnected the cables and eventually realized I had hooked them up backwards. Now I’m beating myself up pretty hard here and honestly I’m worried about my cognitive state having done something like that-- I’m not a mechanic or anything but I’ve certainly jump started a car before and understand enough about electricity to not make a mistake like that.

Anyway I corrected the cables and it started up. But as one might expect some stuff is not working. It can drive and all the exterior lights, wipers, etc seem to be working, so at least it’s functional. The following are not working (and it’s possible there might be something else I haven’t noticed yet):
Radio/nav system
Interior overhead lights
Dash clock/mpg display
Remote door lock/unlock
Remote starter

So, while I may or may not be able to fix this myself, I’d like to do what I can to diagnose the problem. I’ve checked all the fuses (got a reading with an ohmmeter, didn’t pull them all out). I recognize it’s possible that I’ve fried all these components, but I’m hoping that’s not the case and there’s a single point of failure, like a fried fusible link.
For those of you who might have some familiarity, where would you start looking?

There may be fusible link(s) near the battery’s + terminal. The wire inside melts, like a fuse. Test each for continuity with an ohmmeter.

See if the main fuse (A) in the under hood fuse box blew. 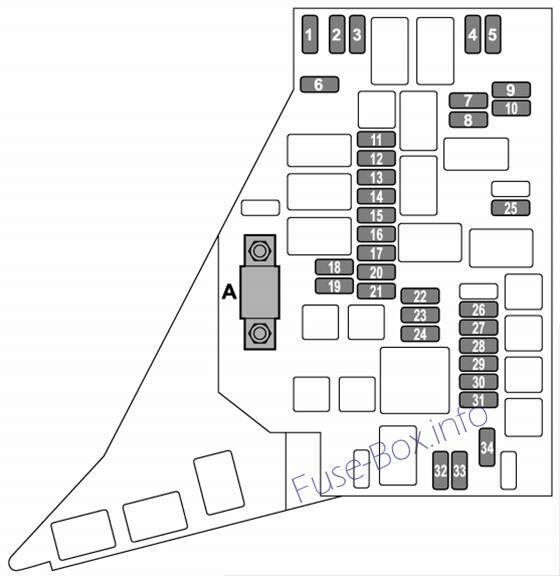 I might be misunderstanding what the “main” fuse does, but wouldn’t I be having a lot more problems if it were blown? I took a look at it and didn’t see any signs of damage looking through the clear top. I’ve never worked with a fuse of that type. How would I go about testing it?

As a last ditch effort, I suggest you try the following.
First and foremost- Wear Safety Glasses!
Completely disconnect both battery cables, touch the cables together for 1 minute and re-connect.
This drains any residual current in the system-computers. The computers then re-learn.
I successfully did this in my GMC Suburban when all else failed. 5 years later it is running fine.
My situation was I moved the GMC out of the garage on near zero weather. When I tried to restart, absolutely nothing! I called AAA for a jumpstart and again, absolutely nothing. I remembered this procedure told to me by a certified mechanic. I performed it and it worked.

Please know that you are not shorting the system because your cables are disconnected from the battery.
Here is a You Tube Video- How To Reboot Your Car ~ Battery VooDoo - YouTube
Hope it works as well for you.

It was worth a try, but no luck.

I was hoping. Thanks for the feedback.

Coming back to update since I just got a notification on this thread. So, in case anyone was on the edge of their seats wondering what happened here: I ended up taking it to a garage and it turns out I should have pulled the fuses out and checked them more thoroughly. A few were blown and the battery was completely dead. New battery and a few new fuses and everything was good-- well, I later noticed a headlight and a couple parking lights out, but that may have been coincidental.
So, I definitely lucked out. I’m still very disturbed that I managed to make that mistake in the first place, but at least everything was fixed with minimal cost.
Thanks for all the suggestions!