…from Canada to Mexico.
This is definitely not good news for Canada, or–possibly–for Corolla buyers: 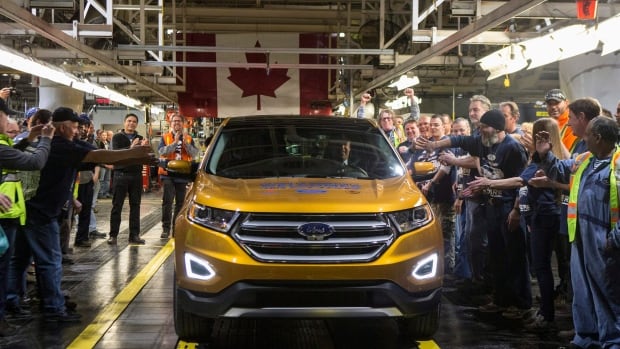 The news that Toyota is moving production of its popular Corolla vehicle to Mexico from Cambridge, Ont., is further confirmation that Canada has slipped to third place in North America's auto sector, but don't go writing the obituary of Canadian car...

I’m not sure why it might be bad news for Corolla buyers. The myth that some countries can’t mass produce quality products is just that, at myth. In fact, I can’t think of a single manufacturing problem that was systemic to an entire country. Most are localized to one factory.

^
That is why I used the word, “possibly”.
In fact, Ford’s highest production standards are apparently found at some of their Mexican factories, but–conversely–VWs made in Mexico have been more problematic than those made in Europe.

It all comes down to the supervision and the standards that are used in any particular location.

This, from last October:

We like the Honda Fit, as it delivers a large amount of behind-the-wheel fun in a small, clever package, and we’d recommend it to just about anyone shopping for an affordable, practical runabout. Unfortunately, we would have to add the caveat that it...

There are challenges in Mexico, but Audi says it’s much better than Brazil.

I don’t see a problem. Canada has the resources, technology, people, and experience to do great work, and Toyota’s corporate culture is one of proven focus on quality. Teaming up the Canadian workforce with the resources and focus of Toyota seems like a great match.

I’m more concerned about the partnerships they’ve formed with Subaru and BMW than I am about their moving a facility to Canada.

With world governments struggling to devalue their currency relative to the USD, shipping costs increasing and environmental restrictions materializing out of thin air the automobile industry is throwing darts into a spinning globe hoping to hit a bullseye that hasn’t been painted yet. With money available at zero interest the darts they throw are quite cheap.

Teaming up the Canadian workforce with the resources and focus of Toyota seems like a great match.

Do you mean Mexican workforce?

I’d say the Mexican workforce is more than up to the task of assembling Corollas. 20 years ago they would struggle but no longer. The workforce is pretty well educated. My former company started doing simple assembly in Mexico in the 80’s and now has an engineering center there designing cutting edge stuff. The workers from the 80’s sent some of their kids to college and tech schools with their wages. Now those same kids design the products their parents used to assemble.

Maybe the spike in well-paying jobs will put a dent in drug trafficking in Mexico.

Nissan has extensive manufacturing facilities in Mexico, as has Ford. With the right management cars from there are as good as any.

Toyota Canada is retaining the higher priced cars such as Lexus, and low volume specialty models.

“There are challenges in Mexico, but Audi says it’s much better than Brazil.”

I don’t doubt it.
A former co-worker had the misfortune to buy a VW Fox that was manufactured in Brazil.

In addition to the car being an overall lemon, when it came time to replace the rotted-out heater core after only 3 years, it turned out that VW of Brazil had decided to rivet the heater core into place. His mechanic was…not happy…about having to deal with a riveted-in heater core in the very confined space in which he had to work.

Don’t worry about Canada, they will still make lots of snow blowers.

“Don’t worry about Canada, they will still make lots of snow blowers.”

That’s where all my snow shovels come from and Sorel boots, too, eh? And… don’t forget about Red Green (Steve Smith), eh? And Bob & Doug McKenzie, Guess Who, Justin Beiber (sp?), eh?

Oops. I screwed that one up good. I must’ve been tired this morning.

Don’t forget Canadian Michael Buble’ who drives a BMW convertible which was NOT made in Canada…shows a lack of support when Canada is in a time of need. Shallow performers.

Since Buble’ has dual Italian-Canadian citizenship, maybe he should drive a Jeep Renegade.

hmmm … Corollas used to be made in Calif, then in the 2000’s I thought the Corolla production was moved from Calif to Texas. Did they later move it from Texas to Canada? Or are there still Corollas being made in Texas?

The Fremont (California) plant made various Toyotas, but the majority of its output was Tacomas. They never would have has the capacity to make more than a small minority of all the Corollas sold. Mexico seems to be the choice for most carmakers to build their small cars. Though the current Corolla isn’t all that small.

I guess it makes sense as the smaller cars are sold in large numbers throughout Latin America as well as the US and Canada. Most makes build their bigger (often mid-sized) cars in the US, as well as SUVs, the biggest market for those vehicles. I knew it was a strange world when Hyundai and Kia started making cars here some years back. Then exported some back to Korea.

Fremont made plenty of Corollas - all station wagons; Matrix and Vibe. I hope that Toyota can adjust production and put high value products in place of the Corolla so that the workers can retain their jobs.

I suppose you could count the Matrix as a Corolla, though it wasn’t labelled as such, even if it was essentially a Corolla wagon. I wish they had kept making the Matrix as it was a very handy size and configuration. Toyota never figured out what to call it, a wagon, hatchback, SUV/crossover?