Issue: Car turns over but won’t start. If I can get it to start, it will stall out at every stop, when I place in neutral this sometimes prevents the stall out.

Check engine light on, codes read varies, mostly cylinder three missfire(not sure this is accurate, I just think whatever is happening is causing that and throwing the code?)

No rocking in engine, idle mostly sits at 1 rpm, sometimes, and I am guessing with my terminology, when it breathes, the engine will idle about 3/4 rpm for a brief moment.

It has an issue with its get up on the high, and on inclines.

Can smell the gas in the engine compartment, so I am assuming the engine is getting gas. No oil in the radiator reservoir.

Any Idea’s or should I get it to start one last time and send it through the dealership window?

Have you pulled the #3 spark plug and taken a good look at it?

A dirty throttle body can cause hard starting/stalling.

As far as the other problems, we need more detailed information.

Not what you think codes are being displayed.

I am not familiar with your vehicle but, you really should not be smelling gas under the hood. I would check for vacuum leaks. make sure the hoses are not cracked or dry rotted. I have heard that the pcv valve on those engines are problematic and need to be replaced.
there are more qualified on here that can help you. best of luck.

Any Idea’s or should I get it to start one last time and send it through the dealership window?

This thing is way out of warranty so I have no idea what you mean by ’ send it through the dealership window '. No offence but you need a good independent shop to look at this and I also agree that you should not smell fuel .

I meant, crash it through their window and tell them they can have their car back…

I was expressing my frustration sorry.

I was as detailed as I could be, I’m not a mechanic, the next stop is the mechanic, I’m just trying to gather as much information as possible, and I do understand that is problematic on this platform without someone familiar actually taking a physical look.

You bought a 13 year old vehicle and it probably was sold 'As Is ’ without any kind of warranty . This dealer may not have known if it had problems or it ran just fine and they just sold it .

I own a 2009 Corolla with the 1.8 liter, although not an S type, and no, you shouldn’t be smelling gas so I’m guessing there’s a leak somewhere. I am not a mechanic but I suspect the two issues are connected, i.e., the engine is starving for fuel.

… or, the gas is not being combusted correctly.

or, the gas is not being combusted correctly.

In which case it ought to be going out the exhaust pipe and not remain in the engine compartment.

I just took the hoses off the throttle body, and the fluid that came out when disconnected was yellowish, but smelled like nothing, ie water (nm, those are the collabt hoses, not a mechanic) 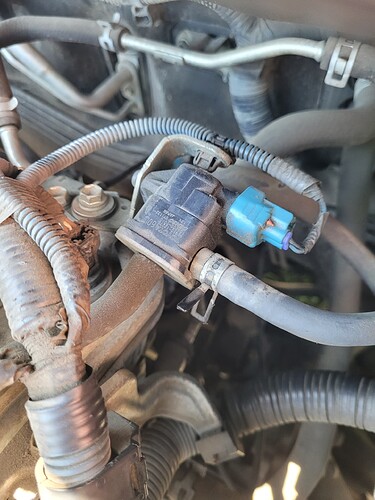 What about this? Making an assumption it’s a part of the throttle system, the throttle bottle doesn’t look mechanic except the valve.

My guess, all of the symptoms are the result of the misfire. Misfire means gasoline is injected into the cylinder, but it doesn’t ignite, then it is pushed out the tailpipe. That’s why you smell the odor of gasoline. The way the computer determines a misfire is by checking the acceleration of the crankshaft after a putative firing. If it doesn’t accelerate, it thinks there’s a misfire. Sometimes it gets confused about which cylinder is actually misfiring tho, so consider the possibility the problem might not be number 3, but a different cylinder entirely.

Purchasing a 2009 Corolla hardly seems a poor decision. One of the best econobox cars ever made. If you didn’t get a pre-purchase inspection, that might be where your used-car-purchasing system failed you. But not the make/model/year.

The way mechanics diagnose typically misfires is to interchange parts cylinder to cylinder to see if the misfire moves to the other cylinder. Coils, wires, fuel injectors, etc. If swapping parts yields no info, next step is a cylinder compression test. Noid tests common too, to see if injectors are actually being fired by an electrical pulse. You are always welcome to report the results of your experiment’s here for more ideas. Until you get the misfire problem solved, no chance of solving the others. And solving the misfire might well solve all the others. I have the sense you are over-worrying a little. Suggest to discontinue replacing parts and instead focus on finding the exact cause. One problem with the parts replacement idea, the new parts may not work, so you are just making the diagnosis more difficult. It’s also very easy to run out of money before running out of ideas what to replace.

A single cylinder misfire shouldn’t cause stalling or hard starting. If you’re smelling gasoline in the engine compartment then there must be a leak, or else your exhaust is leaking and unburt fuel is leaking out before it goes out the tail pipe.

Have you tried unplugging the oxygen sensors to see if that changes how it idles?

Misfire means gasoline is injected into the cylinder, but it doesn’t ignite,

Or no fuel is injected, or there is not enough compression

Sometimes a spark plug will look ok appearance-wise, but have a crack in the ceramic or internal disconnect so that’s another idea for OP to test by the swap method. When the spark plug is removed, the tip appearance can be diagnostic as well. If OP could obtain a fuel trim test, that might be helpful.

Frankly I have no idea that part is. Again, I am not a mechanic. No offense but I think you’re in over your head and you need the services of a pro with hands on the vehicle.
I’ll echo the sentiment that a 2009 Corolla has the potential to be a great little car. Mine is going strong at 131k with mostly just routine maintenance. If you can get whatever’s wrong diagnosed and fixed yours could easily serve you well.