Hi, First post. I have been looking for quite a while for some sort of Toggle Switch for my 12V lighter socket in my ford fusion 06. The cabin 12v socket does not turn off after seemingly any time so I’m afraid my battery will drain if I leave anything plugged into it.

So the question would be, is there a commercially available “toggle switch” that could be plugged into the socket and have some form of switch to toggle power to a switched socket? Right now I’m just unplugging my radio transmitter every time I get out of the car for more than a few hours, but I can see the connector is being worn out by the repeated abuse.

I suppose if there is nothing like that commercially available I could DIY one, but I’d rather a more finished product if it exists.

Sorry to be a stickler but, is it really that hard to remember to unplug something? You’d still have to remember to flip the switch.
Same amount of effort flip switch vs. unplug.

Right now I’m just unplugging my radio transmitter every time I get out of the car for more than a few hours, but I can see the connector is being worn out by the repeated abuse.

As said, my issue is not remembering it, my issue is that the connector is being visibly worn out from constantly unplugging and re-plugging it. 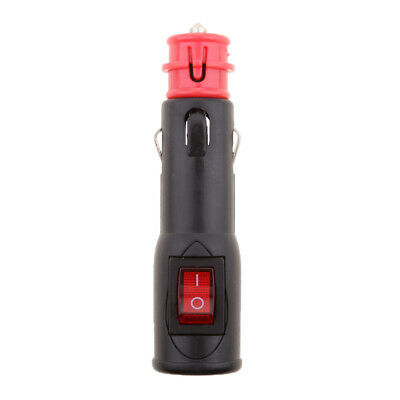 Your transmitter does not have an ON-OFF switch of its own?

To follow up on Mustangman’s comment, though you don’t say what radio transmitter you have, CB radios are often hardwired into the vehicle’s electrical system. No power drain when radio is off.
If you still want to install a switch, just add a SPST toggle to the positive lead to the power outlet.

It seems that having an on/off switch and leaving the instrument in the vehicle will invite theft .

Amazon has this, with many identical-looking products from other companies as well.

I agree with VOLVO-V70 that leaving electronics in sight might not be the best idea.

A FM transmitter costs $15 to $30, less valuable than a dash camera.

A FM transmitter costs $15 to $30, less valuable than a dash camera.

How much does a broken window or damaged lock cost?

Funny enough I actually purchased this item! It is not what it looks like, it is the wrong type connector on the end as well as being a bare connection inside. Would need to add parts and I’m trying to get something premade if possible.

and it does not, unfortunately, have a switch of it’s own.

Right, It’s a pretty cheap little adapter, and I only really park my car for extended timeframes at home, in my garage.

How much does a broken window or damaged lock cost?

People leave things of value in their vehicles, child seats, dash cameras, clothes etc. Do you hide your sweater and cell phone charger in fear of burglary when you park?