I had a flat tire while driving on the highway, tire on the driver’s side, the damage was on the inside of the tire and the top, see photos- I did not drive over or hit anything before it went flat. The wear on the rest of the tire is even. 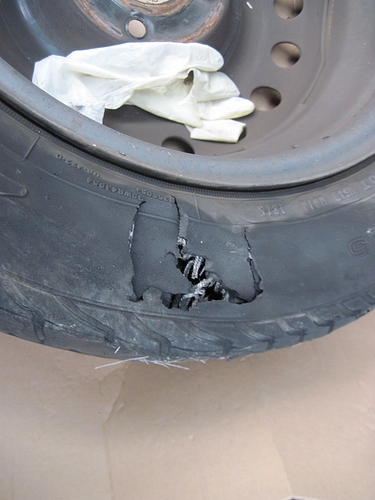 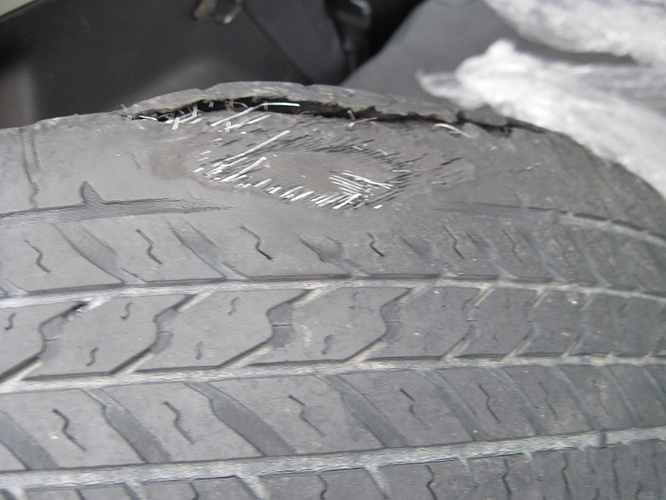 Don’t see any pictures but the tire shop will have the best guess as to the cause . And that is what it will be , an educated guess based on past experience.

That second picture appears to show severe cupping of the tread. If cupping is ignored until the tire’s cord is exposed, catastrophic situations can take place with the tire.

Cupping of the tread can be the result of bad alignment, or possibly even bent/damaged front-end components. I strongly suggest that you go to a good front-end specialist before the replacement tire also winds up in this condition.

unfortunately the roads here are all in bad need of repair, lots of potholes or uneven repair jobs, it’s not easy to
distinguish if the tires are the problem or the roads

If the roads are in bad condition, that WILL lead to bad alignment, and can result in damaged front-end components. Although that tire’s tread was badly-worn all around, it is clear that severe cupping took place in one area, and you need to have the problem diagnosed through an examination of the front end by a competent mechanic.

Considering the dry rot cracking clearly visible at the bottom of the tread surface, I’d say you are lucky the failure was localized to the one spot.

Check the suspension components for wear or damage, check the alignment and don’t drive on tires that old.

i did not ask the young employee at the chain store, thanks

thanks for the advice

Just so you know: I am a retired tire engineer. Among the things I did was analyzed failed tires.

This damage was the result of an impact that took place many, many miles before the tire blew out. It would be nice to see the tire in person, and to have the tire dismounted so the inside area between the sidewall and the tread could be examined - but since we don’t have that, what was likely to have been observed would be a “pinch” mark. That would be where the tire was pinched between the rim and the road. That would have damaged the innerliner so that the pressurized air was leaking into the casing. That separated the cords in both the sidewall and steel belts - and that is what you are observing in the photos.

Was the age of the tire a factor? Only to the extent that the tire was a bit weaker due to the age, but the age and the deterioration of the rubber was not a factor in the failure itself.

I see one wear bar in the lower right of the second photo. It is on the outer part of the tread pattern, and it looks like you needed new tires anyway. I also see no tread where the tire belt is showing. I think you may have uneven wear with most occurring on the inner side of the tire. Couple the wear with having hit something on the road at some point, and the tire happened to blow out at this time.

I did not drive over or hit anything before it went flat.

…that you know of.

Capri is our local expert. My wife bought a couple year old used car. On the freeway one of the tires blew out. I saw it in the trunk but didn’t bother to inspect it. We just put on four new tires the next day. If I recall they had a lot more tread left than this one. Regardless of the cause, the end result is the same-four new tires.

Dad went thru accident scene in his motor home. Got flat. Had aaa change tire. I looked at tire which was on rear tire carrier and it had a chunk of metal about the size of my thumb sticking out of tread. 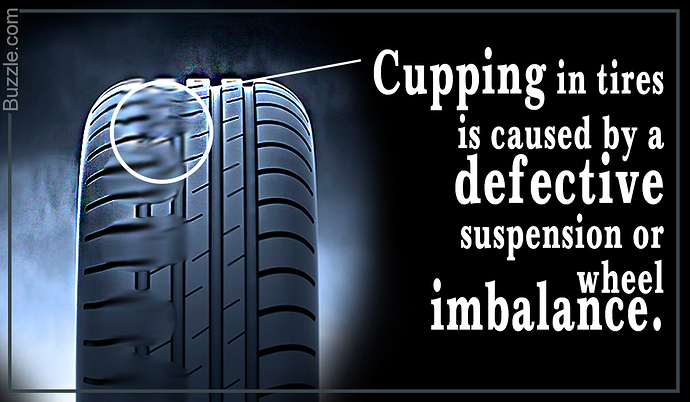 Yikes! That was pretty bad.

it will be a challenge to find a good specialist, thanks

i meant on the day it happened-

I hit several bad potholes over time, sometimes when they were filled with water and new ones that came up too quick

yes, the tire was bought new in 2015, yes, hot and humid climate
thanks

interesting and experienced based information, thanks

I experienced that kind of heavy car bouncing the last 10 seconds or so before the tire went flat, I immediately got off the gas pedal