Probably many more than 50 people killed. One whole police department was reportedly wiped out, with no mention of the lost officers’ names by Chinese officials. They’re trying to suppress the actual death toll.

There was an aerial photo of the scene in today’s paper. The crater from the explosion is massive.

Comments on social media criticizing the government were promptly deleted, and for much of the day the city’s main news channel played Korean soap operas, prompting ridicule on social media.

The Tianjin Internet Police issued a warning that those who spread rumors about the fire would be “severely dealt with according to the law.” 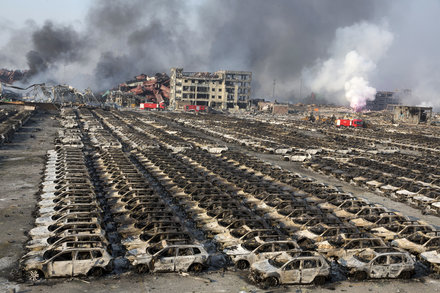 As Fire Smolders in Tianjin, Officials Rush to Stanch Criticism

Questions loomed over how the toxic chemicals that exploded in fireballs could be stored so close to congested residential areas.

If it was North Korea, you’d be eaten by the dogs. Don’t know what they do in China but probably similar-you just don’t hear about it. Yes and way back remember the China-Clinton incident where we let them get away with spying?

Let them get away with spying…LOL. They’ve hacked every major defense contractor, stolen huge volumes of industrial secrets, and just recently hacked the Office of Personnel Management system and stole personal data on millions of government employees, all via the Internet. We probably know only the tip of the iceberg.

MikeInNH: I remember a documentary of the Texas (also Ammonium Nitrate) explosion. Info is easy to find.

The Texas City disaster was an industrial accident that occurred April 16, 1947, in the Port of Texas City. It was the deadliest industrial accident in U.S. history, and one of the largest non-nuclear explosions. Originating with a mid-morning fire on board the French-registered vessel SS Grandcamp (docked in the port), her cargo of approximately 2,300 tons (approximately 2,100 metric tons) of ammonium nitrate detonated,[1] with the initial blast and subsequent chain-reaction of further fires and explosions in other ships and nearby oil-storage facilities killing at least 581 people, including all but one member of the Texas City fire department.[2] The disaster triggered the first ever class action lawsuit against the United States government, under the then-recently enacted Federal Tort Claims Act (FTCA), on behalf of 8,485 victims.

MikeInNH: I remember a documentary of the Texas (also Ammonium Nitrate) explosion. Info is easy to find.

We probably saw the same documentary…I was just wondering what it had to do with low wages!!! An accident like that can happen anywhere.